Warsaw may be the current capital of Poland, but the hilltop castle of Wawel remains it’s true heart. Coronations and royal burials continued to take place here and the cathedral is the most important in Poland.

In some ways it is a little like Windsor Castle with its Royal Palace, collection of armour and weapons, important churches and a view over the local river. In this case a wide sweeping bend of the Vistula.

The castle was the seat of power until 1596 when Zygmunt III moved the capital to Warsaw. A rather interesting connection for me here is the fact that Zygmunt (Sigmund) was from the Swedish ruling house: the Vasa family; who were responsible for the boat that Johnny and I saw in Stockholm.

Entrance to the grounds is free but no large bags are allowed in the chambers—these have to be left in the consign to the rear of the complex. I came to the conclusion that it was easier to queue for tickets at the offices inside the grounds than at those at the main entrance.

Individuals are only allowed in at certain times and in batches of 10. Thus when you get your ticket for part of the complex it will have marked on it the time you have to be there to be allowed in. If you don’t arrive—tough. Thus the route of your visit is a somewhat organised for you.

After a sloping entrance from the main street the visitor passes the cathedral on the left and comes out into the main courtyard.

Here you will find the main ticket office, souvenir shops and cafés. If you do not already have one, a small plan of the complex comes with your entry tickets.

My first visit was to the State Apartments which are famous for the collection of over a hundred tapestries. Interesting to note that the English use the word Arras for such a thing because that was where many of them were made, and the French say Tapesserie de Flandres.

Whatever the name, some of these Arras are spectacular not only for their complexity of content but also their size. Sadly nothing can be done to preserve them as the silk will in time decay.

There is also a French connection with the castle. Henri a son of the French King Henri II came to Poland in 1573 to take up the throne (An elected position) and to be married to Anne Jagiellon. He discovered however that she was all but old enough to be his granny. He snuck off back to France and became Henri III instead.

In the throne room a number of painted heads of various personages are set into the ceiling. One of them being a gagged woman !

The Crown Treasury contains a medium sized collection of armour and weapons including the serrated sword used in the crowning of all Polish kings from 1320.

The Wawel Cathedral is the most important in Poland and John Paul II conducted his first mass as Archbishop of Kraków here.

Started in the 10th Century by Boleslaw the Valiant it was rebuilt a number of times before it finally took its current form in the 14th Century.

As you enter the cathedral on the left hand side you will see some large bones hanging on the wall. These are from the dragon that used to live in the caverns under the hillside—honest.

The interior of the cathedral is breathtaking in its elegance and weight of ornamentation. The route takes you around the various chapels each seeming to try and out do its neighbour.

When you come to the Zygmunt Chapel you realise that the others were wasting their time. This golden domed masterpiece by the Florentine architect Berrecci is dedicated to the last of the Jagiellon dynasty, Zygmunt I The Old and his son Zygmunt II August.

In the crypt will be found the tombs of other Polish rulers including poor old Anne Jagiellon left in the lurch because Paris was more enticing than she—though from the pictures on the walls in the castle you could say that Henri had good taste in cities.

Also in the crypt are the tombs of the national hero Tadeusz Kosciusco who has a mountain named after him in Australia, Prince Jozef Pontiatowski from the Napoleonic era and, Marshal Pilsudski who is considered to be the founder of the modern nation. 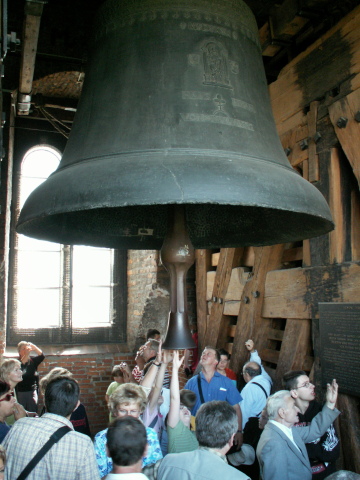 Going in the other direction you can climb the bell tower for some good views over the city and a chance to see the largest bell of the middle ages—all 8 tonnes of Zygmunt III. The clapper alone weighs 350 kilos and it takes eight men to ring him.

Touching the clapper with your hand supposedly grants you a wish. As the bell hasn’t fallen on anybody’s head whilst they have been underneath it—the wish giving obviously works.

If you fancy a clamber down more stairs you can leave the castle hill by way of the Dragon’s Cave which takes you down to the river side (It is a one way trip). These caves were at one time used by Austrian Troops for meeting up with the seamstresses of the town, who would mend their socks etc.

At the lower entrance is a fiery dragon who belches flames every few minutes.

All in all I can say that I had a really good holiday in Kraków and am already looking forward to going back again in January to see it in the snow.