A look back at Poland

All this talk of snow and cold temperatures has reminded me of the winter visit to Kraków seven years ago — doesn’t seem like seven years. So, as the old pages came down when I changed format, I thought I would put them back up again and add a few more photos at a higher definition.

Following my trip to Poland in August my father expressed an interest in going to see for himself. I looked at the Wizz Air Web Site and found that we could go for his birthday in January for about 50€ each (tax included).

They were well warned that it would be very cold and Jean-Jacques was asked if he would like to come along as well. Hats, coats, gloves, scarves and boots sorted, the four of us set off for Beauvais Airport and the longish trip to Kraków.

After a reasonable flight to Katowice Airport we stepped out onto the tarmac and into the snow. It wasn’t as cold as we had expected but minus ten was still a bit of a shock to the system.

We had some terrible freezing fog on the way from the airport with visibility suddenly dropping from good down to fifty metres within a matter of moments. The mini bus was warm enough but we had to scrape the ice off the inside of the windows to be able to look out. Along the roadside most houses still had their festive lights up and with the snow it was all very picture postcard: when you could see it.

We were dropped off at the new bus station in Kraków and organised two taxis to take the four of us and all our luggage to the hotel. Once again the thick fog didn’t help matters, and whilst I think the drivers sort of knew where they were trying to get to, the lead driver, with my parents, obviously didn’t know how to actually get there by the most direct route.

To make life simple we had opted for the same hotel that I had used in August and we found ourselves in adjacent rooms on a short landing with our own set of steps down to the ground floor. 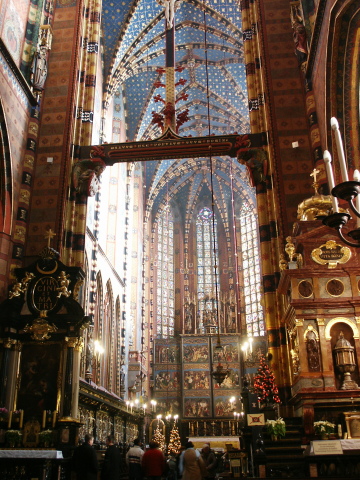 Despite the cold the first morning turned into a sunny day and we set off down to the riverside to get our bearings. All was well with dad until we got to the river bank where the first really biting wind came whistling off the partially frozen river.

We turned about and headed up towards the main square. There we listened to the trumpeter sounding the hour — complete with digger accompaniment before an old man all but pushed us down the side of the cathedral to get a better acoustic. It has to be said he was right and we managed to listen again without the digger this time.

The Great Square was having worked carried out on it, but it was still very different from August when it was filled with flower stalls and people sitting outside drinking beer and coffee. Now it had been scraped clear of snow and people were not hanging about as they crossed its expanse.

Having visited St Mary’s Cathedral we started searching for badly needed hot coffee. We found a small café which did a good cappuccino and excellent cakes. My parents went for the hot, spiced apple cake with ice cream. JJ stuck with chocolate.

Starting a bit of a tour of the town my dad picked up some mittens to replace his gloves which he had decided were useless. We walked around the snowy garden circle towards Wawel Castle.

I had suggested that as it was sunny we should try and take some of the views whilst we had the chance because other days were expected to be foggy.

If the market square in winter had been a bit different to the last visit the central courtyard at Wawel was almost a colour photo turned into black and white — but with lots of white.

The sun was beginning to set, adding a reddish hue to the snow and on that note we walked back down to the hotel. The scene had been set and we had found that well wrapped up, the elements were bearable.