It is hard to take in the figures

Approaching the industrial town of Oswiecim between Kraków and Katowice I found that railway lines took on an entirely new significance. The entrance to Auschwitz II at Birkenau is as familiar as the Eiffel Tower or the Houses of Parliament.

No amount of words or photos could ever do justice to this subject, if you would like to know more I would suggest visiting the official site which is linked at the bottom of the page.

I had done my homework for my visit to Auschwitz on the Tuesday so I was in many ways prepared for the rather ordinary look of the original camp—Auschwitz I.

This used to be a Polish Army barracks and the buildings were simply increased in height to accommodate the prisoners, most of whom were Polish political prisoners and Russian POWs.

Trees line the streets between the barrack blocks and anybody familiar with a barracks would think it normal until you take in the electrified barbed wire.

Just outside the fence is Commandant Höß’s house, from where he could listen to music played by the camp orchestra.

Within a few hundred metres of his home and inside the camp are the punishment cells where people were left to starve to death or awaited a firing squad, and the camp mortuary which would be turned into Gas Chamber I.

Perhaps rather fittingly between his house and the gas chamber you can see the gallows where he was executed after the war.

His accounts of camp life from the SS point of view contain no sense of remorse but rather a sense of being asked to do too much with the limited equipment available.

The two camps at Auschwitz are in fact a few kilometres apart and very different in character. Auschwitz I is an old barracks turned into a prison, whilst Auschwitz II (Birkenau) is an enormous camp, built and intended purely for the purpose of exterminating people.

This is not a place where people died through lack of care, this is a place where hundreds of thousands of people were simply processed. A factory for turning living tissue into ash, and redistributing purloined wealth.

Rather sadly with the 60th anniversary of the liberation of the camps, the number of visitors has increased and this has the reverse effect of preventing you from taking your time to take in the facts and figures.

The press of the crowds was particularly constricting whilst visiting the barrack blocks, many of which have been turned into exhibition rooms.

Here models explain the system of extermination and rooms display items taken from the last victims.

In one display were thousands of kilos of human hair destined to be used for making material to line jackets.

The Red Army originally found 7,000 kilos of hair all neatly packaged and ready to send off for recycling.

In time it will slowly degrade and disappear.

Faces on the walls remind you that these are not simply macabre displays like some chamber of horrors but the results of a perverse ideology that managed to gain enough followers to make it work.

The monument at Birkenau quite rightly states that this place should be not just a cry of despair but also a warning.

The one thing that the Nazis feared more than ever was the possibility of disorder.

To this end, trains were greeted by people playing football, instructions to ensure that luggage was suitably marked—remember where you have left it.

The same went in the selection process. Those who were old and weak would be found lighter work to undertake, just hop on the lorry and we will take you up to the showers.

Sometimes the inmates who worked in the camp would try and ensure that mothers gave their children to older people so that they would appear able to work. Children and the aged went straight to the gas chambers.

These working inmates— the Sonderkommando—may well have had the worst of it, because they knew what their fate was going to be within perhaps weeks. But hope springs eternal and it was better to work in the crematoria and hope, than give in to despair. 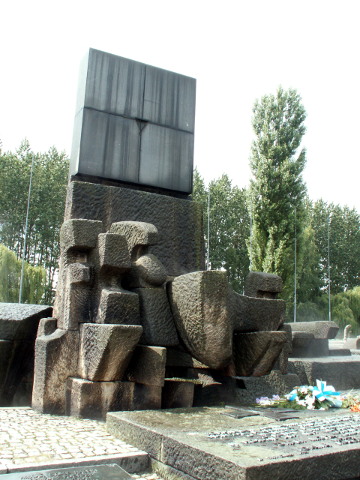 The monument to the dead

Just as we arrived at Birkenau it started to rain—a downpour for about twenty minutes.

The ground swiftly turned to mud, and we were all well drenched. It rather reminded me of many of my days on the battlefields of the Somme.

The old wooden stables used as housing for hundreds of thousands of prisoners have gone leaving behind just a field of brick chimneys.

This sight probably gives a better idea of the size of this place than ever walking between the rows of buildings could ever have done.

Looking down the tracks towards the entrance of Auschwitz II (Birkenau). Visitors take the same walk as one and a half million others once did—towards the gas chambers.
The Visitors of today — leave again

The gas chambers here have been destroyed but their shells remain there and you can see the steps leading down into the so called changing rooms.

From there 2,500 people at a time would be ushered into the shower rooms.

Twenty minutes later they would be dead, and within twelve hours they would have been processed into ash, the facilities cleaned out and made ready for the next train.

As we reached Gas Chamber II at the head of the railway line, the sun came out again and steam started to pour off the ruins and the monument next to it.

Ghosts of the past perhaps.

On the way down towards the gas chambers, prisoners walked past the reservoir for use by fire fighting teams.

As government buildings the extermination camps were insured and therefore had to conform with fire inspection regulations !