Unlike many towns in the old Eastern Block, Kraków, has managed to retain its identity and style. The mediaeval buildings and tiny streets are enclosed by a garden which surrounds the centre following the old fortified walls.

Within the garden ring the town is pedestrianised and from my hotel in Kazimierz I walked through the small market place (Rynek Maly) and into the Rynek Glówny—or great market.

This enormous square is 200 metres on each side and was one of the largest of the Middle Ages. In the centre stands the Cloth Hall which now houses about all the boutiques that a tourist and searcher of souvenirs could wish to find. Unlike the days of Communism where everything had a fixed price—now it does pay to look from stall to stall for the best deal.

On the square itself you can stop and have a coffee or beer, whilst watching the flower sellers, people feeding the pigeons, and listening to the trumpeter sounding the hour from the tower of the Mariacki Cathedral.

The trumpeter is a link to the past when alarms were sounded for the Tartar invasion in 1241. Hit in the throat by an arrow the trumpeter was cut off in mid note and today the melody ends just as abruptly. A bit of folklore perhaps, but enough to have become a symbol (The Hejnal) and the equivalent of Big Ben at midday on the radio.

The cathedral is the Parish Church of Kraków and obviously has links with John Paul II who was Archbishop of the town.

The interior is stunning in its richness. The stalls are carved and a little reminiscent of Amiens cathedral. 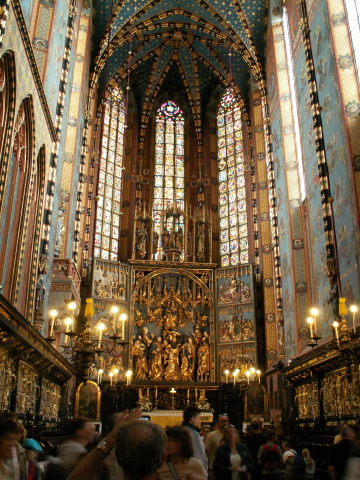 The interior of the Mariacki Cathedral

Non-worshipers have to pay to visit this part of the cathedral and as in many places you pay about 10 zlotys extra if you want to be able to take photos. The attendants are very quick to pick up on people not displaying a camera sticker.

On the square is another, much smaller, church dedicated to St Adalbert who set off to convert the Prussians in 995 and found them unreceptive enough to make him a saint.

Leading out of the square are the main shopping streets. One heading down towards the Wawel Castle and the other to the east towards the Florian Gate and the Barbican.

The Florian Gate was the main gate of the city for centuries and the Barbican has recently been renovated.

The purpose of the Barbican was to act as an enormous front door to the city. Visitors had to approach it from the side making them vulnerable to defenders on the walls. Once in the courtyard they were surrounded and could be checked and searched before being allowed to cross the wide moat through the Florian Gate.

Something I did think about the shopping in Kraków, was that the range of goods was greater than Moscow. There were things available for everybody and not just the very rich. The shopping streets were also more consumer orientated with displays on the streets and staff looking to sell things.

Everywhere you go there are small stalls selling bread rolls for about a zloty. Sometimes plain, sometimes with poppy seeds, they make a change from crisps for something to nibble when hungry.

There are churches galore in Kraków as befits a nation that is highly religious as well as numerous museums and galleries. I had intended to visit the National Museum but they must have seen me coming and closed for renovations the week I was there !

Wandering around the Planty Ring is almost a lesson in history with statues to numerous important figures including the astronomer Copernicus who studied at the Jagiellon University.
The Salt Mines

The guide books say that they are very touristy but worth visiting. On my walks into town I noticed that I could take a mini bus for 5 zlotys return as opposed to forking out lots of money for a guided tour bus which was going to make me pay the entrance fee anyway.

I managed to communicate with the driver as to where I wanted to go and within a few minutes he decided that he had enough passengers and off we set. The route is directly south for about 25 minutes so the fact that we were stopping en route didn’t greatly inconvenience me.

On arrival at Wieliczka Mines it is quite obvious where you have to go to get tickets and there are numerous boards up explaining things in a number of languages. English being the preferred language of foreigners I noticed.

Most of the group I was with were not native anglophones.

As in many places, if you want to use your camera you have to pay for an extra ticket. For all that it costs and the difficulty of taking photos in the dark, I thought it was worth while.

The tour starts with a descent of nearly 300 stairs down to a level of about a hundred metres underground.

What is difficult to accept (unless you try licking it) is that everything is salt. The reason it looks black is because of the other minerals, but the statues walls and floor are all salt.

According to legend (Polish for very, very true) in the 13th Century, the Hungarian Princess Kinga set out to marry the Polish Prince Bolelslaw. For a dowry she decided to give the Poles something that they needed and to this end she had her engagement ring thrown into one of her father’s salt mines.

Sometime later salt started to be properly mined here at Wieliczka and one of the workmen recovered Kinga’s engagement ring in one of the mine faces.

A statue commemorates the event and a chapel was created in the salt over a thirty year period at the turn of the 19th century. 54 metres long and 12 metres high it is hard to believe that all of it has been created out of salt. The floor which has the appearance of polished marble is the chamber’s natural floor carved to look like tiles.

The chandelier frame may be of wood but the actual beads are cut from the purest salt in Poland which can only be found in this mine.

Whilst the site may be filled with tourists you would really miss out on some stunning views if you failed to come here. One of the halls is over thirty metres high and held up by what I could only describe as two wheat sheafs of scaffolding.

Think giant caves, then think carved salt. You even get a lift to take you back up again.