They don’t have a changing of the guard as such at the Presidential palace but what they do each Sunday is formally change the flags outside.

As we walked down the street it was raining and becoming quite heavy with it but on arriving in front of the palace we found some shelter and waited on Vytautas to arrive. Whilst standing there a group of Asians arrived and pressed in front of us with their brollies and it became impossible to see anything.

I was on the point of thinking : Well sod this ! We were here first, when they moved off again after a brief explanation from their guide. Vytautas arrived and we joined him in front of the three flagpoles which carry the flags of the European Union, Lithuania and NATO and watched as three servicemen unlocked them passing the key from one to the other.

How interesting can changing a flag be ? The question did occur to me. As it turned out it can be very interesting. First of all a group of soldiers in medieval armour arrived on our left, Vytautas assured us that it was fine to go and get our photies taken with them but we were not happy with the idea as it seems disrespectful to the soldiers — even if they are aware that it is going to happen.

Then, on came the troop of soldiers, airmen and sailors for the ceremony itself. They were accompanied by a single side drummer who controlled the movements by drum beat.

Down came the flags and then with an intricate pattern of drill movements they were folded up. It was very clever the way each six-man team rotated in time with the drum in order to change the the direction of the fold in the flag.

The old flags were exchanged for new ones and the reverse of what we had just seen took place to hook the flags to their cords. Then, following the only spoken words of command, the three flags were raised on the masts and the world saluted. The squad marched off and the three bearers of The Key returned to lock up the flagpoles.

It hadn’t taken long but had been quite impressive — and faultless.

Takes a moment to load

The rain had eased a little bit during the ceremony but now as we walked to Vytautas’s car it began to pick up again. Must be time to go somewhere picturesque.

We drove out the road towards the north of Vilnius with poppies lining many of the roads. I was amazed. Poppies have become such a symbol of the fighting on the Western Front here in France and Belgium that the idea that they grow elsewhere is inconceivable.

Along the way we also saw a number of stork’s nests up on poles. Jean-Jacques says that they have them out in Alsace, very pretty and all that — just don’t park you car underneath, you think pigeons are bad !

Then, there she was, on the side of the road, tranquilly grazing on the grass : Lithuania’s State Cow. The first, last and only cow we saw during our stay. They might have a fine dairy industry in Lithuania but there does seem to be a severe shortage of cows to keep it flowing. I wonder what Ermintrude is in Lithuanian ? Are dogs called Dougal ?

Forty or so minutes took us to our destination — the former capital of Lithuania.

It was wet, which was an awful shame because you need sunshine to truly appreciate the vista. Lithuanians consider Kernavė as their Troy (but without Brad Pitt). Perched above the Neris River (the same river that runs through Vilnius) they created five hill-forts.

The site reminded me a little bit of Emain Macha at Navan near Armagh. A once thriving town and political centre has simply disappeared, to become an archaeological site.

Kernavė is not just the traces of forts, burial pits, palaces and craftsmen; it also holds an important place in mediaeval history as the last pagan capital of Europe.

Sadly, this was all rather lost on us as we huddled around the map explaining the layout of the site. It was tipping it down. We walked down the slope towards the nearby cluster of four forts (the fifth was a little further off) and whilst Vytautas and I climbed to the top of one for a view of the river, mum and dad climbed back up the slope to gain some shelter.

Lunch called and we stopped at a roadside restaurant which offered amongst other things : pork with a runner-bean, or for a blow out meal : salad with a salmon. Couldn’t eat a whole one !

By the time that we had returned to Vilnius the sun had come out, the streets had dried off and it had the makings of a fine evening for our farewells.

We decided that we would try the Žuvinė fish restaurant at the Town Hall. It looked expensive but that is what last nights are for.

We got ourselves pretty well packed up and ready for the morning and then went for our final walk into the square. The evening was warm and sunny and we took the long route up the hill past the Barbican, along the old walls and then through the Gates of Dawn, just opposite the building with the burnt roof (our, nearly back to the apartment landmark).

A last chance to wander along looking at the amber shops, church domes and other tourists heading off to eat.

Arriving at the restaurant we were not certain that we were at the right door because we seemed to be arriving via the kitchens. A waiter appeared and asked if he could help and we said we were waiting on a friend — Yes, friend here ! — and led us to our table where Vytautas was awaiting our arrival all dressed up for the evening.

One look at the cutlery and table cloths and we were confirmed in our impression that this was the sort of eatery that we would not even consider entering back home; assuming of course that they would actually let us in !

We decided to splash out and have a glass of wine with the meal, the cost of which was somewhat extreme even when divided by three and a bit. The meal was excellent, good portions beautifully cooked but they obviously haven’t cottoned onto the idea that sea-bass should be accompanied by heaps of chips soaked in salt and vinegar — call themselves a fish restaurant ! 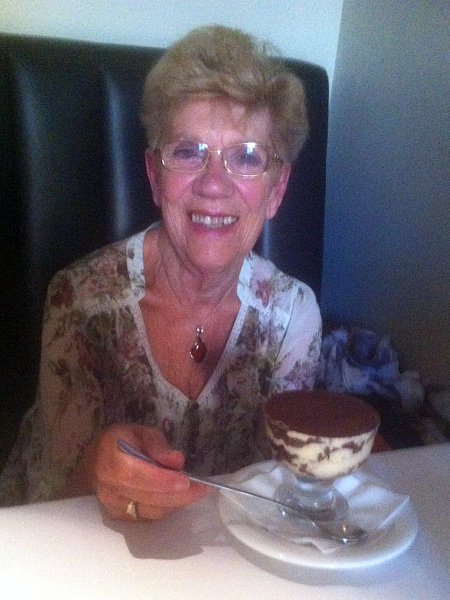 More than we were expecting

Shall we go for desert ? Flash restaurant suggests that the portions might be minuscule (even if drizzled with a raspberry coulis). Couldn’t have been more wrong. Huge tiramisu passed the ‘mother test’ and the meal was declared a success.

Not quite farewell to Vytautas because he proposed proving us with transport to the airport in the morning — and he was going to provide us with sandwiches from MAma’s Café.

So there we were. Last night done. Up early in the morning for the final weighing of the cases. I have no idea why mine was so heavy. Couldn’t possibly have been due to the bottles of Estonian liqueur, my shirts must have put on weight.

Whilst mum and I tidied up and made sure that all was good dad went downstairs to look out for Vytautas. Spotting Dmitrij in his office he mentioned that we were pretty much ready to leave. In a flash Dmitrij was off and was with us upstairs within minutes (no mean feat considering it was like entering Fort Knox). He was much more concerned about whether or not we had enjoyed our stay than whether or not the apartment was in good order.

He helped us down with the remainder of the luggage and gave us some fridge magnets to remind us of our stay. It wasn’t really necessary because if I was going back to Vilnius I would be more than happy to stay there again. Excellent set-up.

Fifteen minutes later we were at the airport with plenty of time on our hands but there is always security to get through. We were informed that the flight was pretty full and were offered the chance of having our hand luggage placed into the hold free of charge. That didn’t suit us because they all contained our breakables and give him his dues when he came along the queue afterwards he didn’t bother to ask us again.

The flight was on time, the sandwiches were fabulous, the holiday had been memorable, Vytautas his exceptional self and mother’s new best friend.