The folks head to Vilnius

Having collected my parents from England we returned to France for a couple of days of preparation before setting off to Beauvais Airport and our flight to Vilnius. Rather than park the car at the airport I decided that for a change I would try one of these parking services. It worked out slightly cheaper than the airport itself and at least we would be ferried to the car on our return.

An easy drive down, we found the parking and were loaded up onto the transit for the short trip over to the terminal. This time I was aware that I had to check from which one we were flying and thankfully it was Terminal 2 where we had been dropped off.

I am not certain why Ryanair get so worked up about the size of cabin luggage because there were numerous people in front of us whose bags would certainly not fit in the test frame. As I wanted to take some bottles with me we booked in two cases. According to the flight price it could actually work out cheaper to book your case in as a passenger and pay for a ticket than actually buy luggage space !

But anyway, we had carefully weighed our bags to make absolutely certain that our two cases were within the fifteen kilos limit and with two litres of alcohol inside, fifteen kilos doesn’t go very far.

Our flight was on time and we were met at the far end by my mate Vytautas who had taken the day off to ensure that we wouldn’t have to run about looking for trains etc. Not that taking the train is difficult, it was more the fifteen minute walk at the far end with the cases that was going to be a pain.

Fifteen minutes later we are at our apartment building near the Barbican. Our host Dmitrij had already been in contact and was aware of our expected time of arrival. Vytautas had hardly got the boot open before Dmitrij was across the road shaking hands, taking luggage, saying hello and leading us to the door. I had to be very quick to point out that Vytautas was a friend and not a taxi driver. As it was coming on eight o’clock in the evening and we didn’t want him rushing off to eat alone we invited Vytautas to dinner but he had to decide where we would eat.

That organised, off we went with Dmitrij. No signs on the wall to suggest that there were apartments, just a small panel telling us in English that our keys would fit the lock. We were warned, all doors were self locking. Once outside without a key you were doomed (doomed I say).

Through the first door, then the interior door giving access to the lift. Up to the second floor. The third door let you through to the courtyard — which certainly didn’t feel as though it was on the roof of the ground floor. Apartment No 5 was ours and there were just two more doors to get through and we were home for the next few days.

The place was spacious in the extreme with two large bedrooms (double and a twin). Equipped kitchen, TV and DVD player, washing machine.There was a bowl of fruit and a bottle of wine there to greet us and we were given instructions as to how to access the free Wi-Fi. Really excellent.

We didn’t dither too much as poor old Vytautas was outside waiting on us, so, having checked that Dmitrij and I had the necessary portable phone numbers we said goodbye, grabbed our keys (where’s you key mother ?) and went back outside. 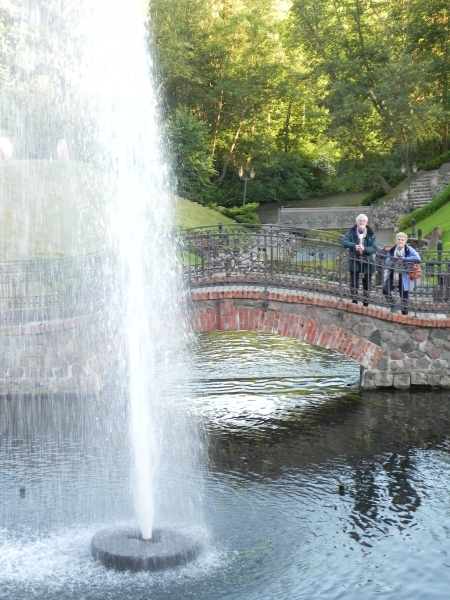 The evening was warm and sunny and we drove a few kilometres to the Belmontas restaurant, an old mill complex that I had been to on my last visit. Coming from the centre of town it was a lot closer than I remembered. Dad was impressed by the driveway which must run for a kilometre or more before you finally reach the complex.

We walked around the gardens a wee bit before heading in to eat. Lithuania is joining the Euro in 2015 so prices are now marked in both currencies. I am sure that they are going up but in comparison to what we pay for a meal in a pub, the prices are still most reasonable. Not that we knew much about the bill this night because Vytautas was very bad and paid.

He was duly warned that we owed him three meals.