The phantom of the opera 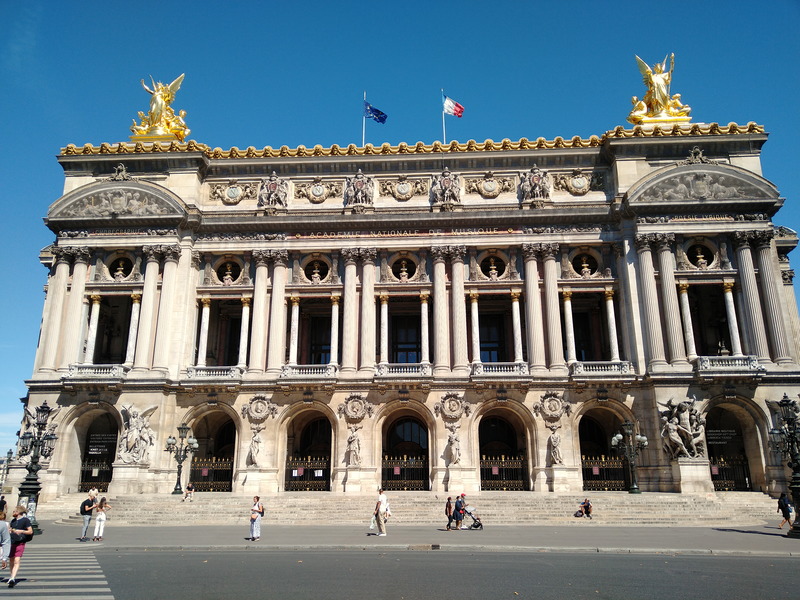 On 28 June 1669 Louis XIV granted Abbé Pierre Perrin permission to set up an opera academy. Perrin didn’t last very long at his post because by 1672 he was in prison for debts and Jean-Baptiste Lully, a close friend of the King, forked out a fortune to Perrin to take over his position. The king made life easier for Lully, by making it illegal for anybody else to present a piece containing more than two arias and with more than two instruments, without his specific permission.

Time passed, kingdoms, an empire and revolutions came and went, and the opera moved from one place to another. And then, along came Charles Garnier, who had worked in the offices of Eugène Viollet-le-Duc (the guy who refashioned Notre Dame de Paris to his own liking as well as the Château de Pierrefonds – used as Camelot in the TV series Merlin).

In 1861 Garnier won the competition (beating Viollet-le-Duc himself) to create the new opera house, a task that would take him fourteen years. His final project, built in collaboration with Gustave Eiffel, was the Opera’s set storehouse and workshops.

So here’s the thing. Garnier discovered that the water table was higher than expected and despite wells and pumps being installed the site wouldn’t dry out. To counter this Garnier created a double foundation which incorporated a concrete cistern that would collect any water and could act as a reservoir in the event of a fire. Reports had it, at the time, that the site was built over a subterranean lake. The lake is quite a size and you could put a boat on it but sadly it won’t take you very far.

Although begun during the reign of Napoleon III, the Emperor had long been deposed and Paris suffered the humiliation of Prussian occupation by the time it was finished. It was officially opened on 5th January 1875.

The style remains though very much Napoleon III, if it can be adorned with something — it has been.

Because of Covid we couldn’t just wander along and visit. It had to be done on-line, which was not a great problem but did make me wonder about how others who might not be as aware of things or connected to the Internet would manage. Anyway, I got us booked in for 1000 hours and arranged with the hotel to look after what small amount of luggage I actually had so that I could pick it up in the evening on the way to the station.

There was very little of a queue at the entrance and we all had to pass through a temperature scanner. That’s twice I have been through one of those recently and on each occasion I come up cold ! 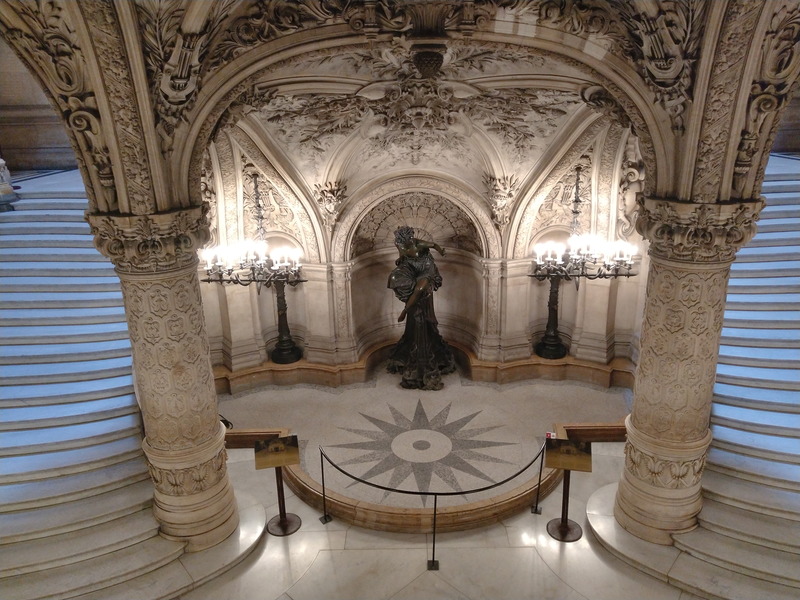 The building is as opulent as you read about and reality does not disappoint. Coming up from the Rotonde des abonnés (the entrance for season ticket holders) you are greeted by a statue of Pythia the oracle of Apollo at Delphi. She sits on her tripod ready to interpret the words of the god of music and harmony.

The statue created quite a scandal when it was created for the salon of 1870. The sculptor, Marcello, was discovered to be (pass the smelling salts) a woman ! Adèle d’Affry, duchesse de Castiglione.

Either side of her is a staircase leading up to the first floor and the grand staircase created out of white marble with a balustrade in red and green marble. It splits into two as you climb up to the grand foyer. The steps are quite low and deep allowing the ladies of the time to climb gracefully and very slowly — ensuring that they and what they were wearing were seen by everybody. 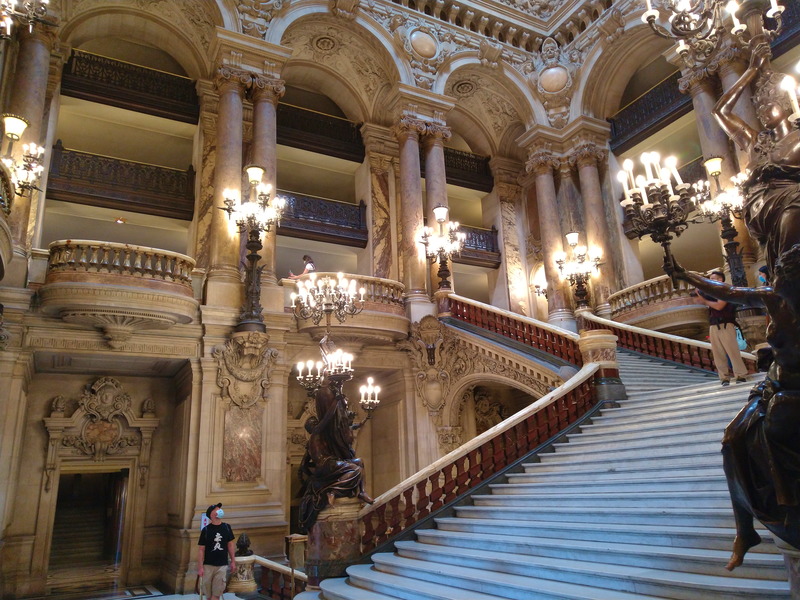 The ceiling was designed by Isidore Pils and was his second attempt. Garnier found the original designs to be far too dark for the lightness of the staircase and asked Pils to give it another go. Pils was quite elderly and fell ill during the work, which was finished by his staff on the eve of the opening as the scaffolding was scuttled away, out of sight.

Apart from offering access to the boxes and auditorium the staircase leads to the foyer, a fifty-four metre long, eighteen metre high chamber that I can only suggest was designed to ensure that no matter what anybody was wearing, or who they were, eyes would be on the room itself. 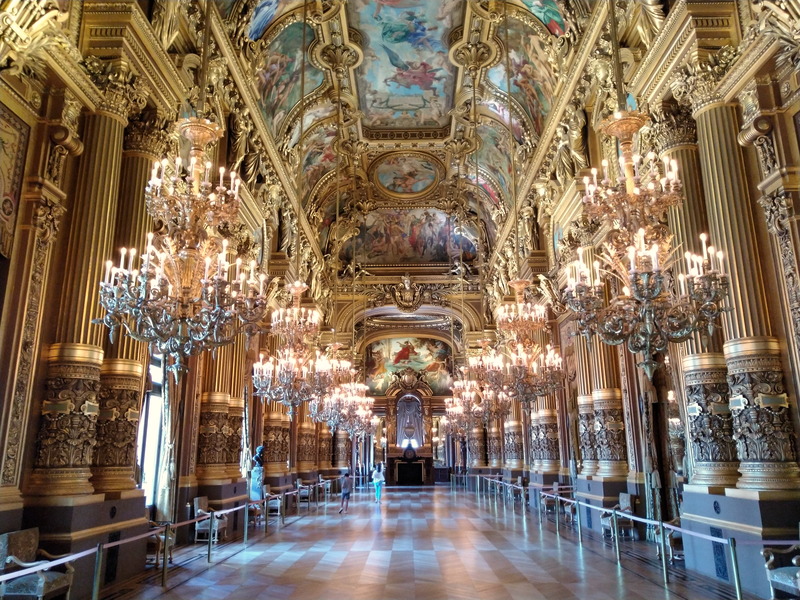 A place to mingle

The lesser chambers are positively dull by comparison. But the visit of an opera house is never going to be complete without a view of the auditorium itself and two of the boxes were open (with strict controls as to how we circulated) to allow us a glimpse inside.

The loges, as they are called in French, were designed by Garnier to be mini living rooms for the grand patrons of the opera house — who were there as much to be seen as to actually watch anything. They are very comfy with curtains offering privacy and enough space that you could eat and drink in comfort, whilst watching everybody else.

The ceiling was repainted in 1963 by Marc Chagall and, personally, I thought it was out of place and not in keeping with the chamber itself. On the other hand it’s by Chagall so who am I to argue ? 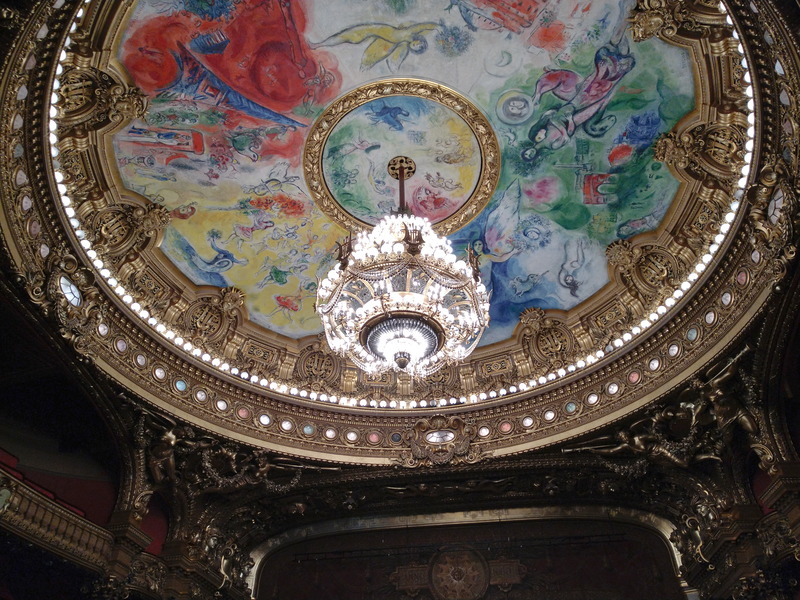 No building describing itself as an opera house would dare miss out on the obligatory chandelier hanging like an eight tonne (in this case) sword of Damocles over the heads of the audience. There are three hundred and forty lights on its bronze and crystal structure.

Sadly the safety curtain was down which lessened the opulence of the view but, over on the left, you can see Box 5, from where the Phantom would enjoy the spectacle every night before hurrying away to the underground lake. The story must be true because there is a brass plate on the door stating : Phantom of the Opera. 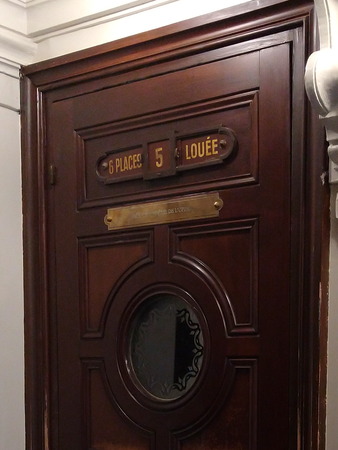 There is a maze of staircases leading from one floor to another and the corridors had a number of displays of costumes and explanations of some of the grand moments of the building’s history.

The view from the exterior balcony was marred by a lot of building work but the view was bright and sunny, so, putting opera behind us we wandered down to the river and picked up the Batobus and went for a promenade passed the Eiffel Tower and on to the Jardin des Plantes. Since the visit with my parents in 2019 I like to include the garden as part of my trips — to look at the flowers, remember fond times and eat ice cream. These things are important in life.

All done and it was the final trip back to the hotel, grab my bag and head for the Gare du Nord. Two hours later I was sitting at home.

A few days later Roman would head for Ukraine and his family — he would end up stuck there for over a year as new strains of Covid caused chaos across the globe.