I slept pretty well and was up bright and early for the buffet breakfast downstairs in the lobby. It was cloudy but warm outside as I waited on Roman to arrive. For entertainment I had one of the street cleaners hosing the street down. Never seen it done before and I was quite surprised to see the backstreets being washed as well. 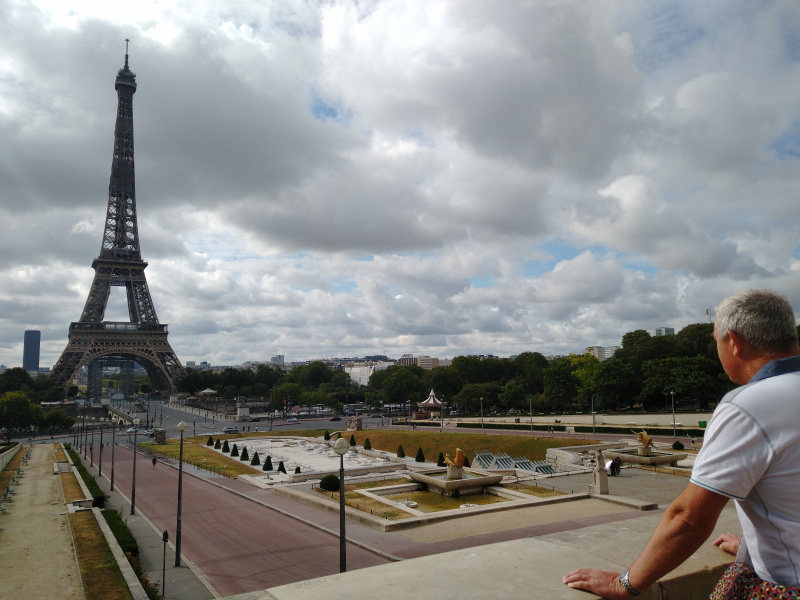 10 o’clock in the morning and the place looks deserted

Roman turned up and I made it quite clear that we were not going to walk as much today ; we had things to do and I didn’t want to waste time walking streets we had done yesterday. The Métro got us to the Palais de Chaillot from where, early in the morning, Paris seemed almost deserted. We crossed the river and walked down to the Musée du quai Branly, Jacques Chirac.

The last time I had been down in Paris, we had walked past it and even stopped for cake and drinks in the restaurant. but hadn’t had the time to visit. The collection is composed of items from Africa, Asia, Oceania and the Americas.

If I had one complaint it was that the lighting was too dim for my liking and I was being forced to resort to getting my glasses out every time I wanted to read something. As masks were as ever obligatory this was a bit of a pain as you waited for the lenses to demist.

The building was opened in 2006 (which doesn’t sound very long ago until you realise that it is now 2020) and is neatly divided up into the four global areas by a central walk way.

About half way round I realised that I had been completely ignoring arrow markings telling me which way I was supposed to be viewing everything. All to do with Covid but to be honest there were not that many people there that morning.

It was interesting to see how different civilisations had grown artistically over the years and had created their own versions of such universal items as : drums ; masks for entertainment or religious purposes ; funerary items ; cloth and adornments.

One of the sections dealt with ritual dances from the mining town of Oruro in the Andes. The dance represents the struggle between good and evil and stems from the crossing of cultures between the native beliefs and the results of the Spanish conquest and Christianisation. The items were easily the most colourful display in the entire collection.

I have travelled a wee bit so it was nice to come across something familiar and you would be hard pushed not to recognise the totem pole as coming from Canada. A lot of the African items were, on the other hand completely unknown to me and I realised that there is a hole in my understanding of African history. For example I hadn’t realised that Ghana once had an empire, part of which is now Mali.

After nearly a couple of hours of wandering around I decided that I had, had enough and went outside to sit in what sun there was. Roman was quite a while longer — I am sure that he reads absolutely everything.

Once he had decided to move on we followed the river down towards Notre Dame. It is obviously still sealed off after the fire but from the front, looking at the twin towers you would hardly realise that there had been any damage. You can’t really see much from the square, you need to be either on the far side of the river or on a boat.

Continuing our meander we came to the Monnaie de Paris. Created in 864 by Charles II, le Chauve, the bald, (as opposed to bold) it is reputed to be the oldest institution in France and the oldest commercial enterprise in the world. Well, that’s what they say !

It has never stopped functioning regardless of who was in power and through war, peace and even occupation. The number of (Royal) Mints has gone up and down over the centuries but by the 20th century Paris was all that remained. In 1958 Charles de Gaulle decided that the current building (built by Louis XV in 1775) was too small to be able to increase its capacity in striking enough coins to meet modern demands. Thus ordinary coins were moved to a new Mint in the Gironde at Pessac whilst Paris continues to create all the artistic stuff such as special editions and collectors’ items.

The Mint at Pessac doesn’t just make coins for France, amongst its clients are Thailand, Bangladesh and Lebanon.

Now the history of coins and how they are made is all very interesting but they aren’t really photogenic, especially behind glass plates. In one of the halls there was a lady working on a coin which was really fascinating and I didn’t have the courage to take a photo of her at work because it was all so delicate I imagined the flash startling her and, like the monks of yore finding herself having to throw that one away and starting again — as I was led away in chains.

So no photos then, but if you ever get the chance to visit you should do so.

Our evening finished in a Thai restaurant followed by a bar which was doing an offer on Brooklyn IPA. I think it was gone one in the morning by the time I got back to the hotel and it was pouring with rain. Fingers crossed for tomorrow, because we were off to the opera.