Boulogne sur Mer is France’s largest and busiest fishing port. It is not really a surprise then that it has an aquarium, what is a surprise is that from its conception back in the seventies Nausicaá was created as a research and educational centre. It exists as much to explain to the young (and not so young) the problems faced by the planet’s oceans as to act as a tourist magnet. 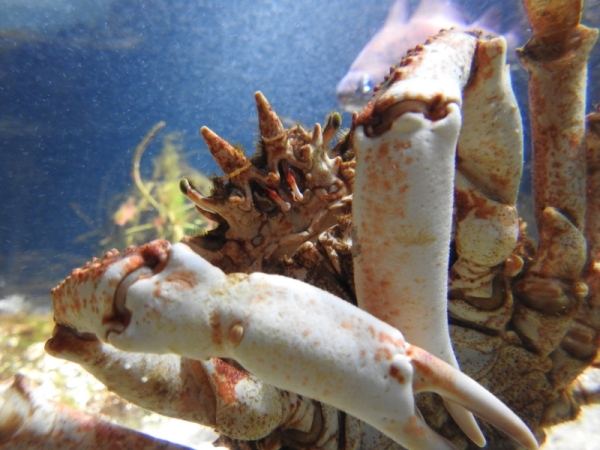 It is a place that I have visited from time to time, but despite being in Boulogne on a frequent basis I had never thought of taking out an annual subscription. Then came the creation, in 2018, of a new extension. I’d watched the works take place over the months, as the entire area along the sea front was altered. In May 2018 I went along to the opening of the new improved Nausicaá and chatting to friends from the town pushed me to take out the subscription rather than just pay the one visit.

The centre suggests that you could spend four hours on the site if you did everything, and an average of two and a half if you miss out on some of the media presentations. That is a long time for one place — looking at fish. But, and it is a big but the new basin is enormous and you are so taken in that you forget the technical genius that has created it. 100 sq m of glass, weighing fifty-four tonnes, provide a view onto the 60×35×8 metre basin (which took a month and a half to fill with 10,000 cubic metres of water). You can stand in front of it or sit on the banks to really take it in. 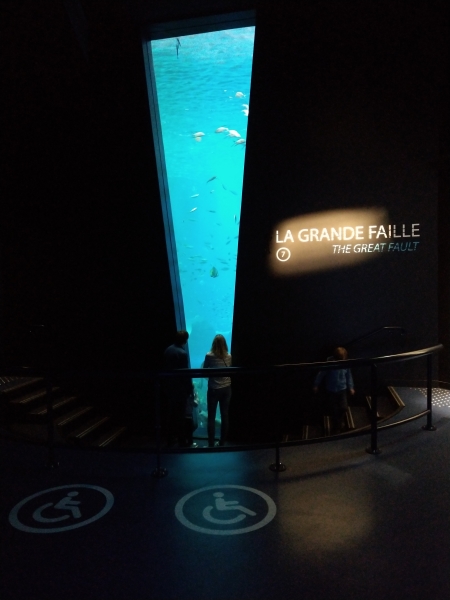 The Great Fault window onto the sea

There are lots of great exhibits to see at Nausicaá, from tropical fish to coral and crabs, via the caiman in the tropical forest. You can watch the sea lions swim under you and get sea sick on the decks of a trawler as it crashes through the waves out at sea. The Cape penguins are fun and you really notice the difference in temperature. But at the end of the visit it is a marvel to be able to sit and watch the ballet of fish and sharks in this view into the ocean.

I’ve found myself sitting quite happily here for half an hour just watching the fish, whole shoals of them. The rays are cute but the giant manta ray, for me, takes pride of place. She glides in like an aquatic Concorde, all hydrodynamics. Hypnotising !

The centre is well organised and there are lifts available, though much of the movement is done by escalator. There are bars and refreshment areas (though pricey) for a sit down as well as numerous areas for you to be able to just sit and watch the fish — or the backs of hordes of school childer. 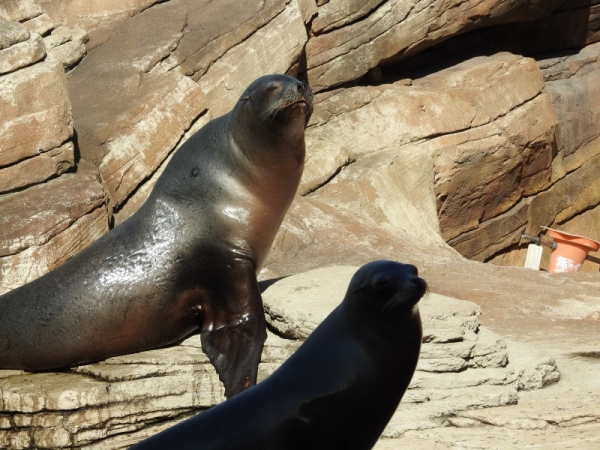 We got a day when it wasn’t too busy and just managed to catch the sea lions going through their paces as they glide in and out of the water and get their teeth brushed by the staff.

The one thing that I have found is that using my portable phone to take photos of the tanks works better than my SLR camera. You can get your phone flat against the glass and the lens isn’t constantly rotating in and out as it tries to focus.

Now this is a fish tank