Now you can’t just sit around and do nothing all the time and despite having had some longish trips they hadn’t amounted to much more than constant runs up and down the coast. What we needed was a day trip for them to see something new.

We left early in the morning and headed for Arras which is a frequent location for me and didn’t stir any suspicions until I parked at the Gare SNCF and took them up onto the platform. We were off to Paris for the day. It is only fifty minutes by TGV from Arras and we had 1st Class tickets — which, as are all over sixty, I got at a good price, 150€ there and back for the three of us.

There is wi-fi aboard and I have always enjoyed watching the train rattle down the track. The app beeps at you every time the train passes the 300 kph speed mark.

My trips last year with Roman had put a few ideas into my head about things we could do without imposing too much walking on my mother. I did warn her though that the Métro is far from handicap friendly, as it is invariably nothing but stairs. We would take our time and get to our destination, as and when.

The TGV had us in Paris at midday and, having picked up a carnet of Métro tickets we set off for the banks of the Seine and the Esplanade des Invalides. A short walk from there and we were in the Rodin Museum. There was a bit of a queue but nothing terrible and I had already equipped myself with a new, small back pack as that is all that they allow inside (it had cost me a whole 9,99€ from Decathlon).

It was getting a bit late for lunch but there is a café within the gardens and, as I said, you either paid the hefty price or we would have to walk forever to find somewhere. It was convenient, expensive, but good quality. 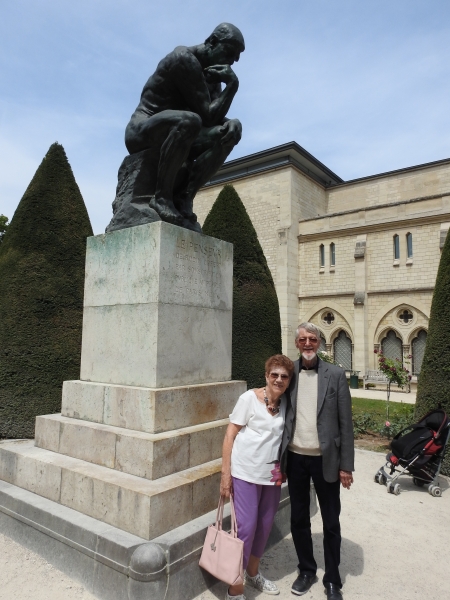 Thoughtful people with the Thinker

I’m not a seriously arty person but Rodin was one of those artists whose work is now known across the globe. The gardens surrounding the house are very pretty and the centre piece is undoubtedly the thinker at full scale. Rodin made a few so you can see copies elsewhere in the world as well as smaller models. The figure seated at the top of his Gates of Hell is a mini-thinker.

Alongside the Thinker is Balzac, the writer, draped in nothing more than a dressing gown.

Opposite the house entrance are the Burghers of Calais. This is a copy because the original, commissioned by the town in 1884, is outside the Hôtel de Ville in Calais and depicts the councillors in chains before the English Edward I. Something I noted is that for some reason Rodin gave them enormous feet which strikes me as odd for a time when people tended to be much smaller than today. Give them a look sometime !

Following his victory at Crécy, in 1346, Edward III of England laid siege to the town of Calais. The French failed to relieve the town and the siege dragged on for eleven months. In the end the town was famished and Edward fed up so he agreed to spare the town on the condition that six of the town’s burghers, tied by ropes, should bring him the keys. On the intervention of his wife, Phillipa of Hainaut, Edwards spared their lives. Calais became English on 3 August 1347 and remained so until 6 January 1558 when Henri II took it, after an eight day siege, from Mary Tudor (wife of Philip II of Spain). When Elisabeth I became queen of England, later that year, she found herself forced by circumstances to leave the town in French hands. By the Treaty of Cateau-Cambresis the French paid her 500,000 écus for the town. 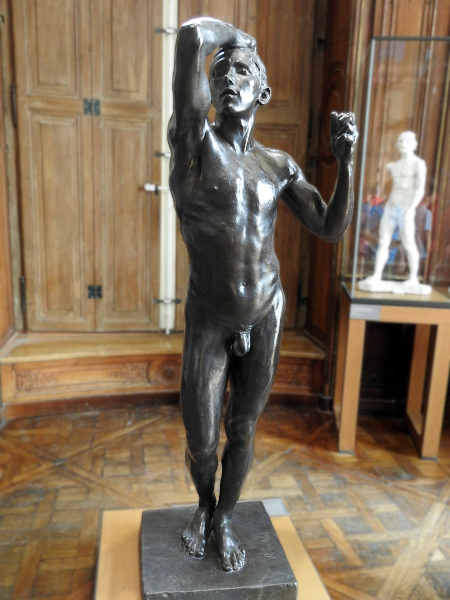 Rodin was accused of putting his model in a plaster cast

Inside the house, which Rodin used for much of his life, are models and maquettes of various works sometimes with different versions as he worked his ideas out. With the soaring temperature outside many of the windows were open and although it was still warm air, to have a slight breeze was most welcome.

The statue known as the Age of Bronze was created in Brussel in 1877 with Rodin using a Belgian soldier, Auguste Ney as his model. The original idea was for the figure to be holding a spear in his left hand but in the end Rodin decided to leave the arm free. When he showed the finished statue in Paris, Rodin was accused of having used a life cast of Ney and he had to go to great lengths to prove that no such trickery had taken place. Ultimately, all publicity is good and Rodin was given the commission for the Gates of Hell in 1880.

The Kiss is yet another piece known across the globe. Although not actually named Rodin based his theme on Paolo and Francesca from Dante’s inferno who were murdered by her husband as they exchanged their first kiss.

It became really hot within the house and the staff were beginning to wilt, as were we. It was nice to get back out into the fresh air and continue wandering the lower ends of the garden where we found Victor Hugo sprawled on his seat. We rested a bit longer by the pond before exiting back onto the esplanade and making our way across the river to the Batobus stop. This is a river taxi that allows you to get on and off at will throughout the day for a fixed fee.

We weren’t really going to use it as such as I was only thinking of making the one journey — perhaps two if time permitted. What it did allow us to do was sit in the sunshine as other tourists came and went at the various stops as we sailed past the Louvre and Eiffel Tower.

A major motivation to taking the boat was not just the pleasure of the cruise but that it also offered a view of Notre Dame de Paris following the devastating fire of 15th April. From the river you get a close up perspective of the scaffolding surrounding what is left of the cathedral.

After a good hour or so of meandering along the river we alighted at the Jardin des Plantes. It was a bit of a walk from the quay and across the road but there were kiosks just inside the gates where we stopped for a quick drink. We weren’t going to have a lot of time and it was really hot but there are plenty of benches in the shade of the alleys.

Dad made the mistake of walking on the lawn to look at something which brought instant whistling from one of the park’s guards. In France you are rarely allowed to walk on lawns. I was a bit disappointed because, with the recent bout of really hot weather, the plants were not at their best, despite the sprinklers that we had to dodge around.

Our mission though was to reach the far end where there is a really good ice cream stand. Dozens of flavours and two scoops is all you need. The return walk was made along the shade of the trees as we eat our way through our cornets. It was time to think about heading back to the Gare du Nord, so whilst we had a final sit I checked the map and the route options. My reckoning was that taking the Métro from the Gare d’Austerlitz not far from the park was our best bet.

Sadly for mum it turned out to be one of those never ending up and down stations where you have to go down and under or up and over the various lines. Life could have been easier, but she managed and we had the best laugh of the day as dad faltered a wee bit coming up one of the staircases. We had reached the top but he stopped for a wee pause. A young couple came up the stairs behind him and asked if he was alright. “Oh him”, we laughed, “nothing wrong with him, just looking sympathy !”

It wasn’t long before we were back on the TGV as it whisked us back to the north. Dad was horrified to look down at his shoes and discover they were all but beige from the gravel dust of the parks. Out came tissues to give them a wipe. Another hour and we were back at the house.

I prepared a very quick Thai chicken-basil in the time it took to get changed and cook the rice. I love simple food.