There is a strong connection between the family and the Royal Air Force. My father joined as a boy, I was a cadet and my two brothers went on to serve in it. Anton met his wife who was also serving at the time — at RAF Uxbridge (long since gone) where we had lived for the last few years of my father’s service. For many years it was the place I had lived in the longest and unlike my primary school days through our long stay there I only attended the one secondary school.

Decades later when I moved to France I found myself living not too far from where the Royal Flying Corps set up its first major base on the outbreak of the Great War. Saint Omer was, for a long time, home to the RFC and some RAF Squadrons carry its cross on their crests. Many of those early squadrons were formed at Saint Omer and when 26 Squadron was wound up its colours were (as tradition requires) laid up in the cathedral, where they are still on display.

There were numerous RFC aerodromes around where I live and some of the British aces who became casualties lie buried in cemeteries not so far away. When the Second World War brought fighting back to France the RAF set up airfields within a few minutes drive of my house and these were soon to be taken over by the Luftwaffe — who happily installed themselves in my village, the officers living in the château.

Thus I felt it was important to attend the 100th Anniversary commemorations in London. The actual anniversary was the 1st April but the decision was made to hold the events in July when the weather would be more clement and allow a fly past.

My parents had gone up to see the static display on Horseguards and they had been a bit disappointed with what was on show. One of the airmen did however allow my father onto the Dakota — on the pretext that he was a veteran and had been a Dakota Mechanic during the Berlin Airlift.

Like myself I think he has moved on in life and doesn’t have hankerings for the Service. Even so, faced with part of your heritage, you still regain a few of the vibes.

The day before the fly past we took some seats out to Runnymede and sat in the sunshine on the banks of the Thames. When I was a boy we used to come here and we’d play football or fish a little further along the river. All those memories are in black and white or shaky 8mm film.

It was cooking. Both sides of the Channel had been subjected to extreme heat for quite a period of time and grass and lawns were looking pale and limp.

Having watched the ducks and swans and the bigger birds from Heathrow fly overhead we went for a walk. Spent a few moments at the American Bar Association memorial to Magna Carta from where I spotted a weird looking roundhouse in a field. This turned out to be Mark Wallinger’s Writ in Water.

The building is made from rammed earth bricks created from the local soil and all the measurements are in cubits a measurement that really takes you back a few centuries. Long before metric was adopted the cubit was the distance from your elbow to the tip of your middle finger — so about six palms ! This is now calculated to be about 46 cm, but there are needless to say numerous versions according to whom the official elbow belonged to.

On entering the structure you can go either left or right to reach the inner chamber where you will find a pool, open to the sky.

The name Writ in Water comes from the inscription on John Keats’ gravestone, which reads :
“Here lies one whose name was writ in water”. 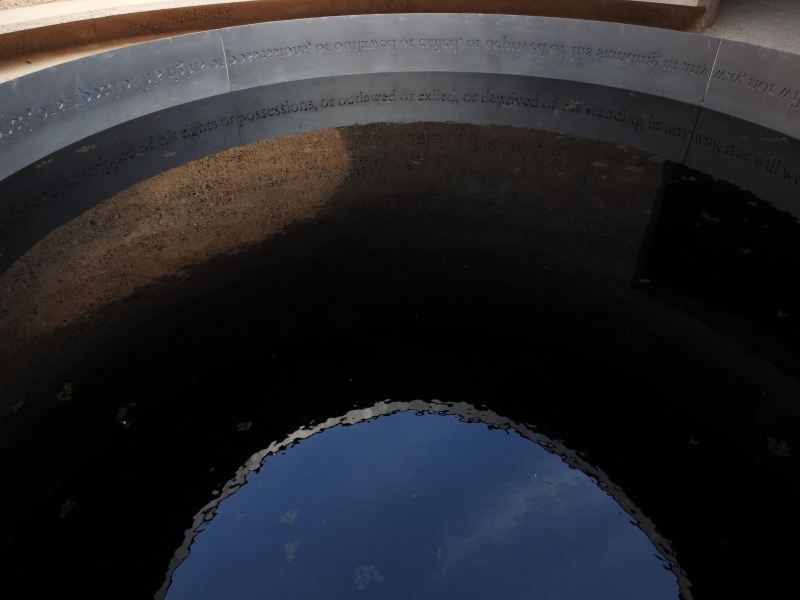 …stripped of his rights or possessions, or outlawed or exiled, or deprived of his standing in any way…

The edge of the pool carries the reversed and inverted lettering of Clause 39 of Magna Carta which can be read by moving around the pool and reading the words in the reflection of the water.

No free man shall be seized or imprisoned, or stripped of his rights or possessions, or outlawed or exiled, or deprived of his standing in any way, nor will we proceed with force against him, or send others to do so, except by the lawful judgment of his equals or by the law of the land.

Following the death of Richard I (The lionheart) his brother John was crowned King in England, however, in his possessions in France the lords their favoured Arthur the Duc de Bretagne (who was the son of one of John’s elder brothers — since deceased). Long story short, the French King Philippe Auguste sided with Arthur and although fortunes fluctuated the end result was that Normandie and Poitou fell to Philippe. In 1213 Pope Innocent III assembled a coalition under Holy Roman Emperor Otto IV to curtail Philippe’s expansionist enterprises. and John provided the financial support. Otto had an interest in the quarrels because Philippe supported his rival Frederick — oh and did I mention Otto was John’s nephew ?.

On 27th July 1214 at Bouvines (near Lille) Philippe crushed the coalition army. Within years Otto was deposed and Frederick (who was actually a good guy) became Emperor. Back in England John’s position became more than precarious and the barons rebelled against him, forcing him to accept their terms : the Magna Carta, which was signed at Runnymede on 15 June 1215. John was quick to have it annulled by Innocent III and war with the Barons continued until John’s death on 18 October 1216. It was reinstated by his successors and modified over the centuries.

Frederick II was the Emperor who had Charlemagne reburied in Aachen Cathedral on the first anniversary of the Battle of Bouvines.

Off to the Mall 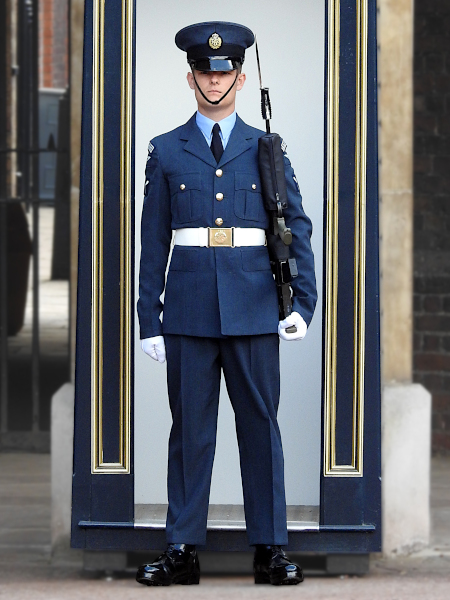 Up early and down to Slough to catch the coach into London. That dropped us off at Hyde Park where we only had to walk through to reach the Mall. There were a lot of people crowding around Buckingham Palace where the RAF were changing the guard. As I walk faster I went on ahead to see if I could get an advantageous position to take some photos.

It was difficult. The place was thronging with people all jostling to try and get a place in the centre of the Mall. No doubt that the best views and photo opportunities would be from the middle of the road but I wanted to try and get some shots involving the RAF ensign and that meant having trees in the way as well.

Well you can’t have everything so I claimed my spot and stuck to it. I had no idea where my parents had got to but presumed that they had reached somewhere they were happy with.

I am always in awe at aircraft photographers who manage to get clear close up shots of the craft as they fly past. It is not easy to get them into focus in the split second they are actually in frame. We weren’t helped by a sky that was a bit hazy. You could have fried eggs on the road surface but it wasn’t a beautiful blue sky above us.

All said and done I managed a few shots I was happy with and enjoyed the rest. “Oh look another helicopter !”

All over and done with the task moved to reuniting the three of us in the park. Either that or I had a lot of sandwiches to eat on my own. Mother seemed to have got lost but having texted to say where we were I looked at the souvenirs on sale. Frankly, I wasn’t impressed. They were either silly money or just nothing that I really needed. Oh well, never mind. Once regrouped we found a place on the grass and had ginger beer and sarnies.

Suitably refreshed and rested we went for a dander around the park and St James’s Palace. Dad got chatting with some of the passing servicemen as we made our way back through Hyde Park. It was a long, long wait for the return coach. The traffic was crazy. If this is what it is like with the Central London Pay Zone you wouldn’t want to be driving in it without one. We waited and waited some more. Then another lady joined us and she had the App on her phone. Handy little number as we now knew where the coach was.

The journey out of London turned out to be as interminable as the wait. The Chiswick flyover was solid and at a standstill and it took us an hour or so just to get over it. After that though the traffic began to clear and we picked up speed.

Glad we did the trip though.