None of us had any recollection of having visited the cathedral and once inside you quickly realise that you would have remembered.

I had to pay a small sum towards the cathedral upkeep to be allowed to use the camera inside but it was more than worth it and it is all towards a good cause. Once we had visited the cathedral we popped next door to see the treasury as well. The artefacts within go back more than a thousand years.

Perhaps the most famous piece is the Karlsbüste, a 14th century likeness of Charlemagne that contains his skullcap (which was removed from the shrine). Other reliquaries contain more bits of him — not sure I agree about all this taking bits off the skeleton.

Back to the cathedral. If you want to see all of it you have to take a guided tour as certain sections are closed off to general wandering about. We just wandered, sat, wandered some more and that was more than good enough for us. There has been restoration work carried out and it really shows. It was all so clean and bright, not a dowdy white column to be had.

The interior is quite stunning. 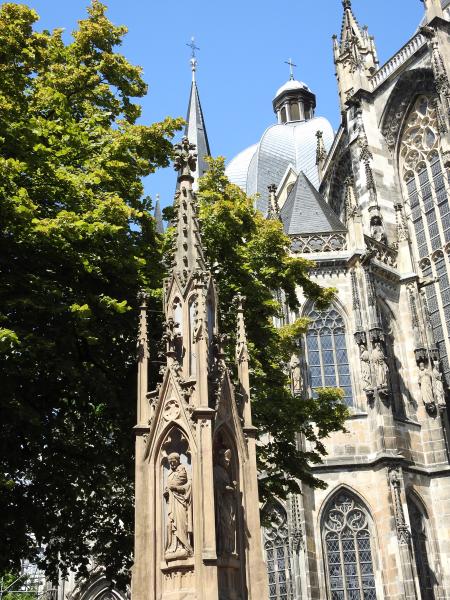 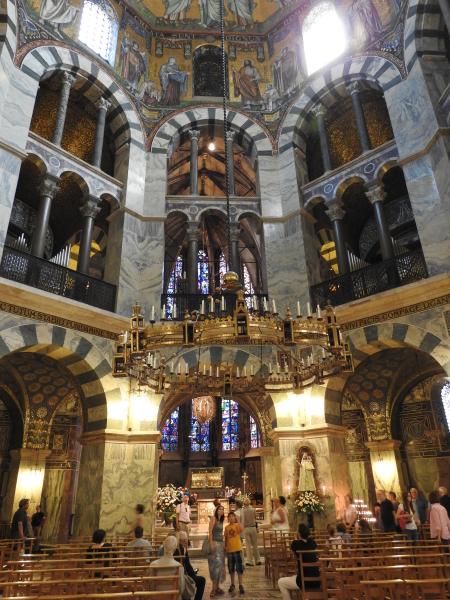 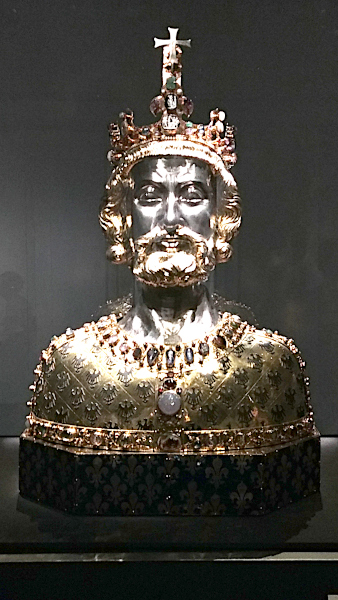 It could be argued that Charlemagne didn’t have a great start to life, being the son of Pepin the Short and his wife Bertha Broadfoot. Pepin did have one thing going for him though, he was king of the Franks.

Born, Charles (Karl), sometime around 742 he was the eldest son and possibly, a sort of, illegitimate one as well. Whether or not he was born in Aachen itself is up for debate but the Carolingian family certainly hailed from the general area.

When Pepin died at Paris in 768 the crown passed jointly to his two sons Charles and Carloman.

Charles was crowned in Noyon cathedral ; his brother at Soissons, and between them governed far more than modern day France with holdings stretching into Germany, Belgium and the Netherlands — to give them their modern names.

The two brothers nearly got on and historical accounts assure us that Carloman did die of natural causes in 771.

For the rest of his life Charles was pretty much at war with somebody or other as he brought Lombardy, Bavaria and part of modern Romania into his realm. The Saxons were defeated along with the Frisians along the northern coast creating this massive central block stretching all the way to Moorish Spain.

Now it just so happened that Charles’s da, Pepin, had been a great supporter of the papacy and had donated and then enforced the Pope’s right to govern a lot of land around Rome — much more than the Vatican of today.

In 772, following the death of Carloman, Charles claimed his brother’s lands for himself which greatly upset a rival in the form of Desiderius, King of Lombardy (and Charles’s ex-father-in-law), who called on Pope Adrian I, to make Carloman’s son, King of the Franks.

Adrian hedged his bets, sided with Charles and called on him for help when the Lombards invaded the Papal territories. 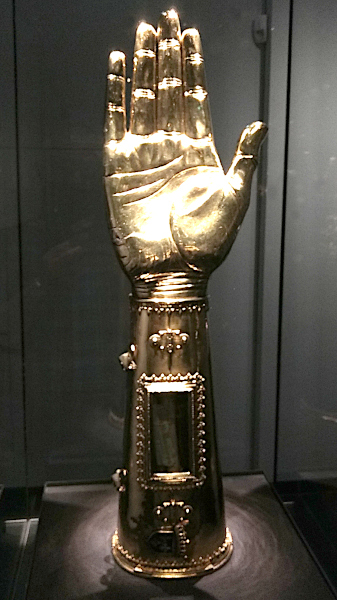 Charles arrived with an army, defeated Desiderius and had him banished to Corbie Abbey on the Somme. He also confirmed the Papal rights to the land his father had donated. Adrian died in 795 and Leo III was elected within days.

In 799 Pope Leo found himself attacked by armed men, in the pay of his rivals, and was forced to flee to Charles. Charles then escorted Leo back to Rome and presided over a tribunal. Accused of adultery and perjury the Pope made a formal oath of purgation to Charles in Rome on 23rd December 800 — there is a famous painting of this scene by Raphael in the Vatican.

No real surprise then that on Christmas day 800, the politically weakened Leo, unexpectedly crowned Charles Emperor. The message was clear : the Pope decided who would be the Holy Roman Emperor, however, Leo knew full rightly that he only had that power because of the Frankish king.

And so Charles became Charles the Great ; Charles Magnus ; Charlemagne.

Apart from bringing Christianity to lots of people (by killing them if they refused) he was responsible for many things that came to unite Europe.

Not having a great deal of access to gold Charlemagne changed the money system to a pound of silver (livre) which was made up of twenty sous which in turn were made up of twelve deniers (from denarius) thus creating £/s/d. Along with that he introduced a proper accounting procedure.

Charlemagne loved books and believed that a good education was important. He encouraged clerics to translate religious prayers into the local dialects. It wasn’t all just about religion, however, and he supported the flourishing of books on history, art and music. There were so many copies of everything being made that there is a wealth of evidence still available today of his work in promoting libraries. All the more amazing when you remember that everything had to be copied by hand.

On that subject Charlemagne even hastened new ways of actually writing which included the use of miniscule letters as opposed to constantly SHOUTING in all CAPS.

Charlemagne set up a system of division for the future inheritance of his realm. Everything would be split between his sons in the traditional manner of the Franks. By the time of his own death in 814 only one legitimate son remained alive : Louis (the pious) whom Charlemagne had crowned co-Emperor the year before. The Carolingian empire remained intact until Louis’ death in 840 when it would be divided up and slowly give rise to modern day France and Germany.

Perhaps, because of its healing spring waters, Aachen was chosen by Charlemagne as his home. The royal court grew and in 796 he ordered the construction of a chapel to adjoin the royal residence of the Palatine capital. It was finished just in time for his death (in 814) and he was buried within it the following day. 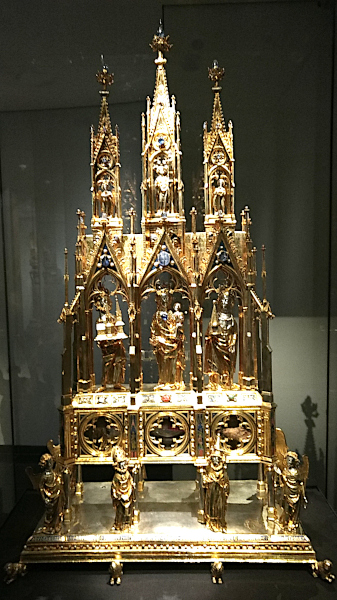 The construction was inspired by eastern churches and has at its core an octagonal form. It is surrounded by an aisle and topped with a dome. Facing the altar was a simple, slabbed marble throne from where the Emperor could look down upon the congregation and proceedings. The seat was used as a coronation throne for thirty-one German kings from the middle ages through until 1531.

For centuries the building was the most imposing church west of the Alps and following Charlemagne’s canonisation by Frederick Barbarossa in 1165, the chapel became an increasingly important destination for pilgrims coming to venerate not just him but also the holy relics contained in a golden shrine — which are still shown to the faithful every seven years.

Barbarossa donated the golden, wheel chandelier which hangs from a thirty-seven metre chain above the congregation.

Sometime between 1355 and 1414 the chapel was increased in size and the Gothic choir was created. It is illuminated by over a thousand square metres of glass windows. These were destroyed during the Second World War but were replaced in its aftermath.

Everywhere is mosaic, some thirty-two million pieces reaching right up into the domes. The altar is decorated with the Pala d’Oro which was created by different artists in the 11th Century. It shows Christ in the centre with depictions of his life around the edges.

Behind it are the two sacred shrines. The first is the Marienschrein dedicated to the Virgin Mary and contains four relics amongst which is the decapitation cloth of St John the Baptist. It dates from about 1230 and shows : Christ, Mary, Charlemagne and Pope Leo III alongside the twelve Apostles.

Behind it, in another casket, lie the remains of Charlemagne himself. It was completed in Aachen in 1215 on the orders of Emperor Frederick II. Charlemagne’s body had already been moved into a vault by Barbarossa and now on 27th July 1215 Frederick II personally supervised the transfer to the casket. The oak box is decorated in gold and is just over two metres long. Scrutiny of the bones suggest that Charlemagne was somewhere between 1.88m and 1.94m tall — well above the average for his era.

As an aside from all of that, Frederick II had chosen the first anniversary of the Battle of Bouvines because that had resulted in his promotion to Holy Roman Emperor. Not, you might think, because he was on the winning side. Au contraire, the soon to be deposed Emperor Otto IV had sided with King John (lackland) of England and the Flemish against King Philippe Auguste of France. They were soundly beaten and John was forced to renounce his possessions in Anjou. He returned to England so politically weakened that he would be confronted by the Barons and their Magna Carta less than a year after his defeat. 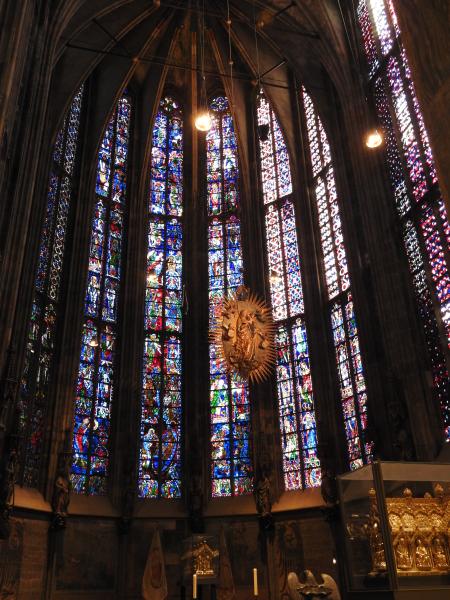 Charlemagne’s casket in the background