Anybody seen a nut bowl ? 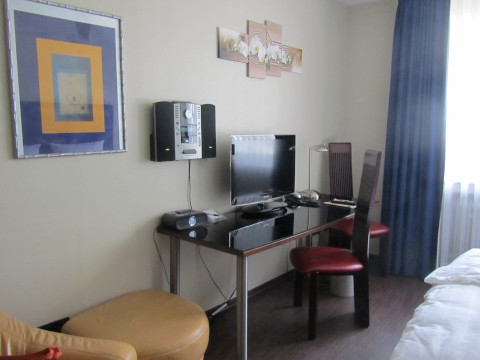 We got a comfortable night’s rest and the following morning we crammed into my parents room for breakfast. We had just about enough left over from yesterday’s lunch to make something up and I had packed cornflakes, milk and tea bags to cover all eventualities. The kitchenette was nothing brilliant but it had everything we needed.

The day promised to be glorious so we were able to dress for sunshine and head off on a voyage of nostalgia.

When I was a wee lad we had come to Aachen on a day trip, probably from Belgium, using the Inter-Rail pass. I don’t think we have any photographs and to be honest I have no recollection of having visited the cathedral — perhaps we didn’t. We may well have been far more intent on getting something to eat and perhaps visiting the zoo.

There is, however, one over-riding memory ; that of a squirrel nut bowl. We had been wandering about looking in shops when my father eyed a wooden nut bowl with a squirrel looking in. The price looked reasonable so we entered the shop for him to have a better look. The assistant couldn’t reach it so had to take off her shoes and tiptoe through all the glassware and porcelain to retrieve the desired bowl.

It was lovely and would have looked good on the dining table, its only drawback was that the price wasn’t in hundreds of Marks it was in thousands. I am sure there were a few polite coughs before my father said that it was very nice but a solid silver squirrel wasn’t quite what he was after.

No idea where the shop was but we did keep our ears alert for, now, elderly sales assistants running into the street screaming : “It’s him ! The squirrel nut bowl”.

The centre and Elisenbrunnen fountain

Although finding our apartment had been tricky — and heaven know how we were going to get out of the city tomorrow — it was within a few minutes walk of the historic centre of town. Descending Peterstraße brought us to one of the major symbols of the city : the Elisenbrunnen fountain. From way back in Roman times the town has been known as a health spa with its hot water springs, Charlemagne is said to have moved here because of the healing nature of the water.

In 1827 a twin rotunda and fountains was created to symbolise the local springs with water pumped up from the Kaiserquelle. It was destroyed during the Second World War so what you see today is a copy built in 1953. There are marble plaques on its walls listing some of the famous people to have visited the pump-house. 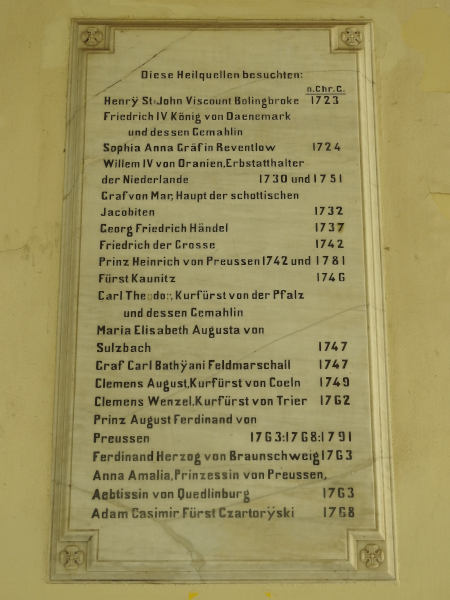 There are signs warning you that the water coming out of the fountain isn’t warm, it is hot at 53°C.

In the good old days you could just drink the water directly from the fountains, after all Sulphurous water is supposedly good for you. That is if you can get over the smell of rotting eggs (reminds me of Rotorua in New Zealand).

Medical advice these days is more on the : I wouldn’t go drinking that stuff unless you are under medical supervision.

Just behind the fountain is the small Elisengarten park where, once you have got bored with sitting on the lawn in the sunshine, you can visit a small pavilion which looks down on various layers of the town’s archaeological history. Behind that is a modern fountain, the Kreislauf des Geldes (the money-go-round).

Created in 1976 by Karl-Henning Seemann the characters surrounding the swirling fountain beg, borrow and steal from each other as the money, like the water, goes round and around.

You can tell he is counting every single calorie

But my, look at the time. It’s midday and we haven’t stopped for coffee and buns — a must do ritual on all Continental holidays. And, there, smack on the corner was a very tempting looking Bäckerei und Cafe.

Suitably refreshed we made our way to the cathedral and then its treasury, which I’ll cover on the next page.

Part 5, Charlemagne and the Cathedral

Just behind the cathedral is the City Hall (Rathaus) and the market place. Mum looked at all the flowers and various pots, wondering how she could get them back to England. In front of the City Hall is a statue to Charlemagne but unfortunately because the front of the building was being renovated the complete view was ruined by scaffolding and boards announcing who was paying for what and how long it would take. The sun wasn’t helping either at that moment of the day.

The trip down memory lane

Now you can’t do everything in a single day and especially so as you get older. At fifty you think you are doing great ; by the time you reach sixty you realise that sixteen hour shifts are not as fun as they used to be and although the folks are doing well they are in their eighties.

Another wee sit by the money-go-round and we set out for the one thing I really wanted to do, visit the Hauptbahnhof. I have no recollection as to what it looked like but it was the one place that we all knew that we must have visited. Isn’t life brilliant with GPS on mobile phones  You just tap it in and follow the wee arrows.

It is a bit out in the back streets and we did look for boutiques selling nut bowls but never spotted one. Fifteen minutes later we were at the railway station. The exterior was little affected by the war because the railway connections (from neighbouring Belgium and the Netherlands) were considered important by the Allies. At the turn of this century the insides were given a make over and the result is quite a modern affair. Even if we had, had memories there was little sign of days gone by.

But, the important thing was that we had made our pilgrimage and we had more tales to tell. Further drinks were had on the way down the hill and we then went looking for souvenirs. I was tempted to buy a beer stein but we just didn’t see anything. Perhaps we were just in the wrong place but, to be honest, there seemed to be a lack of things : “I found this in Aachen”.

We had done enough for one day and apart from picking up breakfast pastries on the way up the road we retired to our apartment for a couple of hours rest before setting out for dinner again.

Nice place, just no clients ‘cept us and the Chinese

This time I suggested that we go for something German so a quick look on Tripadvisor gave some hints and off we set. More or less back to the centre and around the corner. Except, that I couldn’t see the place I was looking for due to the mass of scaffolding obscuring the entrance. In we went to find the Aachener Brauhaus all but empty. I forget the reason but they were having to close early at 2100 hours, but, if we wanted just a main course that could be provided. Rather than wander any more we said yes.

I generally find German beer too weak, and too bland, for my liking and as it only seems to come in two sizes : get up twice / stay up all night, I hadn’t been drinking a great deal of it. However, the one the barman proposed was a local one and had some taste to it.

The food was good but it was weird to be sitting in this German pub, with only a table of Chinese business people for company. We weren’t rushed and I think that the Chinese stayed long after the place was supposedly shutting because their wallets suggested they were in ‘til the finish.

A full day’s walking and so far no pudden. That could put the mockers on the best of holidays. Outside it was remarkably warm for nearly ten o’clock and so we went for a last wander around the cathedral area looking at the boutiques selling 4711 Eau de Cologne and the statue of puppets whose legs and arms move. As we reached the Elisenbrunnen Park we could see that there were places available outside the Eiscafé Elisenbrunnen (which is actually an Italian ice cream parlour) with lots of people tucking into ice cream sundaes. Looked like a winner. 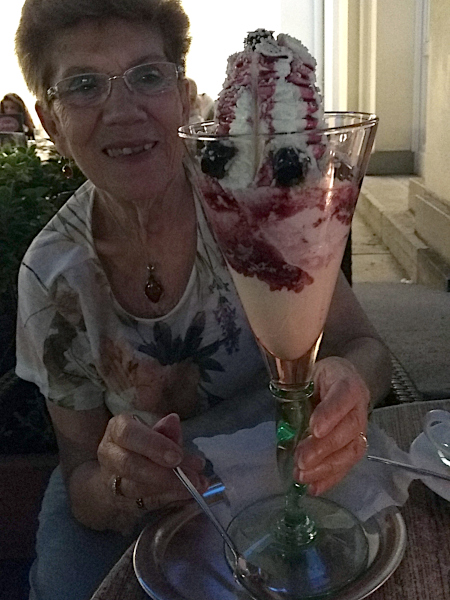 We looked at the menu and reckoned that this strawberry and cherry concoction looked good. I ordered two and thankfully the waiter misunderstood me and only brought one. It was enormous but my mother did us proud by finishing it (with a bit of help from me — there was no way I could have eaten a whole one).

For so late at night we were fascinated by the bendy-buses arriving at the bus stop with hordes of people getting off and heading away with friends. There was so much life. The countryside is great but from time to time it is good to have other people about.