This afternoon we were going on a train ride. After a somewhat miserable day yesterday I was really hoping for a bit of sunshine because sitting in open carriages going around the Bay of the Somme is not funny in the wet.

No matter, it all turned out lovely. There are three main stations along the line and the middle one is pretty convenient for where I live. You then have the choice of heading to Le Crotoy on the northern side of the bay or Saint Valery on the southern side. To be honest there is not much to see on the northern sector as you are mostly just inland and you don’t get to see anything other than vegetation.

Towards Saint Valery though, there are fields with highland cattle, the famous flocks of sheep grazing on the salt marshes and some nice views of ponds and the bay itself. The arrival into Saint Valery is also more interesting. 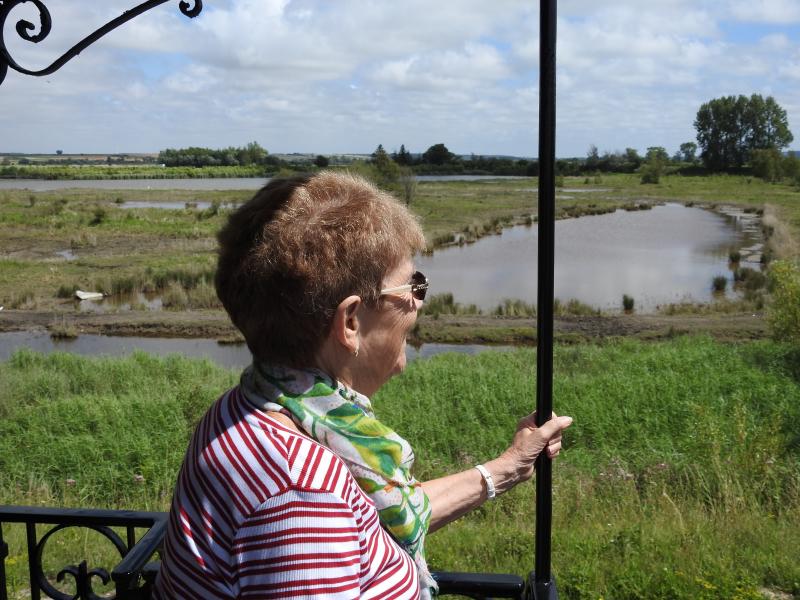 Saint Valery is a really old town and was a thriving fishing port for centuries as well as a trade centre for the English — hardly surprising considering that William the Bastard set sail from here in 1066 to become the Conqueror.

There is a market that runs alongside the pebbled beach and we stopped to buy some nougat. From there you climb up into the old town where there are traces of the old fortifications as well as the obligatory (around here) plaque announcing : Joan of Arc was here. There’s one at Le Crotoy as well, as she did quite the tour on her way to Rouen.

The tide was out and we could see right across the bay to Le Crotoy. 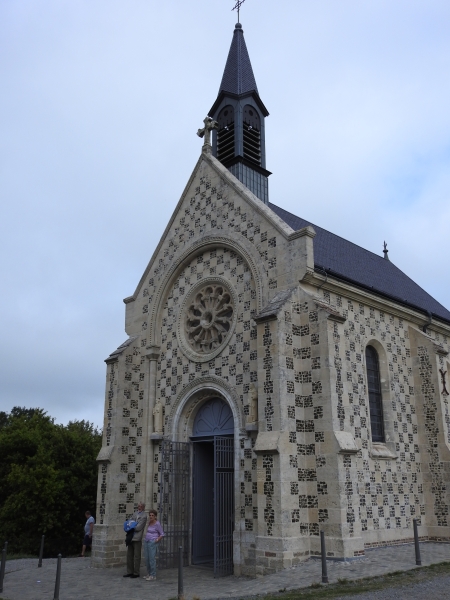 High on the hill above Saint Valery is the sailors’ chapel. We had been up there years before, in winter, when it had been closed and I was hoping that the walk would not be wasted, and that we would find it open.

The town is named after Saint Valery (a modernisation of his name Gualaric/Walaric — which explains why there is not the usual accent on the name) and the chapel is by tradition situated on the site of his original burial. It eventually became an element in the abbey which would be destroyed during the Revolution. With the departure of the monks it was left to the local fisherfolk to maintain the chapel and so it became implicitly connected to their trade.

The chapel slowly fell into a dilapidated state and a public subscription was started to replace it. The current chapel dates from about 1878 and, to the annoyance of some in the community at that time, was created in the Gothic style, though it does retain the regional styled chequerboard walls, created with alternate blocks of chalk and flint.

Traditionally surrounded by trees (the site was a sylvan religious site in Roman times) the elms had to be cut down due to disease and they have never been replaced. With the slow disappearance of the local fishing community the chapel once again fell into disrepair but was saved by the townspeople organising a restoration fund. Since 2014 it has been reopened in its new found glory.

Our day finished a little further up the coast at my local beach of Quend les Plages where we managed a dander along the sand before heading for pizza.