I had gone over to England on the 13th to collect my Parents for a short holiday and we had attended the firework display above the beach at Boulogne the following evening. We had been looking forward to ‘something and frites’ but the queues were lengthy and by the time we were halfway to the front of one, the patron announced : “plus de frites !”. How can you run out of frites on the national holiday ?

No matter we managed to survive on a batch of Irish flakemeal biscuits I had baked, and we walked back up to the beach to find a place on a bench. The wait for the fireworks is always worth it.

Although the dispersal of the massed crowd had been very orderly it had still been coming on midnight by the time we reached the house again. Dad went to bed and mum and I sat up for a moment for a chicken sandwich and a glass of whiskey ; a wee something to tide us over until breakfast .

There was no great rush for the following day.

Looking down on the port from Napoleon’s billet

Every couple of years Boulogne sur Mer holds a sea festival where you can learn how to catch fish, filet fish and even cook fish.

Sadly the day was not fabulous and for July the temperature left a lot to be desired. It was dry but overcast, and whilst that didn’t dampen our spirits it didn’t make for great photographs.

You don’t have to be too nautical to be amused for an afternoon and you certainly get a decent amount of exercise whilst walking around the harbour. There were boats to be visited, dancers and singers to be watched and listened to and plenty to eat.

Probably the warmest location we came across all afternoon was next to the spit-roast at the back of one of the eateries — that was putting out some heat. 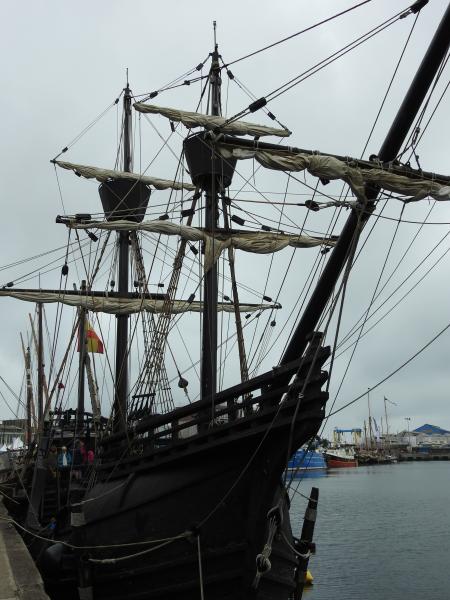 One of the boats we did go on was a replica of the “Nao Victoria” that had been built in Spain in 1991. It commemorates the only ship from Ferdinand Magellan’s fleet that returned to Spain after circumnavigating the globe in 1519-22. The four other ships were lost on the voyage and Magellan himself died in the Philippines in 1521. Having failing to convince one of the native leaders that Christianity was a good thing he led an armed party against the recalcitrant chief but was himself killed ; his body was kept as a war trophy despite a hefty sum being offered for its return.

Of the 270 sailors that set out with Magellan, less than twenty survived the journey. Considering the crew of the Nao Victoria was supposed to be forty-two the dangers of the voyage were clearly not for the faint-hearted. Indeed, even the captains were murdered, marooned or at best deposed.

Once aboard you realise just how tiny the boat is : less than twenty-six metres long and not even seven metres wide, she has a draft of three metres and weighs 164 tonnes. The captain had a cabin, of sorts and everybody else appears to have had the deck !

Although Magellan was Portuguese he sailed for Spain and King Carlos I — who is far better known in the north of France as Charles Quint, the Holy Roman Emperor.

A lot of the arts and crafts involve rope and carved wood from pieces washed up on the beach. On that side of the port was the Étoile du Roy a replica frigate that had been built for the TV series Hornblower. Originally launched as the Grand Turk in honour of the Chatham shipyards of Michael Turk which built such vessels at the time of Napoleon — the replica had to be built in Turkey. At forty-six metres long she is clearly much bigger that the Nao Victoria. Having spent a lot of time standing in for various warships on television the boat was bought by a French company and renamed the King’s Star. 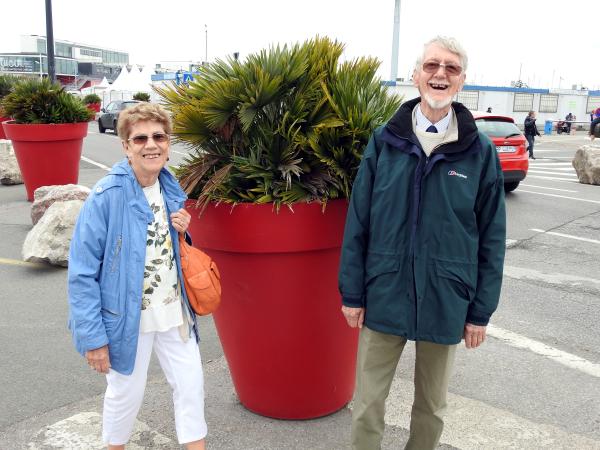 Wandering around the amusements, eateries and exhibitions we came across the two local giants, Batisse and Zabelle. Giants are a big thing in the north of France and are recognised as part of French regional culture. Both wear traditional costumes and their names come from the Picard versions of Baptiste and Isabelle. You can tell from her frown and position of her hands on her hips that she doesn’t take any tomfoolery from Batisse.

Smoked herring is very popular and we watched a lady filet fish in a matter of seconds. Like all skilled workers she made it look so easy and that knife was as sharp as a scalpel.

We were very good though and resisted the nibbles as were heading to a fish restaurant later in the evening.