All good things come to an end but we did at least have the luxury of a late flight so could take our time getting ourselves organised. I was glad that I had bought the extra allowance for two of us on the flight because I am not sure where the weight was coming from. We didn’t seem to have bought a great deal apart from bottles of drink — and that was only because you can’t get the stuff back home ; it is going to have to last years.

Outside it was pretty miserable, the rain was falling and it was hard to know just quite what to do.

The one thing that was definitely on the list was to visit the church of Sts Peter and Paul. Often driven past, never visited, but Vaidis had said that this was a place that needed to be seen. According to the map it looked a tricky one to get parked at as it was right on the roundabout. We would get there and see.

The car was loaded up, the boot on the Jetta taking all our luggage with greater ease than Alain’s Golf, I handed the apartment key back in and off we went; down the hill for the last time.

Reaching the roundabout I had to go around twice because I had made the error of thinking that roundabout rules would be the same as in France. Instead, I found that people simply accelerated around the outside lane regardless of where they intended to come off, making it difficult to move across from the inner lane.

When we did reach the car park, it was so full of coaches that we couldn’t get in anyway and had to go around again and come off the street before. We got parked under some trees and organised the brollies for it was truly chucking it down. Avoiding the puddles, manoeuvring coaches and tourists trying to get back on their buses we made it to the gates of the church.

It really doesn’t look like much from the outside but when you go through those doors your breath is taken away. Replacing its burned down precursor the church was founded by Hetman Michał Kazimierz Pac who brought Italian masters Giovanni Perti and Giovanni Galli to Vilnius to create the interior decoration of two thousand stucco sculptures. The church is considered a masterpiece of Polish-Lithuanian Commonwealth Baroque and who am I to argue. 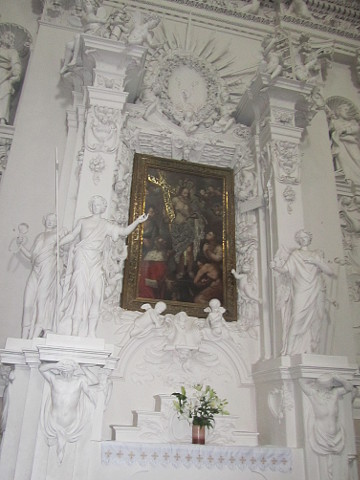 The sculptures are both biblical and mythological and I am sure that you could spend hours in there trying to take it all in. A Latvian made, boat-shaped chandelier made of brass and glass beads hangs from the middle of the dome acts as a reminder that Saint Peter was a fisherman.

My father noted that there was a machine at the front that, for €2, would switch the interior lighting on. He paid and we gained. I was intrigued, having witnessed the way the lighting brought out the relief of the sculptures, that not one of the tour group leaders had thought of coughing up the pittance for their clients.

Another wad of tourists arrived and we braved the torrential rain, leaving whilst it was quiet out front. Outside the world seemed very drab in comparison to what we had just been looking at. Nothing that can’t be cured by coffee and buns — let’s go shopping.

It was quite obvious that with the rain settled in for the day that we would not be visiting the Three Cross Hill so I settled on the small Europa shopping centre. We wandered about a bit looking at the different high-end fashion shops and I bought mother a small book on Lithuanian cuisine. The recipes all looked interesting and fairly straightforward to create.

Wandering around we had been talking about cherry chocolates and whether the shop still existed in Ieper. It does. By chance we then saw a stall that sold chocolates. The shape suggested that they might be cherry so I posed the question in English. The lady didn’t understand what I was saying and I didn’t understand the reply but decided to pick some up to try them.

I know some numbers but what is a hundred ? No idea. I did understand though that at first she thought I only wanted two (and that would never do — they might be nice. Nobody buys ‘A’ doughnut !). No I didn’t speak Polish but she did speak Russian. A hundred grams please, no, better make that six pieces. Done deal and nobody had to spit on their hands.

We chose our spot by a window and ordered coffee and buns. I had a poppy seed concoction which wasn’t quite a Makowiec like what I make but was close. Poppy seeds, worse than coconut for getting between your teeth.

Outside under the awning, sheltering from the rain was a young couple sitting at a table. He was smoking what looked like an electronic cigarette but struck me as being more of a pipe. The clouds of smoke he was putting out would not have been out of place at Paddington Station back in the sixties (I live in France so I am not allowed to use the “W” word).

She, seemed to be completely oblivious to the fact that from time to time he must have disappeared from view. Never seen the like of it, and to top it all, he then lit up a real cigarette which by comparison was positively ecology friendly before returning to his Flying Scotsman special. It kept us more than amused for half an hour.

Here it comes, our last lunch in Lithuania. Back to Užupis. The same wee cutty who had served us on Sunday was there. We immediately posed the question : do you have apple pie ? If yes, we are staying. We stayed.

We decided on salads but just to make sure, ordered the three slices of apple pie at the same time. The pie arrived first and I am sure she was well confused that we then just put them aside for after the meal. Weird foreigners. 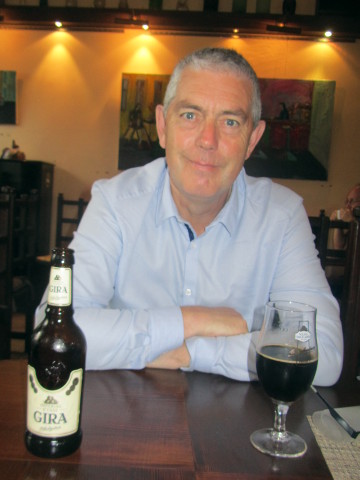 The pie was nothing like what we were expecting, and would probably be considered more of a flan by our standards. Not that we complained. It was good and lived up to expectation.

Oh well. There it is then. Time to get the car washed, fill it with fuel and head to the airport. The rental company had been very clear. I was not to use an automatic car wash. Not a problem we don’t have many in France, most of ours are manual Kärcher style stations. In England of course you drive to the local supermarket car park and ask the local Lithuanian/Polish/Slovakian guys with their buckets and cloths to valet the car.

I had researched filling stations on the map but hadn’t seen a car wash, though the guy had assured me that there was one a few kilometres short of the airport. We found a filling station and I pulled up realising as I did so that I hadn’t bothered to check which side of the car the cap was on. No matter. Then I discovered that unlike mine there was no lock to be undone to get the cap open. Fine, there will be a leaver in the car to open the hatch. Looks in car, nada. Fine. I’ll get out of the way of others and we will look it up in the handbook — which was only in Lithuanian. I understood my father suggesting that I could try looking it up but not knowing the Lithuanian for petrol cap made it difficult. The pictures of the interior suggested nothing pertinent. Finally we came across the section and…you push the hatch to open and close it. No keys, no levers you push it. Bloody Germans and their damned complicated cars !

That was fuel sorted. Now to wash it. By chance I came out of the filling station the wrong way and was forced towards the town centre. On the other side of the road was the wash station. Everybody else was doing it so at the next set of lights I threw a U-turn.

Must say, the machine gave good value for money, it would definitely have cost me more back home to clean the car. It was only on dousing it down that I realised just how filthy my white car had become. One of those cases of, it looks alright until you clean it. Washed and hoovered we set off for the airport.

I handed the car in without any inspection being carried out. “Is it necessary ?” the woman asked me. As the scratches to front and rear had already been written off the answer was “no” if she was happy enough to take it on trust.

We booked our luggage in and Ryanair didn’t get excited about the fact that one bag was slightly over limit whilst mine was well under. You hear horror stories about the firm but on this occasion they chose not to make life difficult.

We found a bench overlooking the hall and finished off our bottles of drink. For my father that meant a litre of cider. I believe that he was helped. No more Vytautas Water for me, goodbye Earth Juice.

Down below was a group of girls all dressed as though they had been to a wedding. All of them in white. A while later they were joined by the girl of the moment who was in a pink outfit. I wonder what she had done with the husband. We were on our way through to the departure gate anyway so never did find out.

Three hours later we were back in France and met by Hilary’s friend Marie-Christine who drove us home. It was the 13th July and a number of towns had obviously decided to start their Bastille Day celebrations early and we were greeted by fireworks going off alongside the autoroute as we wended our way back home.

I had been pretty much correct in reckoning that it would be midnight by the time we arrived. We had a pizza in the freezer ready and that was soon prepared with some bits to fill the gap. That apple pie had been a long time ago.