With the big day for Vytautas and Evaldas beckoning I sought out a present, organised the haircut and washed the car. She was pristine up until I got her home again, by which time the mud and tractor used roads had put paid to my finest efforts, and three tokens at the car wash. I dropped the idea of polishing it as well because straw is so difficult to get shiny looking. And where does it come from ? Is my car a straw magnet ?

But, the inside was clean and tidy after I had hoovered up all the bits of hedge and lawn out of the carpets. I might use plastic sacks to transport the garden refuse to the dump but like chocolate, hedge cuttings are insidious and cling to everything.

According to the forecast the weather was not looking fabulous so I bought a new umbrella and deliberately didn’t buy new sun glasses. The final thing that I needed to do was organise some cash for U-Bahn tickets, coffee and other incidentals.

According to the route planning, once I reached the A21 at Arras it was autoroute from there pretty much to Bonn so I needed to stop at a bank on the way. Now, to get onto the autoroute I have a number of possibilities but the simplest is via Aubigny where fuel is often cheaper than back in Hesdin and there is also a vomiting bank available in the square.

The car filled to the gunwales, I continued into the town square, which is about the size of a sixpence. All the parking spaces were taken but it was just possible to park across three other vehicles at the bank — blocking them in. Sure, I’ll only be a few seconds and standing next to the car. No worries.

Abandoned the car, ran the few metres to the machine and pushed the card in. That was weird ! It had simply slid in as opposed to being pulled in. Read the screen: Under Maintenance. They were re-filling the dispenser. Thankfully it was late enough that the branch was already open. “Bonjour. I just put my card in the machine outside without noticing it wasn’t in service. I hope that it is now lying on the floor on the other side of the wall”.

Whilst the chap goes off to search for my card I watch a lady doing a seventy-point turn trying to get around my car. I’ll just stand here and hide a bit longer.

Card recovered, money withdrawn from the machine inside the bank and I am on my way.

A few days before I had had a wee scare in the form of the German Green Zones. For a moment I had thought that I would need a badge to be allowed to drive into Germany and there was no chance of me getting one in time. On further searching, however, it was only in certain cities and according to the map my hotel was just outside Bonn’s zone.

The hard part was trying to route myself to the hotel without driving through a Green Zone in either Köln or Bonn. The GPS just didn’t want to play. Ah! Now if you want to go that way you need to start from somewhere else, how about Rotterdam ?

Fine. I’ll play it bit by bit. I just need to remember that once I am in Germany I need to turn south onto the A61 for Koblenz and then as I approach Rheinbach switch the GPS back on again. That will save battery as well.

I crossed Belgium without any problems and after four hours of driving arrived in Germany. I wonder what all the signs mean. They put so much effort into invading France umpteen times during the last century and a bit you would have thought that they could at least use the language.

Oh look Koblenz [61], that was quick. Now to look out for Rheinbach. Let’s see, what have we got ? Signs for; Koblenz, Frankfurt, Warsaw, Moscow and Vladivostok but nothing giving me a hint as how much further I have to go.

Time to switch the GPS back on. Beep, beep, [Meckenheim], Calculating route. That junction for Meckenheim you just drove past — that was yours. Please continue to Switzerland, turn around and come back up the other side.

Well it wasn’t quite that bad but coming off at the next junction seemed to point me via a lot of very small villages and driving through peoples’ gardens. Eventually though I was on the right road and on my way to Bad Godesberg and from there it was up into Bonn.

Something that I did note. Out in the countryside coming down into Bad Godesberg the speed limit was 50 and 60 kph (with cameras I add). As soon as I was into the city the speed went up to 70 kph, which was a joke because oft times it would have been faster on foot.

The Maritim Hotel was easily found and I had a comfortable room on the fifth floor over looking my car in the car park.

One of the reasons I had chosen this particular hotel was because it was reasonably central, getting there looked straightforward and there was parking available on site. There was also an U-Bahn station right outside that would take me everywhere I wanted to go. Perhaps it does eventually go underground but it was more of a tramway to my mind. Regardless of semantics, it works.

It was early evening and the sun was out as I took the tram up into town. The weather forecast for Friday was now looking even more dire with talk of football matches being cancelled across the country due to violent storms.

Fine, I’ll get some photos in the sunshine now whilst I check out the ground. I got out at the university and walked into a large park with lots of folk sitting in the sun or walking their dog. There was a pervasive smell of grilled wurst everywhere.

The marriage was taking place in the old town hall, and I will say this for Bonn, the signing was excellent. Footpaths, cycle paths (must be the students because there were cyclists everywhere), tourist sites, all distinctly labelled with distances.

Sod’s law required that I had left the U-Bahn by the wrong exit for the Altes Rathaus but it made little difference as it was still only a few minutes walk away. Now that I knew how to get there I went for a dander in general. 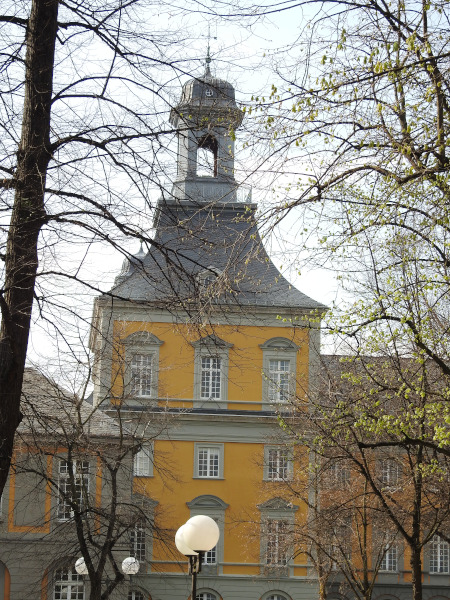 One of the towers of Bonn University

The centre of Bonn is not overly large. It was too late to visit anything so I just wandered about the squares filled with people drinking coffee or beer. I found Beethoven’s house easily enough and he more than anything seemed to symbolise the town, appearing on nigh every postcard, T-shirt, mug and probably hearing aids.

But time was pressing and I had been invited for drinks and food with the other early arrivals in Bad Godesberg where Vytautas and Evaldas live. That was another simple trip on the tram though once again I managed to get off at the wrong stop. Looking at the map I had spotted a stop at Moltkestraße but hadn’t noted that I was looking at a bus-stop not the tram. Soon rectified and the short walk meant I saw a bit more of the town.

Having to come hundreds of metres from their home it went without saying that our hosts were late. If I thought my six hours sitting in a car was butt numbing it couldn’t compare to the ten hours on the coach from Switzerland suffered by one of the couples.

We were a small group so the first introductions were reasonably easy to handle. We had come from all over the place, Switzerland, Lithuania, Germany and France and the major topic was : how do you know the couple ? Stories were told, beer was drunk and food was eaten.

My theory is that German beer gets served by the half litre because it doesn’t actually taste of anything. It might have alcohol in it but I wouldn’t put money on that. Looking back now I think that the suggestion that I drink the alcohol free stuff might not have greatly affected my opinion. It’s not as though it is unpleasant, more that you might as well be drinking Kronenbourg or Heineken !

For food, I had the pasta in an arrabiata sauce, the menu said it was HOT ! The chef has evidently never met my mother.

What we didn’t eat was the pigeon that flew into the restaurant, fluttered around a bit before being skilfully caught by the staff and thrown out. Never met a drunken pigeon before but at least it didn’t want to shake hands, sing or relieve itself in the corner.

At midnight the staff asked us to leave and I caught my tram back down the line. The ceremony was at 0810 so an early start was required. I would not be participating in the Hotel’s €19 breakfast — I was provisioned with a bag of croissants and petit pains.

Page 2: And the grooms wore blue
Page 3: The Ahr Valley