The Piper of Loos

Many months ago I was approached by my friend Gilles from the Museum at Loos en Gohelle who asked if I would help with a conference about the British 1915 Battle of Loos (Not to be confused with the French in 1914 and the Canadians in 1917).

Apart from the fact that it was a British battle it would be handy to have an Anglophone present in case there were questions.

I said that I would be happy enough to help as the conference would be starting the 100th Anniversary events in Loos. It was also timed to coincide with the Air Show at the Bénifontaine Aerodrome where I have my Canadian monument for 1917.

As it all approached it became clear that my participation was becoming more and more prominent to the point that I would be doing most of the talking, to what was, in all likelihood, going to be an all French audience. So no pressure then.

We spent a lot of time trying to reduce my notes on the battle down to something that could be given in an hour. No mean feat considering that the battle raged for nearly three weeks.

I reconstructed my battlefield map and a local map in high definition so that the Museum could use them on their centenary flyer and I have to say that I have been impressed by the results. They look well and folks have been appreciative of having the detail.

The thing about these local talks is that you can never be certain as to whether or not anybody is actually going to turn up. Gilles was pretty certain that it would be more than the pair of us because he had already insisted that his own family come along !

We had the main conference room in the town hall and seats for about 60 were set out. The room began to fill and before long we were having to sort out more seats. All in all I reckon we had a hundred lost souls who would rather listen to me than watch France play in the Rugby World Cup. Perhaps they had heard that we were offering beer afterwards.

Amongst the gathering were two Scottish visitors : David and Christine Law. David is one of the grandsons of Piper Daniel Laidlaw VC, who was known as the piper of Loos, having piped his battalion forward out of the trenches. To play he had to take off his gas mask during what was the first battle where the British used chlorine gas.

Fortunately they understood quite a lot of French, knew their subject and could follow all of the maps and pictures on the slideshow. Gilles and I had been worrying that enough Anglophones would come along that we would have to start translating things which would eat into our time.

All in all the talk was well received and I certainly needed the beer afterwards. 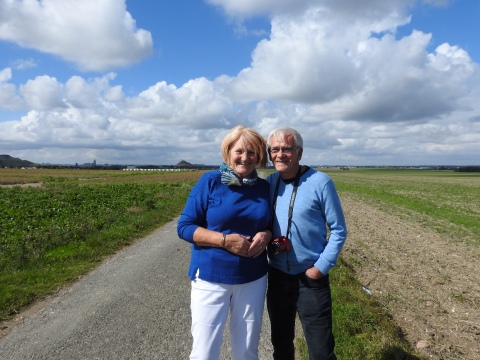 The following morning I helped Gilles mount the museum’s exhibition in one of the hangars at the aerodrome. One of the pilots complimented me on my exceptional accent when speaking in English !

We then took the Laws out for a drive to the point where Daniel Laidlaw had come up the slope towards the German lines. From there we spent time at the museum where they presented a photo of Daniel, who survived the war (he even played himself in a film). 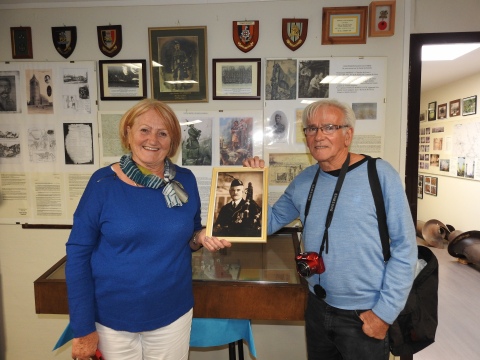 That evening there was going to be a special sunset show and the roads were already becoming chaotic so I suggested that Gilles and I walk over. It would take us half an hour but I was pretty certain that we could spend a lot longer just trying to get there by car.

When I left home the forecast was for storms at rain. That is weather speak for : lots of sunshine and take sunglasses. By the time we had walked the three kilometres we were both wondering why we were wearing jackets.

The climax of the evening was going to be fireworks and a display by the Somme Battlefield Pipe Band in honour of Daniel Laidlaw.

The Patrouille de France were first up and put on a full display that was only slightly marred by the fact that the setting sun made looking to the left painful. As the evening went on and it got darker the aircraft began using flares in their displays.

In front of us was a small copse of trees, which were soon lit up by some terrific explosions and the launch of a battery of fireworks representing the pre-battle bombardment. The dust and smoke began to clear and you could just about make out soldiers in kilts and a lone piper in the distance.

Then the entire band joined in and marched across the field through the smoke towards us.

The following day was the main event and although I am not really into fighter jets making lots of noise I can appreciate some of the aerobatics. The museum’s display was getting a lot of visitors, some of whom were British who were over preparing for the anniversary events during the week.

I was kept busy at times then helping to translate and just generally making a nuisance of myself.

The biggest disappointment for the day was the no-show by the British WW1 Display Team. Seeing some of these replicas in the air is what the show was supposed to be about; not watching modern jets that have in their turn been superseded by drones.

At least we got to see a replica Spitfire fly. Owned by a local Frenchman it has been painted up in the colours of the Polish Ace Stanislaw Skalski of 145 Fighter Squadron RAF.