We wanted to visit the castle at Trakai and having looked and considered the weather, today looked as if it was going to be the best bet over the weekend. In theory it was supposed to be a bit cloudy this morning and then brightening in the afternoon.

As we set out it was already pretty sunny but we dressed prepared for showers. Once at the far end it was a long walk down to the castle.

I had the tickets bought and sorted far quicker than I was expecting and we sat on the platform waiting on our train. An old lady appeared wearing the obligatory scarf and boots. As she made her way along the platform she threw out pieces of bread for the pigeons (of which we did not see a great many whilst on our rounds). She didn’t look as though she was that well off and on returning she bent down and picked up one of the larger crusts that was being ignored by the birds. The thought did pass through my mind that, well if they aren’t going to eat it I might as well myself, but in fact she broke it up into smaller pieces and threw them back down again.

Our rather flash duplex train arrived and we went upstairs for the short ride out to Trakai. At the far end we found ourselves in glorious sunshine with the lakes looking superb. The last time I remember staying on the main road but this time we followed the locals and took the short cut along the edge of the lake as far as the bus station.

There were a number of Americans walking along as well and some were obviously military with their cropped haircuts and Sir! Yes! Sir! We let them rush on as we took our time looking at the houses and enjoying the weather. Looking back on my previous photos I am reminded as to just how empty the town was in April, now the town was thrumming with visitors and coach parties.

It took us about forty minutes to reach the old town which is a hive of souvenir shops selling all sorts of gifts and trinkets — many of which we actually liked. Some of the things I thought we could get cheaper in Vilnius but if you wanted it personalised with “Trakai” then here was where you were going to buy.

First of all though we needed drinks so we paused at a stall where the two girls were listening to Lilly Allen. Good coffee and tea and suitably fortified we made our way out onto the castle’s bridge. A lot of people seemed to be leaving and we reckoned that many of the coach parties were departing for their lunch reservations.

Yesterday whilst visiting the Bernadine church in town we remarked how one group could only have been inside five minutes or so before their guide was ushering them on.

It was a wee bit of a wait at the ticket office as those in front tried to organise themselves. I think that today was the only time we were offered a pensioners’ tariff. I also paid for camera rights and at one point during our tour of the castle we were actually challenged to produce them. Not sure what they do these days — they can’t exactly confiscate the film any more.

The exposition layout is quite well done as it takes you from one room to another, but it does mean that you seem to be constantly climbing and descending stairs. None of us are getting any younger so we were just going to take it easy.

I wouldn’t have wanted to be there at a really busy time. It was warm outside and with the passage of constant visitors the rooms were getting very hot and short of fresh air. We arrived at the same time as a family who were being given a guided tour in Russian. They were certainly getting their money’s worth because the guide hardly paused to draw breath (which is a bit like watching Jason eat — he only slows up once he can see Mrs Bunny at the bottom of the bowl). Although we were taking our time and were not so nimble on our feet at no stage did the Russians overtake us.

It’s a bit snakes and ladders and having got to the top floor you now have to come down again. This is usually done in a narrow stone spiral staircase. I wasn’t certain that mum was going to be at ease so I suggested that they simply came back down by the way we had gone up using the wide wooden stairs. It was like watching salmon swimming upstream against the current as a coach load flowed around them. I could well be wrong but nobody seemed to be making any great effort to allow an elderly couple to descend. Everybody was in such a rush.

But, we were reunited once again in the courtyard and decided that we had enjoyed what we had seen, now lets go and find somewhere to eat. The thing to eat at Trakai is a meat filled pasty called a kibinai. Up the road we walked to a large restaurant which specialised in said kibinai. The menu showed lots of varients on a theme of meat in pastry, some pictures suggested that we would get quite a lot others suggested perhaps just one. The next question being — well how big is one of these things ? Looking around everybody seemed to be eating all sorts of three course meals but not a pasty in sight. 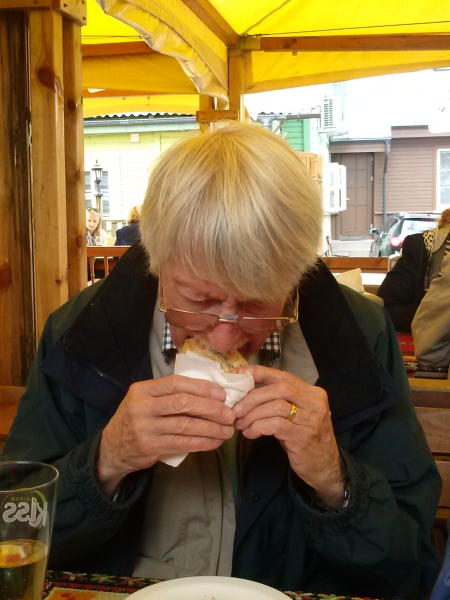 So we went for basic and the waitress, scowled, took our order scowled again and disappeared. The beer and cider arrived and some time later two plates arrived for mum and myself. The chap headed back towards the kitchens and I was expecting him to reappear a few seconds later with dad’s. Nope. In fact we had finished ours when his finally turned up. The verdict : they’re all right but nothing much to write home about (even if that is exactly what I am doing here). Bit on the small side. There’s definitely more eating in a tortoise and they are crunchier.

We just needed to go back and spend all our dosh on presents for the family and find ourselves tempted by ice cream. The lassie had to dig down in the freezer to find some of these cherry choc ices that were solid, those at the top were ready to be drunk from a glass. They were really good and kept us happy as we began our walk along the shore back towards the train station. On the way we passed a Smart car with the boot open and turned into a coffee bar. There’s an idea for Sandra and Peter for when they decide to give up mowing lawns.

I splashed out at a spice stall for some caraway seeds and saffron which were a lot cheaper than I can buy here in France. It is actually quite hard to find caraway here at all and when you do it is expensive. I have been bitten by the Lithuanian bug of making bread with it.

Our train back to Vilnius was an older one and the steps are quite a climb into the carriage. There do not seem to be many facilities in the country for folks with mobility problems. We managed rightly though without the need for grappling hooks and a joist and settled down for our ride. It was just starting to cloud over but we had no complaints at all, we had been more than fortunate with the blue skies.

Back in Vlinius mum and I left dad at the apartment whilst we rushed off to have a look in some of the amber shops. Mum wanted something in amber as she had missed out on the chance to buy when we were in Poland. The first shop wasn’t up to much but the second had a really wide choice. Of course the first pendant that we liked was one of the more expensive ones but within a few minutes the lassie proposed a number of others that we refined down to two. The deal was done without having to spit on hands or bleed thumbs together and a happy bunny left the shop.

It had all been quite painless.

There we were then. Our last day already in front of us and looking like being a wet one. Vytautas had offered to take us out for a drive and we were going to meet him at the changing of the flags ceremony at the Presidential Palace in the morning.