The family had come over in such a last minute rush in December that things got forgotten. To complete our festive bits and pieces Anton and Debs organised a day trip to Calais for the end of January.

What a change from last year when both sides of the Channel were under heaps of snow and it was -20°C some days. We have been having lots of warm days with it feeling more like March rather than the depths of winter.

I got up to the Cité at Coquelles before they did and had a quick wander around Carrefour to get some pain au chocolat (I had been up early and was badly in need of second breakfast). It is evident that the Brits are not coming in the droves that they used to. Tesco’s Wine Market closed last year and is just an empty hole now along with a number of other sales points. Carrefour has become a bit of a dump to my mind, though in fairness it was the dying embers of their sale so perhaps that is why it all looked a bit ragged and Lidl.

Anton and Debs were smack on time so we did some shopping had a wander about the Cité and at that stage stopped for a coffee. After that I suggested that as it was a very clear day we could do the coast on our way down to Boulogne.

You only have to drive out of the Cité, under the autoroute and on to Sangatte to reach the sea. The sky was as clear as a bell with very little of the haze that you get on hotter days. It seems odd to think that from here, England is closer than Boulogne. The only problem was the wind. We had gone off in Anton’s car and I had left my hat in my own. It was chilly around the ears (Actually it wasn’t; it was bad words cold).

There are two Caps looking out towards England. Cap Blanc Nez and then Cap Gris Nez closer to Boulogne. White Nose Point and Grey Nose Point.

I haven’t been up along this part of the coast since I came with Jean-Jacques in 2004 and it has been upgraded with a lot of work. The two Caps have been provided with proper paths around the German Atlantic Wall blockhauses in an effort to preserve the wildlife and flora. It seems to have been well done with car parks and explanatory panels explaining what the bunkers are for.

The emplacement of the cross channel, German battery called the Lindemann Battery (after the Captain of the Bismark), equipped with three 406mm guns is now submerged under the reservoir and debris created by the excavation of the Channel Tunnel. 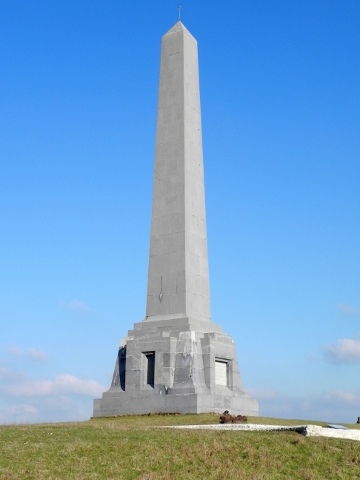 At Cap Blanc Nez there is a monument raised by the French in honour of the Dover Patrol of the First World War. On a day as clear as this when the White Cliffs of Dover are clearly visible it makes you think about the flotilla of boats running the gauntlet during Operation Dynamo from Dunkirk in 1940.

By the time the troops were being evacuated from the beaches Calais had already fallen so although the bunkers may not have been here the guns would have been.

Having been blown away by the wind at Blanc Nez we drove down to Gris Nez and from there we stopped outside the Todt Battery so that Anton and Debs could have a quick look. It was still closed for the winter, but would be something for them to do another time.

The railway gun on the site looked as though it was being given an overhaul so perhaps it will be spruced up by April.

It was well after lunchtime and we were now looking something and frites but January is not really the time of the year to be finding an abundance of friteries that are going to be open at midday.

A scenic drive along the rest of the coastal road brought us down into Boulogne and there we managed to find a friterie that not only provided a good meal but also acted as a wind block. So long as we stood in the sun, protected from the wind it was a very nice day.

Time wasn’t pressing but it was getting overcast and the drive back to Calais was a lot greyer than the way down. We had fortunately organised our visiting in the right order. Another coffee at the Cité and it was time to pick up my car and for them to head home.