It must be at least a year ago that my parents announced that for their sixtieth wedding anniversary in April 2013 they were intending to have the marriage blessed and then throw a party at the church hall for friends and family afterwards.

You just have to attend parties where the requirement is : No Presents !

Of course, my family can’t do anything simple. A bowl of crisps and a pork pie on a table was never going to do, especially if the table cloth was red and white chequers.

They have always liked the way the French dress up their tables with bits and pieces of simple decoration. Whilst they could probably have bought similar things in England if they looked about, we have a number of chains of decorative ware here in France which make the eyes ache with ideas. And so, last September when they were over, the folks and I headed to Incroyable for a look.

This allowed us to pick up the basics and choose the colours that we were going to use. The tables now had to be properly dressed with oodles of twiddly bits (it is hard to use the word without hearing Anthony Hopkins saying: “I do. I have oodles of time”). 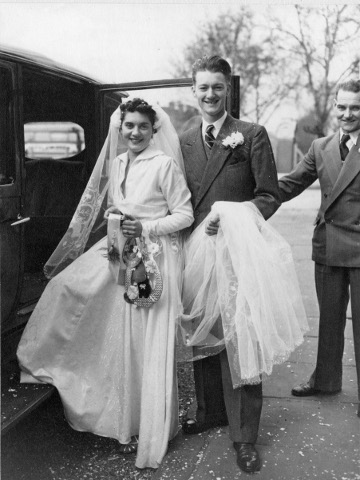 When we were young

Jobs were handed out. Nigel was looking after the photographs and the music, Anton was in charge of catering and I was to make sure that the hall looked well on the day.

We had bought two large glass candle holders to sit aside the cake and I bought various coloured sands with some really artistic ideas in my head about how to make everything meaningful. In the shops you see these various layers of sand used to create some stunning effects but my initial trials were not a success. In isolation they might have worked but not as an ensemble with an ivory covered cake. Keep it simple—and then complicate it with something else.

When Anton and Debs came over in May we went looking for suitable flower arrangements. The choice of quality artificial flowers these days is incredible and we chose a few different stems to work in groups of two or three to add a bit of colour to the main tables. Now that the ideas of what could be achieved were starting to gel I was kept occupied setting up arrangements, photographing them and then buying more things. The number of guests had gone up and we were going to have to add extra tables—more decorations needed.

Decorating tables was fine by me but I reckoned that as the eldest it was up to me to make the speech. That would allow dad to respond and thank everyone for going. Stubby pencil and paper time. A number of pencils reduced to stubbiness later I had the makings of something that could be typed up, tweaked, practised and re-tweaked. Two weeks later I very nearly forgot to print the thing and take it with me.

Off to England then. I had been occupied on the battlefields up until the last moment so it was only on the Saturday morning that I managed to jettison the maps and mud kit for a case full of flowers, coloured sands, pebbles and the final cases of wine.

Once upon a time

The day was organised that we would all head to church in the morning, come back at lunchtime and then the rest of the family would head to the hall to get it prepared. I wanted it to be a surprise for the guests of honour on their arrival and I also wanted dad to be able to have a drink without the worries of driving.

Now I am pretty certain that when I explained to dad that Anton would collect him, Anton was standing with us and driver and passengers were suitably up to speed on the arrangement.

Off the rest of us went and over the next hour and a bit the family laboured to get the tables set up decorated and the food organised. There was so much food that we were running out of space on the three tables that we had—and Anton and Alex were still heating sausage rolls. 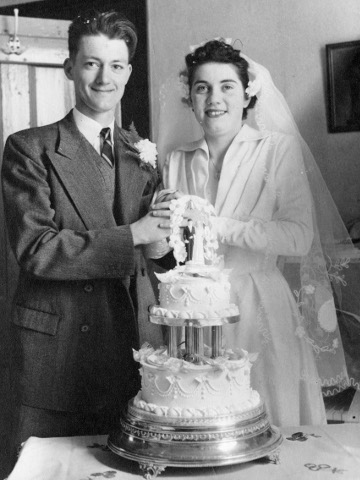 Twenty minutes to go and I need the last couple of tables cleared of our own bits and pieces so that they could be used. Giving the team timely reminders of the genre : They’ll be here in ten minutes, is excellent motivational skill. There was, however, a flaw .

This was made clear as the first of the invited friends began to arrive and Anton appeared from the kitchen. I’ve got dad on the phone. He says that: “We can see all the neighbours leaving for the hall so what time are you picking us up ?”.

In the mix of organisation Anton hadn’t picked up that he was providing the transport run. No matter, and in fact it all worked out for the best. Nigel headed back to the house and the guests arrived, grabbed a glass, settled themselves at a table and we were able to have the hall filled by the time that the Bride and Groom arrived—to applause.

Every bit like the Lord and Lady of the manor, they made their individual ways around the tables saying hello to everyone, gathering up dozens of cards and making sure that all were comfortable and that we the serving staff (I admit to having forgotten my tabard—heraldic device: sanguine, between two hands grasping, a beer bottle empty) were keeping glasses replenished.

Everybody was delighted with the setting, though a few hesitant voices did add that: Ted will still think it could be done differently. Aye, well that might as well be but after all but sixty years of: That’s really good. Did you think of…; today he gets told where to get off.

At last, the moment all have been waiting on. Lunch is served and none of that Roman muck. Proper meat and cranberry pie, salmon terrine, manchego quiche, Deb’s famous sausage rolls (get them while they’re hot, they’re lovely) and the list went on. It was a fabulous spread so I am allowed to advertise that most of it came from Waitrose.

People required little in the way of encouragement to go and have a second helping or try something a little different. I was quite surprised to see the Basque cheeses go so quickly, especially after dad had spent some time telling people that I had personally milked the ewe only the week before. With everyone now bloated (with the exception of us the happy helpers who hardly had a moment to eat or drink anything) we cleared part of the tables and put out the desserts.

Then it was time to chase everybody to ensure that they had a glass of something to hand so that I could do my party piece of a speech.

Not a dry eye in the house and for once my father was left without poems, funnies or even words. He didn’t really need them. Silence can often be as eloquent as the most gracious of prose.

It was a good afternoon.

“No matter what my father’s latest quest for self perfection my mother has always been there for him, working away in the background making sure that he gets his cups of tea and the odd slice of cake to keep up his strength in the daily battle against wrong notes on the keyboard or belligerent computer programs that do what he says rather than what he wants.

She brings sunshine into their lives and he worships the ground where e’re she walks.

May the years continue to be kind to them.

To Ted and Shirley.”