When I bought the house in 2003 I was assured by France Telecom that we would have ADSL in my village by 2004. These were still the days when I was naive enough to believe that FT were in anyway concerned as to whether or not the country was equipped with a decent Internet connection or not.

France Telecom then sort of became Orange. It’s rather similar to British Rail. The actual infrastructure of cabling is France Telecom but everything commercial is run by Orange and we now have various other telecoms such as SFR offering competition.

After a couple of years of dial-up Internet I had finally realised that FT were not whipping themselves into a frenzy to get rural France organised — where was the money in it when the population is so sparse. Between my commune and the coast there are only 17,000 of us according to the statistics.

I moved my fixed line to SFR because they were half the price to rent the line and for a fixed €20 a month I could call almost anywhere in the world for as long as I liked. My phone bill dropped by about €30 a month and I could now save folks money by calling them back.

In 2006 we were promised ADSL by the end of the year – but they didn’t say which one.

The problem for the village was that we were too far away from our local NRA (Exchange). You need to be less than five kilometres away for the signal to be powerful enough to function. I was almost ten. Even though the NRA was equipped for ADSL the signal had dissipated by the time it got my length. The solution was for FT to put in a new NRA in my village and branch us all from that.

In January 2010 I changed my portable phone with Orange and they mentioned that I would be pleased to hear that ADSL was actually going to happen in June. This time it was for real.
Then the Mairie suggested that they had been told that it would be more like September before anything happened.

I checked the systems page on the Internet in October and yes we were still getting ADSL in September: two weeks ago !

November came and went and the Village Christmas Bulletin came out advising us all that France Telecom had promised that the NRA would be active by the end of the year (Oh it was THAT year they had been talking about).

Whilst out walking I had noticed this new structure on the side of the road in the village. It looks like a double doored changing room locker. What I hadn’t noticed was any sound. The hamsters responsible for running the dynamo wheels were all fast asleep.

At the New Year get together Monsieur le Maire announced that the NRA would be switched on in the third week of January 2011 — and it was.

Overnight I was eligible for ADSL – who to go with ? Much to my disappointment SFR said they couldn’t offer anything; end of story. Some of the other companies were offering ADSL but they all required a line with FT.

I decided that if it had taken FT this long to run lines out, the other telecoms would not be in any rush to provide their own lines as opposed to renting from FT.

Oh well, if you have to have the line with Orange, I might as well go and talk to Orange.

Went down on the 4th February to Abbeville and their boutique. It was all very complicated if I wanted to retain my telephone number. They organised the transfer of the account back from SFR to themselves – they made it sound as though somebody was going to have to go and dig up the road again as opposed to sending an e-mail.

I was told it would take a week to set up.

A week later the phone was cut off. I enquired as to why and was told that my new Internet account had been activated so I needed to activate my Livebox equipment. Plugged it all in — nothing. Flashing red light, system not yet activated.

On the Saturday I was over in Magnicourt so used Hilary’s machine to check my account. The old one was defunct and yes the new one said that the account was activated. However when I started checking the assistance pages it referred me back to my account. Follow your order, informed me that the account may well have been set up but it was awaiting activation. I would just have to stay phoneless for a while longer.

Monday morning I received a text on my portable saying : Welcome to your new Internet account, get on-line and surf at super speeds.

Switched it all on — flashing red light. Phoned Orange. No, the account has yet to be activated. So why send me a text saying it has been activated ? No idea.

Thursday I received my second text saying that the account AND the line had been activated – go for it. Switched it all on — flashing red light. Phoned Orange. We’ll send a technicien which may be charged if the fault is at your end.

The following morning Monsieur arrived did some tests and did that great sucking in of air between gritted teeth that always precedes : Doesn’t look good. I’ll be back on Monday with the heavy lifting gear. We are going to have rewire the connection. If you want it to remain underground you will need to dig a trench and get the pipe – it’s green.

Saturday then was passed searching high and low for green entrenching pipe for communications wires. I could have every colour under the sun except green. And it has to be green or it isn’t legal. 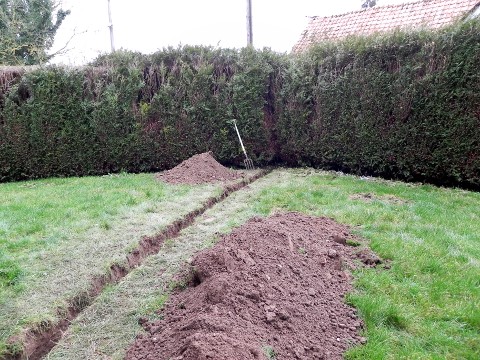 I ended up in Boulogne where Leroy Merlin had 1 roll left.

Monday morning was spent digging in the garden and on the dot at 1400 hours two vans arrived at the front of the house.

But, they had already warned me that there was still a worry that nothing was going to work because they had already had to make one trip back to the NRA to get a signal to come down the line. 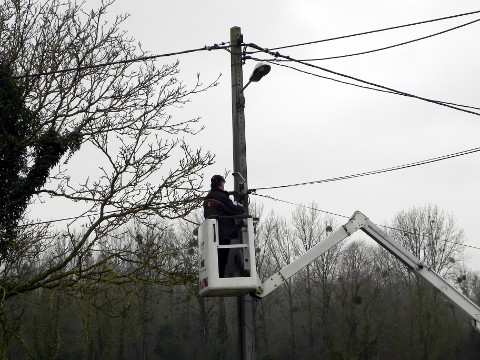 The system may now be super-dooper but the old wiring in much of the village isn’t up to it and I was by no means the only resident with a problem in trying to change to ADSL.

Switched it all on – flashing red light. Final stage was changing a card at the NRA ( I had the vision of Star Trek coloured chips being moved about). Half an hour later my Livebox went on-line. Just like that.

An hour or so later I received a message saying that my phone was now working as well.
I’ll give it 48 hours and only then fill that trench in !

Finally here we are Monday 21st February 2011 and after only seven years of waiting it has actually happened.

To celebrate my ability to send larger files up to the site, here are some slightly higher quality shots from recent walks over the hills. I now have to remind myself that not everyone is on ADSL and refrain from placing huge files on my sites.

I have discovered that I have at least a pair of common buzzards living in the wood up on the hill. I have seen three on a number of occasions so perhaps one is a youngster. As you can see we have been having some very clear days – though out of the sun and when it is damp you are reminded very quickly that this is still only February.