They lied the peasants ! For days we had been carefully watching the weather forecasts and it kept saying that Thursday was going to be the best day of the week; until we got to Thursday morning.

Not a blue cloud to be seen just the usual grey sky. Teddy has left the cot along with all the other toys !

But off we set anyway on my mystery tour. It was an easy drive and most of it was dual carriageway. We got down past Compiègne and I started to worry that I had missed the turning, then up came the big panel: Pierrefonds Next Exit. 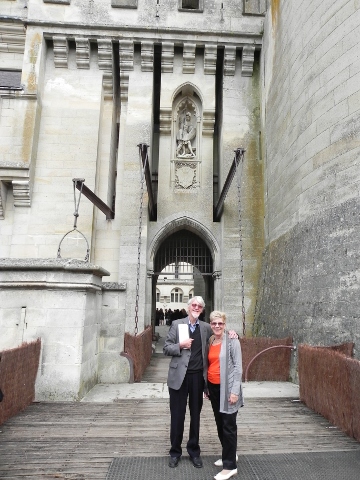 So we exited, went through the Toll Barrier and reached the main road, where it was up to the traveller to guess as which way he was now supposed to go because there was no sign post. Evidently we got it wrong the first time and had to turn around.

You drive very slowly through the forest of Compiègne because there is always a possibility that deer could bounce out across the road (often immediately followed by stampeding bunnies and a tyrannosaurus crashing through the undergrowth – we have all seen the film).

The weather was still miserable when we arrived at the village of Pierrefonds but even so the château remains incredibly impressive. It towers above the countryside and looks a wee bit out of place. It also looks odd to have buildings around it because we now know it as Camelot from the BBC Series of Merlin where the k-nig-its (I am in France) ride across the drawbridge and off into the wilds of the Czech Republic, or wherever the woods are located, by the magic of mystical, digital trickery. The original druid blue screen was a wall of woad painted warriors.

We found a place to park and eat our sandwiches whilst we waited for the grounds to open again after lunch. This gave us time to stop for a coffee in the village before climbing up towards the castle.

At the pedestrian entrance I noticed a sign mentioning the fact that Merlin was shot on location but that I knew already, what I wasn’t certain was if they meant that they were in the process of shooting.

The answer to that became self evident very quickly as we passed alongside the sets that are used for the lower town of Camelot and arrived at the Ticket Office. There were peasants and knights in not very shining army and rusty mail wandering meaningfully towards the drawbridge.

Then a car pulled up and out stepped Angela Coulby looking much more regal and clean than the extras. Everybody was standing outside which seemed odd because nobody was actually stopping us from entering. So off we went.

The château of Pierrefonds was created by Louis d’Orléans in 1393 as a fortress intended to watch over the antics of his great rivals the Dukes of Burgundy in Bourgogne and Flanders. 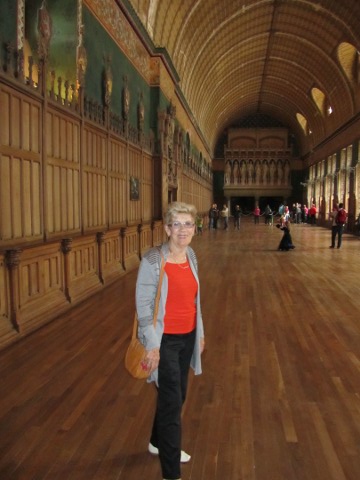 In 1616 however the castle was besieged by troops sent by Cardinal Richelieu in support of a campaign by Louis XIII against what were known in France as malcontents. Having taken the fortress Richelieu intended to have it knocked down but the task proved impossible and the ruins were left until bought by Napoleon in 1810.

By the time of Napoleon III in 1852 there was a growing interest in France about her medieval heritage and the emperor asked the architect Viollet-le-Duc to reconstruct the château.

Instead of rebuilding however, Viollet-le-Duc decided to go the whole hog and created what should have been, and not, what had been. The result is this fairytale castle which has with the aid of television become the perfect castle of myth.

It looks and feels new, so when we saw the extras walking about the set, which that day happened to be the courtyard, it felt as though we were the intruders brought there by the TARDIS (whose owner had popped off again to recover his recalcitrant T-Rex in the forest).

As filming was taking place in the courtyard we were limited to certain moments when we were allowed to pass through the crew to get to the main buildings. Whilst waiting though we got the chance to see just how much inaction there is on set. The waiting about that the cast have to go through as the cameras are moved or realigned for a secondary shot. Hours of work for what will probably turn out to be sixty seconds of screen time – and no I am not going to let the cat out of the bag and spoil it all for youse. I don’t need to have the Beeb hounding me.

Cut ! and we were able to sneak round the corner and into the donjon. Whilst some of his ideas about castle fortifications were correct Viollet-le-Duc let his imagination run free for the interior decoration. The result is impressive, especially in the larger rooms where we presumed that any furniture had been moved out of the way for filming. 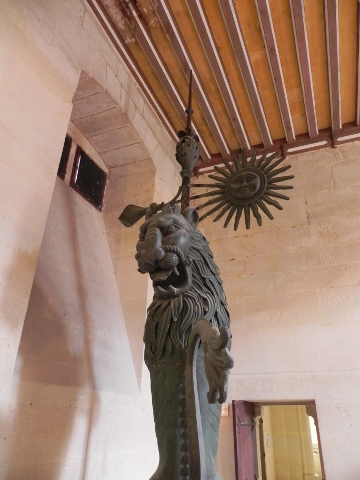 The Salle des Preuses (great hall) is the former justice chamber and takes its theme from the valiant knights (Preux or Preuses in French) from times of chivalry. Just outside on the balcony Queen Guinevere joined by Arthur were waiting their queue to look stately once more. Time will tell if our noses pressed against the window will show on the TV screen.

I would have to say that there is not a great deal to see apart from the rooms themselves. There are no state bedrooms to be visited or great collections of armour hanging on the walls (though I get the feeling that Napoleon III did have a collection here).

Monduit were renowned for their work in either creating or restoring works of art and can count amongst their projects the Statue of Liberty, the steeples of Amiens and Notre Dame de Paris cathedrals and I noticed: the weather vane of Arras town hall.

Our visit finished we walked back outside to find that it was a lot warmer than we had thought. The sun was out and it all looked very pretty with the banners of the Pendragon family hanging from the walls.

By the time however that we had walked back down to the town the clouds had come back over and we were forced to think about another decent coffee and buns before setting off for home (and dad got proper pistachio nougat as well).

The following day it was pack the bags and take the folks back to Blighty.