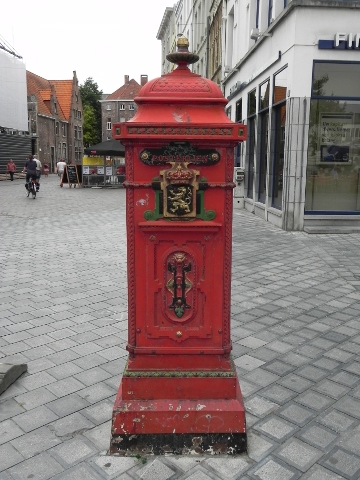 After a hectic month or so getting ready for my two inaugurations for the 48th Highlanders of Canada I have at last found a moment to post some photos taken over the summer (what there was of it).

First stop then is Gent which Hilary and I visited on the way back from a trip to the Netherlands to collect three sacks of ‘highland’ woolly pig hair. This is apparently very difficult to spin and work with but Hilary is able to do so and produces incredibly warm knitted garments from it.

It was a long trip (300 km each way) but apart from a few kilometres at each end it was all done on the Autoroutes. We had considered Antwerpen as a stop off but one look at the traffic system and I decided that it was a more formidable task than I was prepared to undertake after a long drive and on limited time.

So we settled on Gent a little closer to home and a place I haven’t visited since I was in shorts.

We parked up and wandered through the streets to find a café for a well deserved beer and a chance to orientate ourselves. By chance we had walked into the Vrijdagmarkt Place with its statue of Jacob van Artevelde. At the beginning of the Hundred Years War Jacob initially organised the Flemish wool towns into neutrality in order to keep their trade going (and make pots of money) but he came undone in 1345 after overtly siding with Edward III of England and got himself murdered by an angry mob who didn’t want the Black Prince as Count of Flanders.

Refreshed, we wandered off to have a look at the roadworks. Well, not really, but the town did look as though it was hosting the Belgian Navvie Convention. Everything was either being dug up, knocked down, or rebuilt.

The town sits on the confluence of the Lys and Escaut rivers (Leie and Scheldt in Flanders) so there are lots of bridges and canals. It isn’t Brugge but still pretty and the medieval buildings have been well preserved. 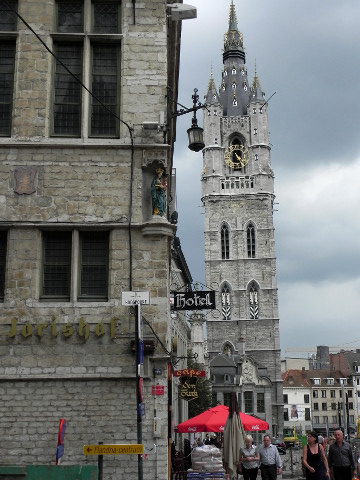 We managed not to get run over by trams and reached the castle – the Gravensteen. At the ticket office I found myself somewhat humiliated by being told that in fact I would have qualified for an age reduction on the price.

This was the place where my brother Nigel bashed his head on an archway so many years ago. He could do the same today at his height but at the time he was on my dad’s shoulders. Said parent forgot to allow for the extra headroom. Thud !

The Gravensteen was built in 1180 and used until the 14th Century when it was abandoned and allowed to decay. At one time it was even being used as a factory. In 1885 the city bought the site and restored the castle. Whether or not is is ‘authentic’ is an oft discussed subject, but it brings in the tourists.

As we came back outside it began to rain, but our parking meter was beckoning in any case so we made our way back to the car and continued on our way. After a day of driving on the flat across Belgium it was nice to see the hills of Artois.