I was on my way to meet my friend Vytautas and his sister Rasa at Hampton Court. The calculations had been done and my brother Anton and I reckoned that to get there for 1000 I had to be in England by 0700 at the absolute latest.

Negotiating the M25 is always difficult. Ten minutes behind time can add hours to your journey, especially as I was looking to get through the early morning rush hour.

Changing my watch back the hour I arrived in Kent at 0625 and up until the M25 it was reasonably plain sailing. And then : lots of flashing lights and warnings of a 40 speed limit. That is supposed to be mph but I couldn’t even manage 40 kph. And we came to a stand-still.

Suddenly it all cleared and off we went. A few kilometres up the road there were three very sad looking cars on the hard shoulder. I had set the GPS on my phone for Hampton Court Palace and the route was very straightforward. I crossed over the Thames at Kingston and was told to : take the third exit on the roundabout and immediately turn left.

That had me in front of the gates of the palace and a surprised security guard. Just behind him was a Car Park sign so I pointed, smiled and drove in. It was deserted. Ah ! It was only 0815 and the palace didn’t open until 1000. So that was why Vytautas said he would be arriving about then. 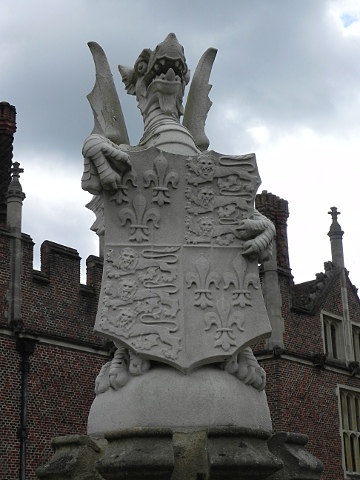 I managed to kill the time with a coffee (actually a cup of hot frothy milk that may or may not have been introduced to ground coffee beans) and sat at the station in the alternating sun and will it rain black clouds.

Vytautas and Rasa arrived and we set off for the palace – a place I haven’t visited since I was a wee lad; that being one of the reasons why I had chosen it for a meeting. You can only visit the Tower of London so many times.

My two friends picked up their free audio guides which were rather like portable phones and explained why everybody was walking about with a hand to their head. I decided to wander about and look and read about it now.

The manor at Hampton had originally been acquired by the Knights Hospitallers of St John Jerusalem in 1236 and used it as a grange. Not a great deal happened on the site until 1514 when the Knights granted a 99 year lease to Thomas Wolsey, the Archbishop of York (later to be a Cardinal and Henry VIII’s chancellor).

Unfortunately despite his providing sumptuous apartments for the King and his (first) wife Catherine, Wolsey spent so lavishly on his Court that critical remarks abounded suggesting that when people talked of going to Court that they meant his and not the King’s. In 1528 with the divorce crisis approaching its height Wolsey gave the palace to Henry.

Catherine was the aunt of Holy Roman Emperor Charles Quint who had imprisoned the Pope at the time of Henry’s original request for a divorce. It was obvious to Henry that the Pope was not going to certify the divorce and in 1534 declared himself the only supreme head on earth of the Church in England. 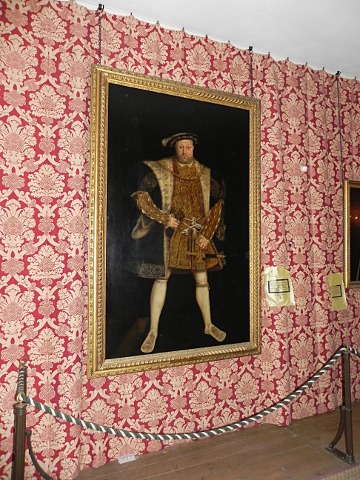 On a side note both Henry VIII and Charles Quint ravaged my local town of [Vieil-] Hesdin. Charles completely destroyed it in 1553 and ordered the current town of that name to be built.

Hampton Court soon became Henry’s favourite palace and he spent a fortune on the buildings and interior decorations. The tapestries in the great hall are of the finest work from Bruxelles and depict the life of Abraham. The hammer-beam roof was reportedly cobweb free so it may well have been treated with oils (such as sandalwood) which are spider repellent (my kind of roof).

The first stop on our self guided tour was the kitchens. They eat a lot of meat, them Tudors, and according to one of the staff wouldn’t touch root veggies because they represented the devil’s food as they grew underground.

All the meat was jointed and then spit roasted. This took a lot of time and effort in comparison to simply cooking the entire carcass on the one spit. This was quite intentional as it alluded to the power and wealth of the King – he could afford to cook this way. His staff had to cater for over a thousand people and often more at the great state banquets.

Whilst the people themselves didn’t believe in a great deal of washing (in winter you got sewn into your clothes to try and keep warm) the kitchens were kept remarkably clean. The people looking after the fire in the main chimney were saying that the soot on the walls was created because the fire they had going was nowhere near big enough to really get going and thus smoke tended to drift. Henry would never have stood for it.

Wandering about the corridors we came across people dressed in Tudor costumes and at one point the King himself ploughed through the middle of a group of tourists with a great booming voice telling them to begone !. When later we met him again Vytautas struck up a conversation and asked if he could have his photo taken. Sir, it is required of you to beseech us to grant such a wish. His English is more than excellent but that one went straight over my Lithuanian friend’s head. Say please.

And who good sir is the ruler of your far off country ? Well the answer to that is actually Žygimantas II but it has to be said that we did not win the Million.

When William III came to power he asked Sir Christopher Wren to rebuild the palace. The original proposal was to knock it all down (bar the Great Hall) and start again. But, thankfully, that didn’t happen and only the Royal Apartments were modernised.

By using a similar coloured brick the two styles of Tudor and Baroque blend reasonably well and the transition from one part of the palace to the other does not jar on the senses. In the apartments though I thought that William and Mary’s chambers seemed less imposing – despite some wonderful paintings and carved wood by Grinling Gibbons (I have to admit to being half way around the apartments before I finally realised that a Grinling Gibbons was a who not a what).

Having explained to Vytautas that King Billy was always depicted on a white horse I was pleased to see that the portrait in the next room showed him exactly as predicted.

It was by now halfway through the afternoon and my eyelids felt like lead, and my stomach definitely thought that my throat had been cut. But we still had the gardens to visit. Looking back at the photos now, I am reminded as to how black the sky had been for much of the visit. But then a few rays of sunshine burst through as a sign of better weather to come.

The one thing that we wanted to do was visit the Maze. It was commissioned around 1700 by William III and planted using hornbeam (which has been replaced with yew). It is thus the Kingdom’s oldest surviving hedge maze.

It is not very big but was fun to explore. Only a few dead-ends but you do find yourself coming back to the same junction from time to time. I am also absolutely certain that it was harder to get out from the centre than it had been to find our way in.

We collected my car and found our way to Richmond Park for our picnic lunch. We even saw a deer grazing on the side of the road. It only rained for thirty minutes throughout the entire day. Sod’s law required it to be the thirty minutes we were trying to eat.