A day in St Omer

Between working on my two inaugurations in September and updating my Battlefield pages I have been kept busy at the computer. Outside the window the grass has grown longer and longer as the weather goes from warm and wet to hot and wet.

I read that this is all the fault of the Jet Stream which is temporarily geographically misplaced. Around my village it feels more like being under a Soda Stream.

Having just sorted out lots of photos I thought it about time to post some of the town of St Omer. Last month I had to get the car sorted for its Contrôle Technique and it needed a service anyway. All went well but the cloud on the silver lining was that it was necessary to change the Timer Belt. That costs pots of money and takes the best part of a day.

I booked the car in and the garage lent me a wee Citroën C3. For once it even had some fuel in it. This was back in the days when we were still being visited by a large ball of flaming gas in the sky and rather than just drive home I decided to drive the same distance up to St Omer : a town I have driven around numerous times but never really taken the time to properly visit.

There are a few connections with the Great War not least of which is the Aerodrome on the outskirts where the HQ Royal Flying Corps spent much of its time and a number of Squadrons were formed. Field Marshal Lord Roberts VC died in the town in 1914 having caught a chill whilst visiting the Indian Corps and both Sir John French and later Sir Douglas Haig had their residence here for a while (using the same house).

But apart from that the town is really pretty and despite my misgivings about all things green and growing I was most impressed by the public garden and arboretum.

I parked more by hazard than design and set out to find Lord Robert’s house. That was in Rue Carnot and although I was parked opposite number 36 somewhere I couldn’t see a street sign. So I walked up to the top of the street to get my bearings. I was already in Rue Carnot and the house I was looking for was back down the street and fifty metres from the car. 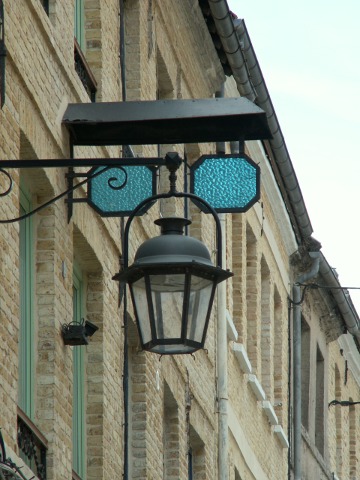 At this stage I realised that I had forgotten something in the vehicle and went back to get it. Pushed the button on the key but nothing happened. The car was unlocked. Closed it up clicked the key – nothing. Tried putting the key in the lock and turning it. Round and round it went but nothing locked. Hmmm ! A moment’s thought. Not my car and there is nothing of value in it. Let’s go walkabout.

Saint Audomar as Bishop of Thérouanne in the 7th Century founded the Abbey of St Bertin on a nearby hill. The town that sprang up around the abbey took the name of St Omer as his name was now written.

Originally Flemish, then French, then Flemish again before finally returning to France in Louis XIV’s reign the town was also besieged by the Duke of Marlborough during his last campaign in 1711.

In 1212 the town had passed through marriage from the Count of Flanders to the Count of Artois (with French becoming the official language). Two years later, an unhappy Ferdinand Count of Flanders decided to try and win back the towns of St Omer and Aire sur la Lys by force of arms. Forming a coalition of powers, the central architect of which was King John (Sans Terre) of England, war was declared on King Philippe Auguste of France.

John’s efforts to lure the French away from the north towards Normandy failed and the remainder of the coalition under the Holy Roman Emperor was soundly crushed at the Battle of Bouvines on 27th July 1214. A knock on effect of his disastrous meddling was that John was forced to sign Magna Carta the following year.

I wandered around the back streets alongside the main square (Place Foch) and visited the cathedral. I have been in here once before but only fleetingly and was pleased this time to see the Standard of 16 Squadron RAF on display. Having been formed at St Omer during the Great War the Standard was by tradition returned to the town on the Squadron’s disbandment in 2005.

St Audomar might be buried here and the Irish monk Saint Erkembode definitely is.

The story goes that the Irishman had come to France in 723. He was appointed Abbot of St Bertin and later Bishop of Thérouanne. As the diocese was spread between the valley of the Somme and modern day Ieper, Erkembode spent much of his time on foot visiting the far flung reaches of his domain. By the end of his life his continual travels had rendered him almost unable to walk. 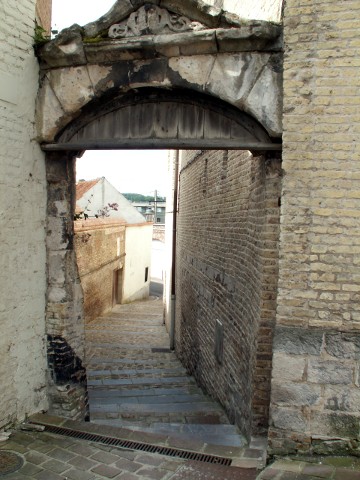 Having constantly prayed himself, the tomb of the Saint who Walks has become a focus for prayer; in particular for crippled children. Shoes are placed on the sarcophagus in the belief that the Saint will intercede on behalf of the child.

I was about to be confronted by children who were not only capable of walking but also running, leaping and above all screaming their lungs off.

Leaving the Cathedral I descended one of the narrow alleyways and took the subway under the main road to the Public Gardens. By all accounts its walls are the only remainder of Vauban’s fortifications after Louis XIV’s conquest of the town (just after he had trounced William of Orange at Cassel in 1677).

Well the wall was there and it looked rather like a brickie’s tip had been dumped alongside. Not terribly inviting but who knows, so I walked along the rather sad trail into the wood. After a short distance the path opened out and there was bandstand and then there were flowers and a kiddies playground. The playground was fabulous – not a child in sight.

Some of the trees are enormous and in the central part of the garden have been named. They are from all over the world and some must have been here for quite some time. I wandered about on my mission of exploration and found a small enclosure where we had some deer, goats and peacocks. As this is France we also had some splendid looking chooks.

It was lunchtime so I clambered down to the French garden alongside the walls. Very pretty, so it was, and there was just a young couple sitting on the grass on the far side.

Got my sandwiches out, found my glasses opened my book and :

So I exaggerate a little. None of them would have known that there is question mark at the end of the sentence. Hordes of little Brits all aged between about ten and twelve. What is it about British girls that require them to scream at the slightest provocation, such as : five seconds of silence ?

I did have two young boys wander up and say Bonjour to see if their French worked. For a moment I considered turning into Father Jack but as they had been polite enough to say hello I responded in kind.

I finished my lunch and set out on my travels again leaving behind the British Under 12 Olympic Screaming Team, one of whom I would swear was able to make the petals fall of the roses.

There are some really nice buildings in the town and thankfully the devastations of the Second World War have not left too many scars. One that did though was the ruined abbey of St Bertin. The original nucleus for the town, the abbey was closed by order of the Revolution and by 1830 the locals wanted it removed. So they knocked it down and built their Hôtel de Ville with the stone. They did leave the tower though but it fell down in 1947 possibly as a result of the previous air raids undermining the foundations.

There is a connection between the Royal Irish Fusiliers in Armagh and the 8e Régiment d’infanterie of St Omer. It was their predecessors who lost their Eagle to the 87th Foot (As the Fusiliers then were) at the Battle of Barossa in 1811. The Standard of the Royal Irish Fusiliers has since been surmounted by a Napoleonic Eagle commemorating the fact that they were the first British regiment to capture one. 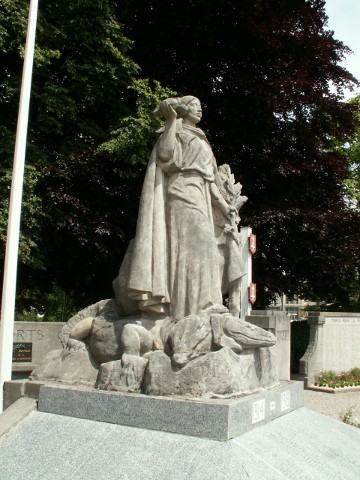 The rather unusual war memorial

Being me, I wanted to find the 8e RI’s old barracks. I found two; the first of which was opposite the war memorial. A most curious affair with a lady holding up a dove in one hand whilst her foot rests on top of a two-headed crocodile.

Arriving at the Tourist Office I suggested that was about to ask the daftest question of the day. Why was there a crocodile on the war memorial ? There is ! Really ! Do you have a photo ? Wow ! I drive past it every day.

Some searching in numerous books and we discovered that this is not a crocodile it is in fact : the beast of human carnage overcome.

My second question confirmed that the barracks that I was looking for was the one just down the road. As it had the Police and CRS barracks attached I decided against wandering in and taking happy snaps.

Look at the time — the C3 was still there and my own car was all ready by the time I was back to Fruges. I think it started to rain on the way home. We know the rest.