Vytautas the Great and Trakai

Who doesn’t like a decent castle especially if it has real history (blood, guts and destruction) as opposed to looking pretty and somebody important lived there.

One of the most imposing figures in Lithuanian history is Grand Duke Vytautas the Great and he is closely associated with the island castle at Trakai about 28 kilometres to the west of Vilnius. The photos in my wee guide book were most enticing and Evaldas in one of his lectures on history had wetted my appetite to go and have a look.

It seemed reasonably straightforward. Catch my No 7 Trolleybus to the Stotis which couldn’t be difficult because that’s where it had its terminal. Then sort out train timetables and buy a ticket. There was a Tourist Booth in the station so I could ask there and get a decent map

Got off the trolleybus and tried to get into the station. No, No ! You can’t come in here. Well of course I had no idea what the bloke was saying but : Bugger off, we’re filming in here translates pretty much into any language. So, I couldn’t get in through the main doors but remembered from yesterday all the passages underground. It is like a maze down there and I was certain that this was where I had seen the Tourist Booth. 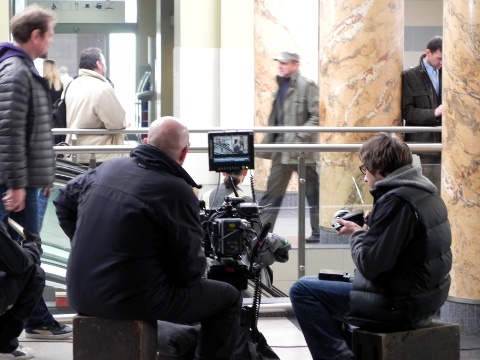 I could have been a TV star

After five minutes I had managed to find the supermarket, the toilets, the consigne and the customs checkpoint. I had even arrived on some of the platforms and back out the front again. Eventually I sussed how to get to Platform 1 and enter the hall from the far side. I got a timetable and found that I had an hour to potter so set off again in search of the hidden tourist clerk. 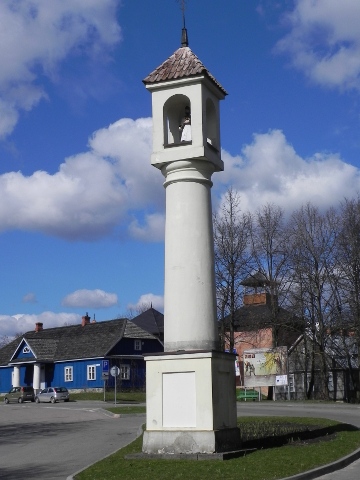 Turned out to be easier than I thought once I had crept around all the cameras, extras and green screens (why would you need a green screen in a railway station ?). The chap gave me a map and explained that it was better to take one of the buses because they left you a little closer to the town. The train he informed me was for older people. Having seen some of the buses in the coach station and the way Lithuanians drive he had obviously missed the point that those who use the train; live to be old.

Most importantly the map showed that it was straightforward to get to the castle and that the Trakai station was the end of the line. I wound my way back to the booking office and forked out my Lt6.20 (the equivalent of two Euros) for my ticket. The train pulled in and I was actually impressed. It was spotlessly clean, very comfortable and I couldn’t see the tracks through the floor boards. Vytautas was horrified when I remarked on this. He has never seen the train to Aprelevka out of Moscow.

The train bimbled along and about 40 minutes later we arrived. We all got off and in the time honoured tradition of the lost tourist : I followed everybody else and thankfully they were going to the town rather than the local maternity wing. It was a bit grey overhead but the forecast was for sunny periods in the afternoon.

I was a bit surprised by the town, all that talk of medieval dukes and castles had me expecting something less modern, but as you get towards the top of the town, concrete gives way to wood. You have entered Karaimų gatvė, the street of the Karaims.

This tiny population (almost extinct) is all that remains of the Turkic Karaims brought from the Crimea by Vytautas the Great in 1397-1398. For a hundred years the Karaims formed the ducal bodyguard and ensured the security of the castles in Trakai. When the centre of power was moved to Vilnius the Karaims got on with their fishing and agriculture. 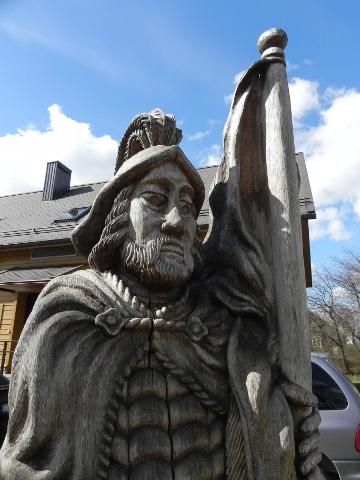 What marks them as interesting is that their beliefs are based on a radical acceptance of the Old Testament as their sole reference. Coming from an area adjacent to the world of Islam some of that religion’s ideas have influenced their thinking (unlike Jews the Karaims remove their footwear on entering places of worship). Controversially their leader provided the Nazi occupiers with an entire list of the population so that they would not be confused with the large population of Lithuanian Jews.

Their colourful wooden houses line the street with three windows facing the street – one for God, one for Vytautas and one for the household. Their place of worship, the Kenesa is the oldest in Lithuania. Big surprise though; it and the cultural museum were closed.

Nearby is the peninsular castle (by now I am a dab hand at spotting the word pilis and its derivatives). There is not a great deal left of Trakai’s original fortifications. The structure dates back as far as 1387 and was the largest in Lithuania with eleven towers. From its position surrounded by lakes it must have been a formidable position until the Russians came along in 1655.

The castle, however, that all us tourists come to see is the one on a small island a little further along the peninsular. Its construction began in the 14th century on the orders of Grand Duke Kęstutis, and was completed at the start of the 15th century by his son, Vytautas the Great.

So, I keep mentioning this chap Vytautas, what was it that made him Great ?

As I have previously mentioned Lithuania’s King (There can be only one) Mindaugas toyed with Christianity but never made much of an effort to either convert his people or himself for that matter. With the Teutonic Knights just to the west constantly champing at the bit to save the population from the error of its ways, a fine balancing act was needed by Lithuania’s rulers.

Eventually in 1386 Grand Duke Jogaila chose the Catholic Polish Queen Jadwiga as his bride, became King of Poland as King Władysław Jagiełło and converted Lithuania to Christianity. There was then a contracted period of bitter rivalry between him and his cousin Vytautas as to who should rule in Lithuania (that the King had imprisoned Vytautas and murdered his father did not leave him on the Christmas card list). Ultimately Vytautas was offered the title of Grand Duke but subservient to the King of Poland.

Lithuania already controlled large areas of what we would call Russia and before beginning a campaign to assist the Golden Horde against Timerlane in 1398 Vytautas exacted promises of control over further regions of Russia currently ruled by the Horde. The campaign was lost but Lithuania managed to come out on top by its pre-nuptial bargaining and now stretched as far as the Crimea – thus the arrival of the Karaim to Trakai.

Although Vytautas had been baptised (twice) the Teutonic Knights continued to harass his western borders and war became inevitable. As you will be aware because you have been paying attention the Knights controlled almost all of the coast having been granted land by previous rulers. The population rose in revolt in 1409 and Vytautas and the Polish Kingdom (the two countries being united by a common family) seized the moment to go to war.

The two opposing sides eventually faced off on 15th July 1410 near the town of Grunwald (The Lithuanians call it Žalgiris and we would say Tannenberg) for one of the largest battles in medieval history and certainly the most important for Poland and Lithuania. I remember seeing a huge victory statue in Kraków created for the 500th anniversary.

Accounts differ greatly but the Knights were slightly outnumbered (39,000 to 27,000) whilst having the advantage in training, equipment and discipline. Vytautas started the battle with an attack by his light cavalry on the the right flank. After an hour or so of heavy fighting and not being able to break through Vytautas ordered a retreat and left the battlefield leaving his cousin and King to get on with it.

Treachery ! cry the Poles. Cunning plan, say the Lithuanians who had learnt a thing or two fighting against Timerlane (but my friends feel that it would have been dangerous to reveal this spelndid plan to those pesky Poles). Leading his forces away Vytautas drew a large number of the Knights after him into neighbouring marshes.

The battle now concentrated against the Polish and Grand Master Ulrich von Jungingen personally led a charge which threatened to break the Polish line. Just as things appeared to be going severely wrong for the King, Vytautas brought his reorganised army back onto the field and that was about it. Von Jungingen was killed and the Knights were forced from the field. Their power forever broken.

Lithuania was thus grander than ever before and had dealt a mortal blow to the Teutonic Order. Vytautas was raised to the status of national hero.

Back to the castle then. It was started under the orders of Vytautas’s father Kęstutis and was enhanced by Vytautas with the building of the donjon and ducal palace. The walls were strengthened to 2.5 metres thick and bristled with firing positions. Vytautas died in the castle in 1430 whilst waiting on his royal coronation crown to arrive from Poland.

With the defeat of the Teutonic Order at Grunwald the Trakai castles were no longer so important to the defence of the Duchy but often served the Duke as a palace. When the Russians invaded in 1655-61 the castle was badly damaged and no effort was later made to rebuild it.

Then in the 19th century (when Lithuania as such did not exist – being a part of Russia) an interest in the castle grew and work was begun looking at the original plans. Restoration work was carried out during the Polish, Nazi and Soviet occupations during the 20th Century. Ironically it was under the Soviets that the reconstruction of the castle was carried out. Masons created the same styled red bricks to rebuild the 15th century walls.

It was the most expensive place that I visited in Lithuania costing me Lt14 to get in but I thought it was more than worthwhile. I thought for a moment I was going to be wandering about on my tod but was soon joined by a party of schoolchildren and hells bells – there was a family of Americans there. I can’t go up those stairs ! I shall carry you my beloved ! I don’t think so, they would have given way under the combined weight.

Finding your way about was a rather like a game. Which doors opened to reveal displays and the required Ssssh! Lady who sits in the corner. There is a reasonable collection of artefacts and they are all very well displayed with English translations. In a number of the chambers there were also information cards in English. For about an hour I wandered from room to room, up and down stairs and my only disappointment was the fact that I wasn’t allowed to climb the stairs to the top of the 33m donjon.

The items on display recount the history of the castle and life in the general area. There is just enough to make it interesting without making your brain go numb.

One of the displays shows a large collection of pipes and I have to say that I did not know that the tobacco plant was sent to the Queen of France as a herbal remedy and was thus named after the French Doctor Jean Nicot. The first clay pipes were created in London. And I had to go all the way to Trakai to find that out.