Having left Cathedral Square I began the walk up Gediminas Hill to the castle. A fine mist of rain had begun to fall which left the road a bit slippery and workers were in the process of taking a number of the trees down, leaving muddy tracks and branches scattered about.

Gediminas built his castle and transferred his seat of power from Trakai to Vilnius in 1323 (So twenty years before the Hundred Years War would break out between France and England). A fire burnt down the original structure in 1419 (The battle of Azincourt was 1415) and Vytautas the Great not only rebuilt it but had it fortified.

For over two hundred years the castle prevailed against all enemies. Eventually Lithuania and Poland formally created a Commonwealth which ruled over enormous tracts of territory in eastern Europe including the Ukraine. There, the Cossacks became unhappy with their lot and eventually rebelled under Bohdan Khmelnytsky in 1648.

Khmelnytsky ended up not merely leading a rebellion but a patriotic war of Ukrainian independence – but there was a price to pay. Ukraine was too weak as an entity to survive on its own and was forced to turn to Russia (which promptly incorporated it into greater Russia). That inevitably brought Russia into the war against the Commonwealth.

Vilnius was occupied by the Russians in 1655 and it would be 1661 before it was recaptured. In the intervening years the Russians dismantled most of the upper castle including two of its towers and most of the defensive walls. All that remains is the Western Tower which contains a small museum showing some models of how the town looked. I tried my best in sign-language to convince the lady on the cash desk that I was a junior but she insisted: you old.

Climbing the tower offered a fine view over the town from its roof but by now it was getting really wet as the showers came and went. Gazing out across the landscape I could see the Three Crosses Hill on the far side of the Vilna River and decided that this would be my next port of call.

I started my way from the castle taking a different path towards the river and found that the gate was closed so I had to walk almost all the way back up again and return by the main drive. Following my wee map I found my way to a bridge crossing the Vilna into the bundle of hills that forms Kalnų Park. One of the models in the castle had shown this area as the site of the Crooked Castle with part of the defences on each hill.

Continuing my dander I finally came across a set of wooden steps leading up towards the Three Crosses. The legend says that seven Franciscan monks were killed here in the 14th century by locals and floated down the Neris River so that they could return whence they had come.

Times changed and the locals took up the new religion and a monument was raised in the 17th century to these foreign meddlers turned martyrs. During the Soviet occupation of the country the monument was torn down as the martyrs became irrelevant. The remnants can be seen near the foot of the replacement which was constructed in 1989. 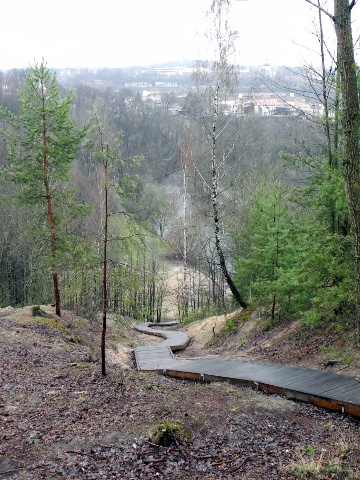 So glad I didn’t have to go back down them

Getting up there was a very long climb (good well constructed steps but an awful lot of them) obliging a couple of pauses, after making sure that nobody was watching my lack of muscle power. It was chucking it down and I managed to take refuge under the trees for a while before dashing out to have a look at the view which consisted of mostly black sky and a curtain of rain. I didn’t like the idea of having climbed so far for no photos but it seemed pointless. Coming down I turned left on the road and found myself at the old Soviet open air theatre which had some shelters which I presumed were for camera or sound crews.

I stood there for a while, pondering the rain and the fact that people were driving up to the barrier and then walking the three hundred metres to the monument – not a wooden step in sight. Ah ! But I had all that good exercise and was now ready to enter the World Knee Trembling Championships.

The rain eased and I decided to go back up and make another attempt to take some photos. It was still dark but I could at least see where I was pointing the camera. After that I decided to go walkabout over the remaining hills. That meant walking down my wooden steps and back up some others to the top of the next hill where I found – two people drinking beer.

The last of the main hills is where Gediminas is reputed to be buried and a popular pagan site. I use the word reputed under caution here because although it appears on the maps there appears to be no historical basis for the assertion. All we know is that he was cremated in full pagan style together with his favourite servant and a few slaves who had all been in the finest of health just prior to being thrown on the pyre.

Having had enough of hills I decided to walk out on to the main road, get my bearings and return to the town.

Vilnius used to have such a large Jewish population that it was known as the Jerusalem of the north and reminders of that heritage can still be found scattered over the town. Almost the entire Jewish population was wiped out during the Nazi occupation.

Not all of the excesses were left to the Nazis though and the Soviets had the Užupis Old Jewish Cemetery ripped up and the headstones used as building material. A few of the stones have been recovered and form a memorial wall marking the site.

Continuing on my way I arrived on a street named after Tadas Kosciuška who would be better known to Australians as Kościuszko, a Lithuanian-Polish patriot who fought with the Americans in their War of Independence and then in his home country against the Russians and Prussians. Australia’s highest mountain is named after him (and I have been on it many moons ago which is why the name had stuck).

That brought me alongside the Neris River and back down to the New Arsenal which houses the Lithuanian National Museum. Now, my intention had been to walk around as much as possible and then go and visit a museum or two so as to dry out if necessary and then kill some time until Vytautas finished work at 1930 hours.

Problem was that it was only now that I noticed that almost everything was closed on Mondays and Tuesdays. I had been lucky with the Castle which forms part of the complex. 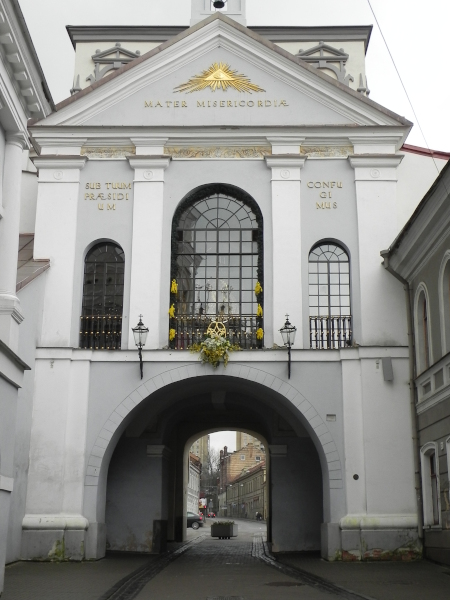 Aušros Vartai — The Gates of Dawn

Oh well, I needed to go to the railway station to check on getting to the airport so I made my way back to the Town Hall and then on up the narrow street towards the Gates of Dawn (Aušros Vartai) which are the only original gates to the city.

Typically the gates were surmounted by an Icon of the Virgin Mary in order to protect the city. The current painting was created on oak in 1630 and is embellished in gold. It can be seen from the street passing underneath but all my shots suffered from too much reflection.

The shrine is itself an emblem of Vilnius and is so important to its culture; revered by Catholic and Orthodox alike, that it was one of the few religious locations left untouched during the Soviet occupation.

The outer wall is nowhere near as elegant and could easily be missed if it were not for the heraldic knight at the summit. He is now known as the Vytis and has been the national coat of arms since at least the 14th Century. A popular symbol on souvenirs he graces my beer mug (no big surprise that with limited space and baggage allowance I chose a beer mug to bring home for me).

A bit further up the road and I found the Stotis (railway station). Armed with my memory that Oro Uostas means Airport I checked the times and then the platform. A rather flash single red carriage train provides the service and it was being announced in both English and Russian. No problems for Wednesday then.

Where could I go next ? No more hills. That was a given requirement. I had definitely had my fill of clambering up and down for one day.

So, I took myself further along the Neris River towards what is known as the Green Bridge.

Evaldas had mentioned that in summer between the Arsenal and the bridge the flowers form the phrase : Aš tave myliu (I love you) on one side of the river and : Ir aš tave (I do too) on the other. In early spring you can certainly make out the letter forms but I’ll have to go back and get the flowers. 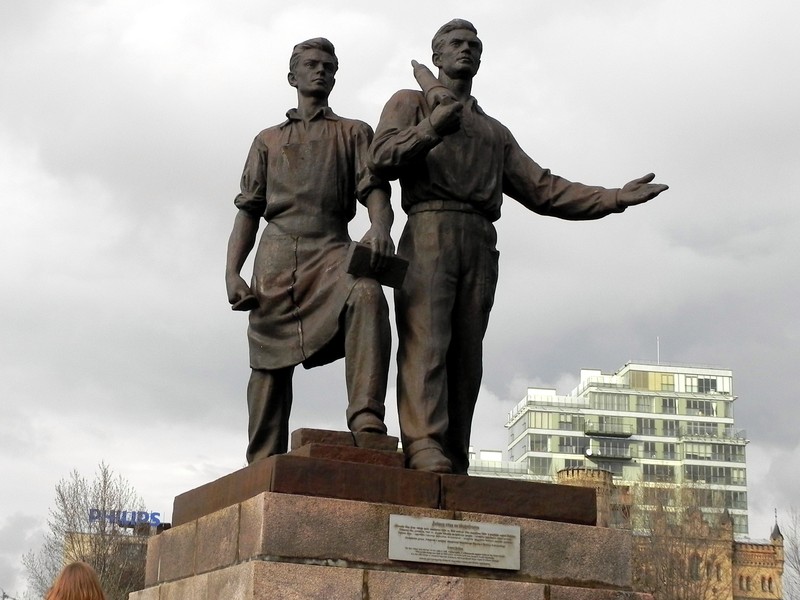 I had already crossed the Green Bridge a couple of times in the car and seen its Soviet Socialist Realist statues of heroic soldiers and farm labourers ready to do battle against counter-revolutionaries and weeds.

Up close you can see that the statues are in a poor state of repair. There seems to be a contradiction in the literature and the reality as to what is happening about them. Officially the line seems to be that they represent part of Lithuania’s Soviet heritage, but as it is is Soviet they are not going to maintain it. They also won’t let the Russians repair them either.

They are certainly far more interesting than the piece of contemporary art which hangs underneath entitled: The Great Chain. More of a 404 Error (Broken Link) if you ask me.

Across the river was a rather fabulous looking yellow brick building with a turret. A bit of digging has revealed that this is the former Raduškevičius mansion and now houses the Lithuanian Architects’ Union.

It now started to pour with rain again so I came back down to the Cathedral Square where Vytautas and I had agreed to meet and found myself a bus stop that didn’t leak.

That evening we eat in a pancake house. Hot potato pancakes filled with spinach followed by an ordinary pancake filled with cottage cheese and apricots. Can’t argue with fare such as that. Still giving the boiled pig’s ears a miss you notice.

Tomorrow the weather was looking dryer so it was suggested that I take the train to Trakai and its island castle.