It could be wetter than you like it, sir

Despite the warm sunny day we had experienced on the coast the weather forecast for Monday was grey and wet; verging towards Very Wet.

Vytautas was back to work at the airport preparing for a meal and menu presentation to SAS (Who Fly and Eat as opposed to Win). He had left very early in the morning but not before having left me with instructions as to how to lock the flat up; find my way to the road; catch a trolleybus; get a ticket and stamp it; where to get off in town and most importantly: how to get back again if I was getting too drowned.

I got up and made breakfast watching the traffic from the 17th floor. No point in leaving too early because I could see that the roads were jammed. About 0900 hours though they began to clear and I set out. First stop was the local supermarket for a loaf of bread and a bottle of Vytautas spring water (I actually like the taste despite the fact that it is a bit salty).

Armed with my 2.5 Letas I boarded my No 7 Trolleybus. I paid the driver who was quite disgusted that somebody was inconveniencing him and pulled away from the stop long before he worried about giving me my ticket. I then looked for the validation machine. Large yellow thing with a touch screen looked promising apart from the fact that it wasn’t going to work with what I had just been given. It took me a moment to notice that just above it was a state of the art (for the previous century) ticket punch. The sort of thing that London Bus Conductors used to have only this was screwed to the post. 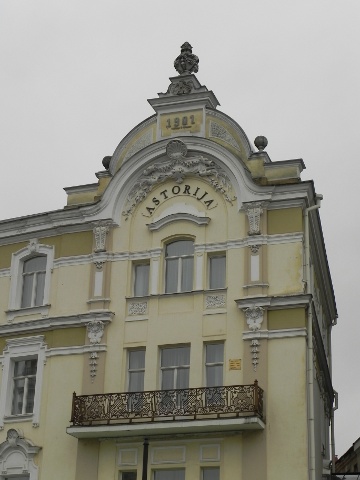 Ticket punched I stood back to enjoy the ride. I was slowly getting my bearings and the Trolleybus had good maps of all the stops and the network and announced itself at each stop. Of course it helps if you can match the spoken names to how you are reading them. I was a bit confused because I had picked up that gatvė meant street so that was easy to follow when robo-lady announced something gatvė. But there were others that although I was getting the name of what I thought was the street the second word was not right.

Two more days of experience and I had learnt that stotelė means, in this instance: bus stop. I had been getting confused because it sounded like the word stotis which means : Station (and the end of the line for the No 7).

I managed to get off at the correct stop and set off on foot to explore. It was grey but it wasn’t raining – yet. The town is a maze of wee streets branching off from the main arterial routes, some are pedestrianised and others as I have already indicated are a combat ring for the two footed against the four wheeled. On the broad avenues you soon note that everybody sticks to the pedestrian crossings with their run and run faster signals.

I found my way down to Vilnius Town Hall (which is Rotušė in Lithuanian so not far off Rathaus in German). The building in one form or another has stood here since Vilnius received its City charter in 1387. The classical form with its six doric columns was built in the late 18th century and the building has in the course of the ebb and flow of invaders has been used as a theatre and art gallery.

Having now got my bearings I set off towards the cathedral. There are as many churches in this town as there are shoe shops on a British high street. As it was Monday almost everything touristy was shut and that seemed to include some of the churches. It was certainly the case with the rather pretty St Nicholas Russian Orthodox church. On my last day I did get inside, but there are very strict rules. No photos and men are not allowed in if wearing shorts and underwear ! And if you are wearing neither ? 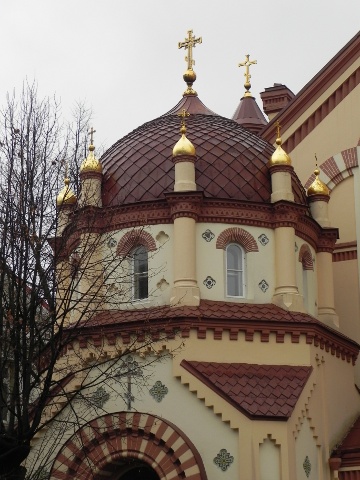 The centre of Vilnius is completely dominated by the Cathedral Basilica of St Stanislav and St Vladislav the most important Catholic edifice in the country. Remembering that Lithuania was the last of the European countries to shed its pagan origins it is almost certain that when Mindaugas was baptised in 1251 he built his first church on the site of a pagan shrine.

Mindaugas was the only person to be crowned King of Lithuania (all the others were Grand Dukes). He was the man that negotiated away Memel to the Teutonic Orders and it is argued that his acceptance of the new religion was all for political clout as his own supposed change in faith had little to no effect on the rest of the population.

It is hardly surprising that with such a tumultuous history that the cathedral has been burned down numerous times and was turned into a museum of atheism by the Soviets. The interior was a bit of a shock as it is all plastered, not a Gothic block of hewn stone to be seen. The walls have numerous paintings on them but the word impressive does not spring to mind.

Then you enter the baroque St Casimir’s chapel and you can not only get the word impressive back out again but give it a good dusting down and a polish.

It was designed by Italian architects in the early 17th century and contains the sarcophagus of Lithuania’s patron saint in a setting of red, black and white marble surrounded by sculptures of important figures from Lithuanian and Polish history.

Casimir was the son of Polish King and Lithuanian Grand Duke Casimir IV. For a short time prior to his death and whilst his father ruled in Vilnius the younger Casimir acted as vice regent in Krakow. A deeply pious young man, he refused to marry, wore a hair shirt, slept on the floor and his fasting eventually killed him.

It is said that when they opened his coffin 120 years later, to transfer it into that which you see before you, his corpse had not decayed. Amongst its many miracles the coffin is reputed to be able to raise the dead.

Immediately in front of the cathedral is the 57 metre bell tower which has been added to over the centuries giving it quite an odd shape – round in some places and square in others. On the square are two statues, one, in front of the New Arsenal which now houses the Lithuanian National Museum, is to King Mindaugas and the other to the right of the Basilica is to Grand Duke Gediminas, the man who built Vilnius.

Although Mindaugas is now considered the founder of the nation, for centuries he was pretty much sidelined by other personalities (being assassinated for his devious dealings hadn’t helped his popularity). Gediminas on the other hand was ever revered and commemorated by Gediminas Hill, on which sits the ruins of his castle, and Gediminas Prospect (Avenue) the main thoroughfare of the town (you can tell because there is a Marks and Spencer on it). 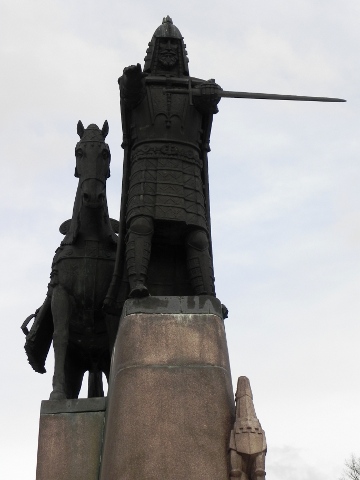 Legend has it that whilst out hunting in 1323 along the banks of the Neris River Gediminas took a pause and whilst resting dreamt that a huge wolf howling like a pack of a hundred appeared before him. His pagan priest explained that this was a prophetic sign that he should build a castle alongside the Vilnia tributary and that the stronghold would bring glory to the country.

The castle and town were named after the river and for a long time was known simply as Vilna in English. At the time of his lunchtime snooze the Lithuanian capital was still in Trakai not far away to the west. I did get there but that will be another story.

For the moment I had to climb up the hill to the remains of the castle. It was the first of a number of long climbs in the rain that day.