Following my ULM flight in the early afternoon I was taken off to visit the most important seaside resort in the country. It might be a wee bit unfair to suggest that with such a short coast line that there isn’t a great deal of room for rival towns.

The town of Palanga would remind you of any similar town. At this time of the year it was comparatively quiet but there was still a sizeable crowd walking about and dandering out onto the pier.

The main street down to the beach is pedestrianised, very wide and incredibly clean and tidy. I’ll probably say it again but I admit to being constantly impressed by just how clean Lithuania’s towns are. Too much graffiti I’ll grant but very little in the way of litter and as it seemed to me that the vast majority of people do not smoke a marked lack of fag butts lying in gutters.

There were plenty of stalls open offering snacks and hot coffee and the mini-buzz on the main street may have been the result of it being little Easter as Vytautas translated it. I think he meant Low Sunday as the following day was the Sunday after the Easter weekend.

The day is also known as Quasimodo Sunday, which explains the name of the Hunchback of Notre Dame who as a baby was abandoned on that day.

All down the street were huge Easter eggs and Lithuanians spend a lot of time at home painting hard boiled eggs to celebrate Easter. I noted families having more for breakfast the following morning at the hotel.

Apart from the tidiness of the towns the other thing that had struck me in my first twenty-four hours was the serious lack of vomiting banks. It was starting to be embarrassing that I had no local money. Lithuania may be part of the European Union but they still employ their own currency: The Leta (about three to the Euro by the time you have paid your charges).

At the far end of the main street we reached the beach and the pier built by Józef Tyszkiewicz (I only add these names to give your brain some extra work) at the end of the 19th Century. He intended it to be used as a mooring area for ferries but since its construction it has been a popular spot for a stroll.

It goes right out over the towns famous beach and the first thing that caught my eye was what I seriously thought was a Soviet gas pipeline coming down the beach. That I would have no idea where said gas would be coming from was of no consequence because I was quite prepared to believe that it was something that the Soviets would have done in somebody else’s country.

But no ! A ship out at sea was signalled to me and Evaldas (who is remarkably learned when it comes his country’s history) explained that because of the heavy tides and rough seas the beach loses much of its sand during the winter. So, before the new season sand is dredged up from off shore and pumped back onto land. Le voila ! A replenished beach.

A little further on we could see the bulldozers at work smoothing the discharged sand out across the beach. Further along the walkway we came to the inevitable fishermen that can be found on all piers across the globe. Rods hanging over the side, whilst they chat with others. Rarely a fish caught I am sure but then catching fish is not what fishing is all about. Fishing is about tranquillity, a good book, relaxing under cover in the pouring rain and a good dose of getting away from the world. And sometimes you catch dinner.

Out on the pier Evaldas took over the camera and within a few moments had gone through at least half a memory card. Why take one photo when you can take a dozen. I got lots to chose from. Too fat, not flattering, looking grumpy, WAY too serious, I have a post up my nose ! Who put that bin there? is it possible to stand like that without defying gravity ? 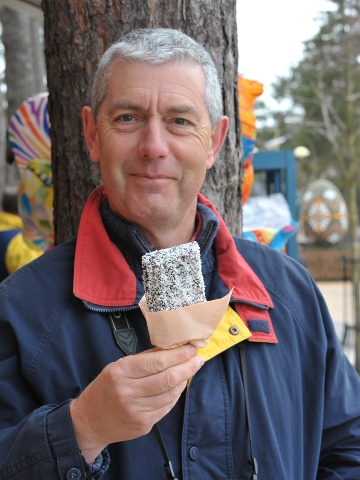 But there were a few I liked enough to share.

We walked back up into the town stopping for something that I consider a fabulous idea — how come the Belgians haven’t thought this one up. Waffles on a stick. You get your waffle cooked and it is then dipped firstly in chocolate and then in a coating of your choice. No doubt there are sufficient calories to keep a brickie working for an afternoon — but I was on holiday.