2020 gave us a fabulous summer but this year has been pretty wet and miserable. The days that it has been hot and sunny have been very windy. Trips to the beach have been put aside because there is so little fun in getting sand-blasted.

If nothing else the forced exposure to the garden has prompted me to really tackle the back hedge and the lack of tree foliage has made it much brighter.

On my runs to the pool in Boulogne I pass through the town of Samer, once famous for the quality of its pens and now home to a very large Bic factory. Over the years a large complex of buildings at the bottom of the town has been renovated and this now form the Boulonnais Horse Centre. 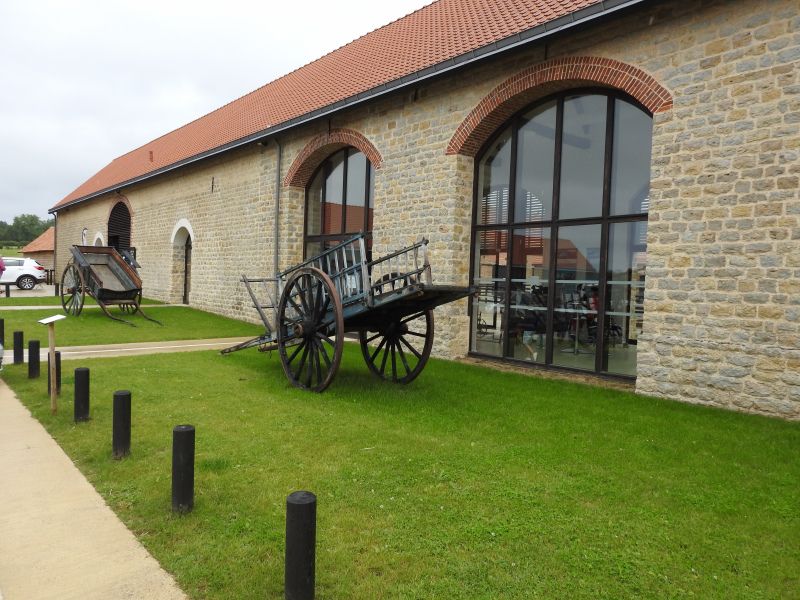 The buildings are really lovely

I know nothing about horses, am not particularly interested in horses but this particular breed is part of our coastal heritage. They used to pull the boats ashore ; work the land ; transport the fish to market in Paris — the route du poisson.

I had noticed, driving past, that they were holding a number of open days and felt sure that one of them would fit in with a Tuesday or Friday when I was passing. And it rained, and then rained on the next run as well. I eventually decided to bite the bullet and just go whilst hoping for the best. I left a couple of weeks which would allow for a second visit if the weather improved. It never did and I felt sorry for the riders and staff who were making such an effort in the face of such miserable weather. 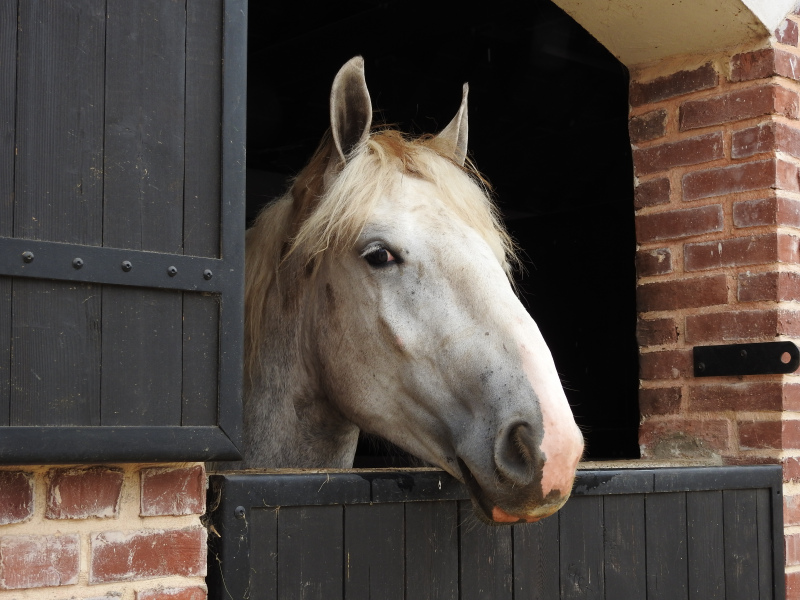 I really love the buildings with their pale yellow brickwork, red tiled roofs and splashes of green lawn in front. Parking was not a problem as I was really early and there is plenty of space anyway. Mask sorted and my phone fully charged with all my vaccination certificates ready and present. You weren’t getting in without them.

The French Tousanticovid app on our portable phones allows us not only to be alerted in case of a proximity contact but also to store our Covid related certificates as well as scan the QR codes of restaurants etc.

In the face of a certain, not so much hesitancy to get vaccinated, but more I’ll do it after the holidays mood amongst the population, President Macron came up with the perfect incitement to get on and get vaccinated. If you wanted to have a coffee, go out for a meal, get into a cinema or visit a museum etc (including equestrian centres) you would need to prove you were either fully vaccinated or had recently been tested negative.

There was a lot of outrage at the idea and we had parades and all sorts of events against the idea. Meanwhile, millions got themselves vaccinated. 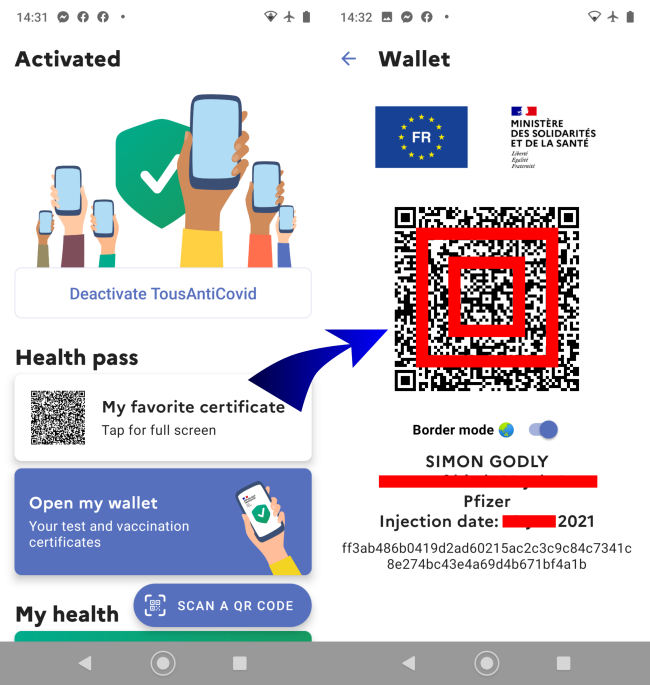 The tests were actually free but the warning was on the cards — the State would not continue to pay for tests that were being used for leisure purposes.

I never fully understood the rage against the pass (which it was finally decided was indeed spelled without the final e). If you were vaccinated you just scanned your QR code and there it was on the app. Likewise if you had a negative test. Or of course you could carry the paperwork around. It wasn’t something that was difficult to obtain or required forms to be completed. It was automatic. So, despite what they argued about it not being an anti-vax thing the only people who didn’t have the pass were those that refused to get vaccinated OR tested. 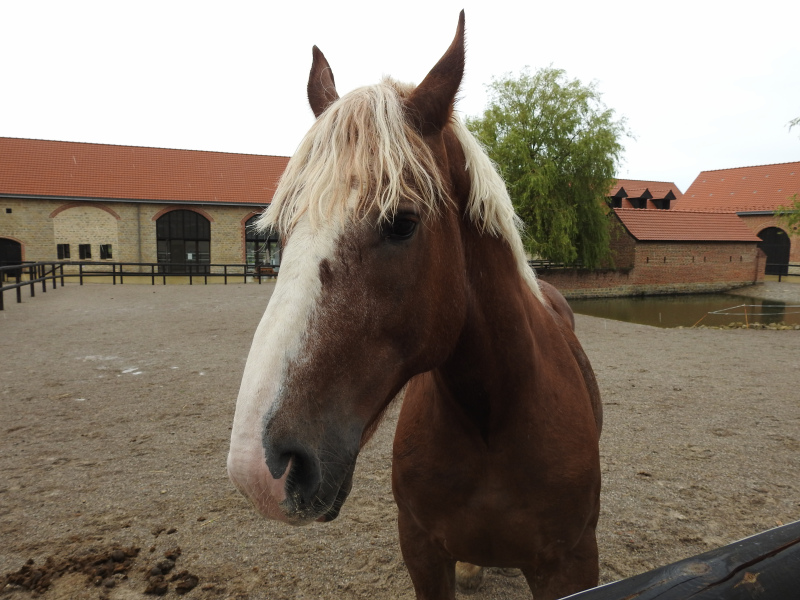 It is hard to believe that in this day and age something as banal as a race of horses could be at risk of extinction and yet, here we are.

Of the nine French races of work horses the Boulonnais is classed as sixth in size. With only a couple of hundred stables there are now only about two hundred breeding mares and under a hundred stallions. For that reason breeding between Arab and Boulonnais is being allowed in an effort to increase the size of the breeding market.

If at two years-old a cross-breed shows all the necessary traits of being a Boulonnais it is declared as such on its stud-book.

Known locally as the pure-blooded work horse or more exotically the white marbled colossus the Boulonnais dates back centuries. The local legend says back to Roman cavalry but the reality is that it is more likely to be something less heroic and more to do with the local conditions and the work it was put to.

There are two different sized breeds of the Boulonnais. The larger horse was adept at working the beet fields whilst the Mareyeur (a word meaning fishmonger) was a lighter horse ; sturdy and rapid, ideal for transporting fish to markets or pulling coaches.

Originally the horse tended towards black or bay but the desire to use the lighter horse for transporting fish to the Parisian markets — often done at night — pushed selection more towards the grey which I’ve always considered the dominant colour.

One thing that marks them out as belonging to the northern coast is the fact that they all have an anchor brand on the left side of their neck.

The object of the centre is to train horses not just for competition but also to show off their advantages for modern day agriculture. They are still used for logging as they cause far less destruction to the forest than a tractor and trailer. Some vineyards are going back to using horses as well.

I spent a good couple of hours on the site but it was so sad that it just poured with rain. The teams went out and did their displays in the paddock but it is really difficult to summon up the enthusiasm to ask the poor old horses to do another lap at the gallop when you are getting quietly soaked to the skin.

Afterwards I went out on the coach around the fields. An informative drive which explained much of the history of the horse as well as why our driver had taken up owning them. There’s good money to be had in horse drawn wedding carriages and the wagon we were in was equipped to allow for picnics whilst touring the countryside on an afternoon jaunt. On top of that he said — it was fun.