It came as no surprise when on 6th January Jean Castex told us that the confinement would be prolonged and that our curfew was dropped to 1800 hours. To be honest, in mid winter I was hardly affected.

The day before I had been to the dentist for the first of three visits to get a crown put in. Gone are the days of biting on plasticine. It was all done by a 3D scanner and two weeks later I was all fitted out with a new crown. The downside was that on working on that tooth he had noticed a swelling on the lower gum. I had been aware of it but thought it was just a reaction to something getting caught between my teeth. A couple of radios later and he asked me when I had had the tooth filled. The answer to that was, heaven knows but at least twenty odd years ago. It is easy to forget that I’m in France eighteen years and sometimes, what seems like yesterday is now decades back.

More dental bookings needed because the root of the tooth was infected.

In the background to all of this Brexit had happened on New Year’s day to the great flying of flags across England and the singing of Land of Hope and Glory and all that. The British Prime Minister had done a great deal with the European Union and Britain would prosper mightily.

It would all be calm for a few weeks until British exporters and even importers were suddenly faced with checks and controls to get into France. Covid would also play a part when President Macron all but shut the border as cases hurtled out of control in England.

Late on the evening of the 6th January I was surprised by messages from Jason asking about his brother Jimmy, the now sole occupant of the family home at number 8. “Had I seen him recently ? ”

He had been round very late on the Monday night complaining about one of his so called mates looking him to go out on late night foraging jobs. The guy dumps stuff on Jimmy and I am quite certain that it is all stolen, but for all his talk Jimmy just takes it in because — well, it looks fancy and makes a noise.

Since then I hadn’t seen him but I popped out the back and Jimmy’s kitchen light was on so I could only presume he was there. It is not as though he has a door bell and as reception is rubbish I can’t even message.

There was a rumour Jason informed me that a body had been found out on the side of the road towards Labroye. It was being suggested that it was Jimmy. I thought that this would be a bit strange as there was a curfew and Jimmy, up until now had been very strict about observing most things about the Covid regulations. Besides, as his mobylette had broken down weeks ago, how would he have got that far out on foot ?

Next thing I had the other brothers, Johnny and Jean-Jacques, asking exactly the same question : had I seen Jimmy recently ?

By the following morning it had been confirmed that the body was indeed Jimmy. He had been run over — multiple times and left for dead. The body had been spotted by the school bus and had been identified via his fingerprints. Arrests had been made and a murder investigation had been started by the Gendarmerie in Lille. Why Lille as opposed to Amiens ? Because the body had been found outside the Somme in the Pas de Calais.

A few days later I noted that all of Jimmy’s animals and birds had been removed by the SPA. No more Jimmy’s goat to eat all the left overs and peelings ! He had the very grand name of Balthazar. Gone as well was his wee dog, Moka, that used to be followed everywhere by one of the geese. The garden suddenly seemed very empty. 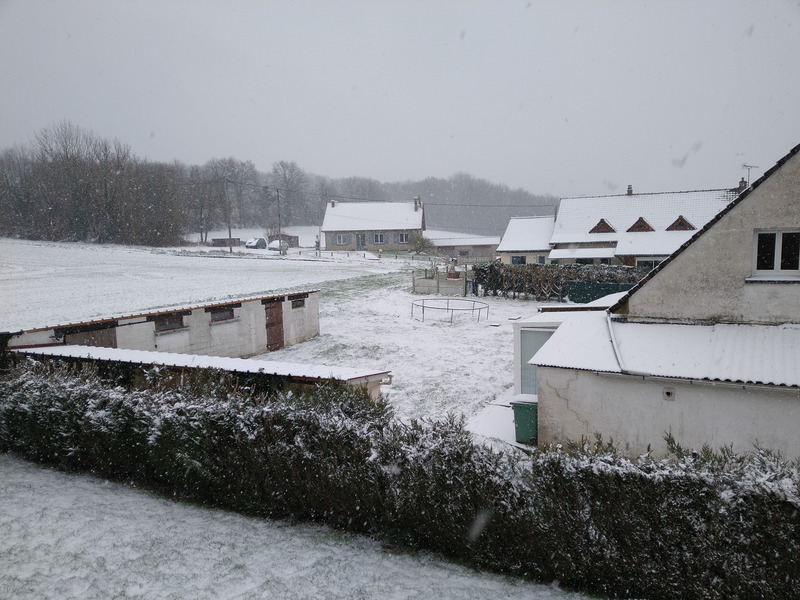 It got wet. The river Authie was almost up and over it’s depth marker at Ponches.

To top off all the downhearted news it snowed.