Big week in front of me, lots of driving to do so I put new front tyres on the car and got her serviced. The result of that was that the turbo was not in great shape and whilst it was unlikely to explode on me, one can never tell with these things. Change of car needed. Thankfully they had a second-hand C4 Picasso out the front that was within my price range. Done. 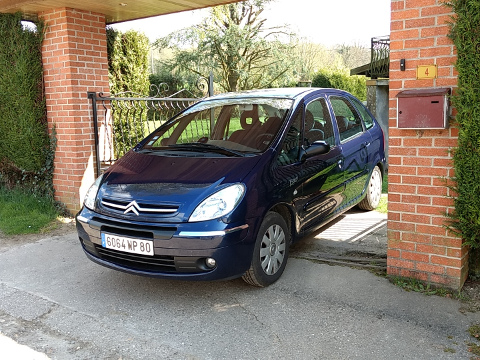 Off to the vet’s for the last time

Late Saturday morning the finances were agreed, Monday afternoon the old car left the house for the last time. With 364,000 kilometres on the clock it would be hard to complain but repairing a car that has no value (apart from the new front tyres) was pointless. Out with the blue Picasso and in with a coffee coloured one. 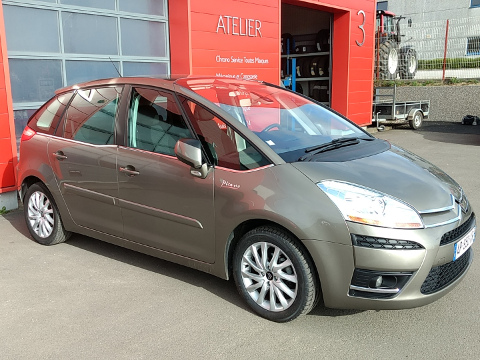 Tuesday morning I set out for Brussel Airport to collect John and Jean to begin a week of commemorations in connection with the Hundredth Anniversary of the Battle of Arras. There were a few things different between the cars and I had not had much time to go through the manual for the twiddly things — how do you fold the rear seats flat ! — but the basics were straightforward apart from the lack of a handbrake. It has taken me a wee while to get the hang of the idea that I have a switch on the dashboard to pull.

Get to the airport and my two Canadians arrive — with two trolleys piled high with luggage and I already have my own suitcase and bits in the boot. The great thing about the Picasso is that there is a lot of room and you can play with the seats as the mood suits. Putting two down (I read the manual) we just about managed to squeeze everything in.

Off to Ieper where I deposited them at the entrance to the Novotel with the luggage whilst I went around the block to park the car. Got back to find that the space had been taken and Jean waving me down. The hotel had double booked us and we had been bumped to another around the corner. John was not a happy teddy and was on the phone to American Express in Canada within minutes.

It was now gone nine in the evening and I started to transport the luggage around the corner a few cases at a time because I couldn’t be bothered to reorganise the car again. I am sure that there were people in the bar on the corner who must have been thinking : that car keeps driving past every few minutes. After a lot of ranting and raving from John on the phone (which was not changing anything at all) we got the luggage sorted out into our rooms. Jean had organised food at the Novotel and we eat pretty well, better yet, they had to pay for it.

The following day we were up early and were joined by John (II) and Jan who came out with us on our run around the Ieper battlefields. The Welsh Dragon at Langemarck has a lawn around it at last and the daffodils were out. Our main event was at St George’s Memorial Church in the early evening where we were going to hold a short commemoration for those from the First Nations of Canada who served during the Great War. 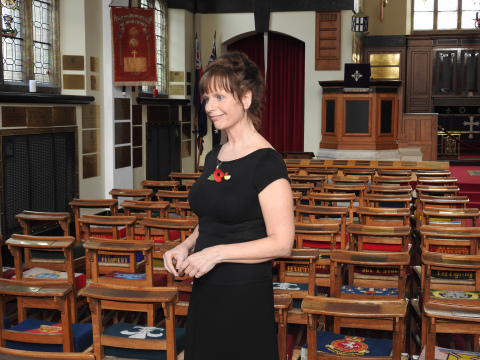 The church is interesting with a large collection of regimental plaques and embroidered kneelers. John (I) Is now associated with the Canadian Rangers who are made up of reservists from the native peoples and operate right across the north of Canada.

Jean sang one of her songs. She signs as she sings which adds a rather charming grace to the songs. We were joined by the church’s chaplain Father Peter Wright who had only taken up his post a few days beforehand. Flanders must seem a long way from his home in sunny California.

The following day we all moved down to Lille. The original plan had been to battlefield and then hotel in order to avoid the traffic in Lille. After the drama in Ieper John insisted, quite rightly, that we reverse our itinerary.

The others were easy but my hotel was the fun bit because there are three Novotels in Lille and none of them turned out to be mine. I was in the Novotel Suites next to the Eurostar Station. Back to the main group and we began a tour of the battlefields in the area out towards Fromelles and Festubert. We had not had time to eat so that became a bit of a priority. In driving around we came across : “Pain et Tradition” at Erquinghem-Lys. They had some mini fougasses topped with all sorts of things and cream buns with raspberries amongst the things we could handle without making a serious mess. Very reasonable prices and the bar next door let us eat at our tables. 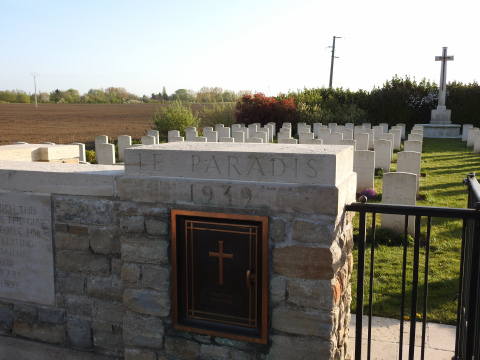 On the way back we stopped at Le Paradis War Cemetery. Scene of a massacre of British soldiers captured by the SS in 1940

By now the ladies had overdosed on dead people and wanted to spend a day shopping in Lille. They thus missed out on a visit to the aerodrome for a chat with the Vimy Flight team and their recreated WW1 flying machines. Their own planes had been flown over in the back of an RCAF transporter and had since been joined by a Luxembourger who flew his two full sized machines over for the fun of it (Before you ask, I presume he had a fellow pilot with him for the second).

In the evening I had to meet Robert Lindsay who was flying in from Belfast for the opening of the new Vimy Visitors’ Centre. His namesake and great uncle was killed at Vimy with the 15th Battalion Canadian Infantry and has his name marked on the regimental Vimy Cross. CBC had been able to interview the three Canadian relatives that we had found and Robert was to be interviewed by the same team with whom I had taken the cross out onto the battlefield back in February.

Has to be said that I was a bit unsure of what I was letting myself into in offering to share the hotel room with him but he turns out to be a really nice guy. I had by now realised that it was quicker to walk between the two hotels than to drive. Central Lille being just a bit of a nightmare, made worse by the security in place for the high ranking Canadians staying in the same hotel as the rest of my lot.

That evening we went out to a restaurant famous for its cheese fondu. I managed to persuade three of the others to go for the Ch’ti Fondu which consisted of a blend of some fairly strong northern cheeses — included the dreaded Maroilles which is never for the fainthearted when uncooked.

Robert cycles hundreds of kilometres every month so I would reckon that he’ll have worked it off a lot faster than the rest of us. It was very good, I am just not quite convinced that I really needed an entire pot of melted cheese on an assortment of meats and veggies. Thank you the person who invented elastic !

Morning came soon enough and commenced a very hectic two days. Last May I had assisted the Essex Regiments in unveiling a plaque at Monchy le Preux just to the east of Arras. I must have done something right because the Yeomanry asked me to officiate at their centenary commemoration on the 8th April. That all went very well with about three hundred or so people attending including a platoon of serving members. We were well looked after by the town who put on a spread of nibbles, beer and wine. I did the talking Robert, took the photos.