Big day today. Presidential palace in the morning and then I have to pick up the car in the afternoon.

Down the hill we wandered only to find that we were far too early. The troops had arrived but after a quick inspection up a side street they all dandered off for tea and wads before their duty. 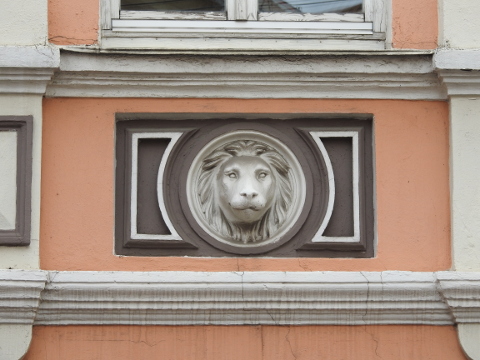 Taking this as our cue, we also went for a wander around the block before coming back to sit on the side with a few other early birds. It strikes me as odd that tourist groups would pass through five or ten minutes before the ceremony without stopping to watch. That’s like walking past the Houses of Parliament at two minutes to the hour without waiting the extra couple of minutes to hear Big Ben.

Along came the soldiers, the flag poles were unlocked, and the change of flags began. This time it wasn’t new to us so we were able to be a little more attentive to detail. The Air Force had problems with their flag; the corner just didn’t want to play, but the drummer just kept on tapping until they had caught up. I managed to miss a few good shots because just as I was about to take them, this guy would hold up his I-pad in front of me. I would move — he would move. I try to be reasonable with folks, I do not deliberately stand or walk in front of people with a camera. I am quite tall so am prepared to allow shorter people to stand in front of me but it gets right on my nerves when people insist on jumping the line and walking in front of everybody else. Cameras should come with a built in Taser to clear the view between you and the subject matter !

The ceremony over, we went back to the apartment and I sorted out all the paperwork for the car. I had arranged to collect it at the station but had not spotted an office in our two outings in that direction. Anyway, off I goes. I get there early and walk around the given address but none of the shop fronts suggest a car-hire agency. Time to phone. Ah ! They have been phoning me. I phone them back. Hello, yes we are here in the car park. Which one ? There are at least three in my field of vision. Where are you ? In front of the bus station. Then walk up towards the railway station. I am with a white Jetta. Good thing he said a white one, because my knowledge of vehicles goes as far as : green makes it a Landrover and if it’s blue it’s an Ulsterbus. 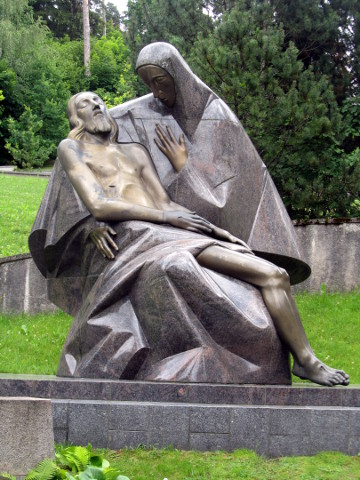 The car was shiny, spotless. I joked that it was a lot cleaner than my car and he told me very solemnly that they expected it back in the same condition. Shouldn’t be a problem because there are no cows or farmer’s tractors in Lithuania.

Now to get back to the garage at the apartment. The roads in Vilnius are terrible. Sunken, rutted and cobbled with projecting manhole covers everywhere let alone huge holes dotted about to add to the excitement of the journey. Then you have the Lithuanian drivers who obviously believe themselves the equal of any Belgian. In a word : Bonkers !

That said, the traffic was much lighter than I expected. Got the car parked up and collected my parents. Let’s go visit dead people. It’s been a whole week since I saw a cemetery !

One of the first places that Vytautas took me on my first visit was Antakalnis cemetery on the outskirts of the town. It is an amazing place set upon a wooded hillside. There are numerous military sections going back to both world wars and Lithuania’s various struggles against Germans, Poles and Soviets. Within is also the mass grave of the remnants of Napoleon’s Army after its retreat from Moscow in 1812.

Apart from all that, this is a monumental mason’s paradise. A veritable showcase of what can be achieved with a bit of imagination. Even without having a clue as to who these people were, the designs hinted at previous professions or life long hobbies.

Many must have cost a fortune and some had that weird French touch of having your name engraved up on the slab before you are dead.

Having finished our walk the sun had sort of given up and my plans to visit the Television Tower came to nought. We made the journey if for nothing else than to give me some practice with the car and the roads, but by the time we had arrived the clouds had closed in.

This evening we were off to get that apple pie that Gabrielle had talked about. We agreed that we would go down and eat and then Gabrielle would join us for this fabled desert. The walk down through the park was trickier than we had reckoned because part of the steps were being refurbished and we were left with just the slope, which is just steep enough. 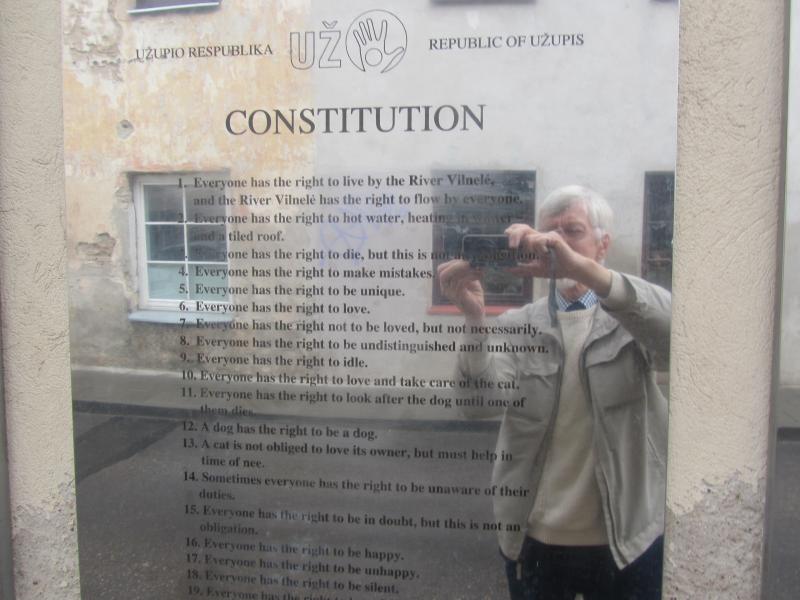 Rather than head straight to the Užupio Kavinė restaurant we walked across one of the other bridges that would bring us through the village. The enclave (whose name means the other side of the river and could well apply to my own hamlet) declared itself independent on 1st April 1997 and on a wall can be found, in many a language, its constitution. Amongst them :

A little further is the Angel of Užupis and that brought us back to the river and our restaurant. There is a statue of a mermaid on the river bank or at least that was how I had read the map. In fact she is more in the bank.

Under the bridge is a swing and at least one daring lady had made her way across the stepping stones to be photographed by her partner. The setting is very pretty but was just a tad too cold for sitting outside and we seated ourselves within. The lassie came across with the menus and we made our order. The rice came with grated carrot on top which turned out to be an interesting idea for future meals back at home. All was going well.

The main courses were excellent and once the plates had been cleared away we were asked if we would like desert ? Not for the moment thank you, because we were waiting on a friend to join us, but once she arrived, it would be four slices of the apple pie please. Sorry, we don’t have any left.

At that very moment Gabrielle joined us and I explained the situation. What do you mean there isn’t any left ? This place is famous for its apple pie, it is even called magical apple pie. Can’t youse just conjure up another one ?

Sadly, no they couldn’t. It had been a busy afternoon and there had been a run on all things magical. Oh well, mother and I would just have to make do with peanut brittle gateau. It was good, but just not apple pie. Never mind. There would always be another time. We had another good evening with Gabrielle who listened to our tales of waiting on the hill for the event that didn’t and our fun on the roads avoiding the trolley buses and pot holes.

All four of us were heading to Kaunas the following morning. Us to visit the town and Gabrielle to say hello to her mother before setting off for the green pastures of Ireland. We walked back up to the town hall and made our good byes and Gabrielle cycled off into the west. Mother and I retired to a glass of Žagarės, one of Gabrielle’s ideas for something that we might like to try. Such a good judge of character so she is, so much better than Cherry Heering.

Part 6. Kaunas and birthday boy
Part 4. The ghetto and back to the railway station