The ghetto and back to the railway station

The morning did indeed turn out to be a bit of a wet one. A shower here and a shower there but nothing like the downpour we had witnessed yesterday at the railway station.

At our end of the town were the two Jewish ghettos and their presence is marked by a number of plaques and statues in the area. There are obviously a few still left in the town because last night whilst waiting upon Gabrielle a car pulled up alongside me and a very bearded gentleman, wound the window down and asked : “Are you Jewish ?”. The reply back home would be : do you mean Jewish Catholic or Jewish Protestant ?

Lithuania handed over almost the totality of its Jews to the Germans during the Nazi occupation and bar a few, all perished. There are no doubt many reasons for this, but just as some blamed Jews for the failure of Germany, many blamed Jews for the recent Soviet occupation of Lithuania. That parts of Lithuania had previously formed part of Germany and had welcomed their liberators, greatly aided the administration of the final solution as well.

Once upon a time Vilnius was a thriving and important centre of study for Jews earning it the name Jerusalem of the North. Almost all of it gone. Bob Dylan’s grandparents were Lithuanian Jews and the celebrated violinist Jascha Heifetz was born in the town. On my first visit I went to one of the town’s Jewish cemeteries, and recent work out in Paneriai forest has brought to light how some of those required to dig the burial pits managed to tunnel out to freedom.

Perhaps because I have already done Kraków and Auschwitz I am wee bit jaded by the museums and memorials. I have to say, for my own part, that for a group of people that suffered so much (and constantly remind the rest of us about it), once given territory and power it has been the two fingered salute to the United Nations ever since.

Anyway, back to Vilnius on a wet morning as we wandered the back streets. At the entrance to the quarter I heard my first French since we left the Boy Scouts at the airport. A guide was taking a group around — follow the parapluie vert everybody. 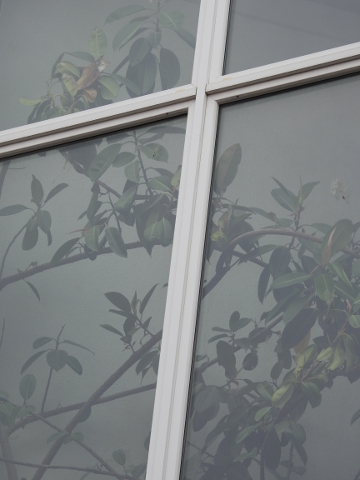 Ultimately the liquidation of what was once a thriving community was so complete that the streets are picturesque (or would be in better weather) but the statues here and there to prominent figures such as Tsemakh Shabad who played a central role in health care, education and public affairs are as historical (He died in 1935) as that to Žemaitė (Who died a few years earlier in 1921) the great Lithuanian authoress who wrote about the people and supported Lithuanian nationalism at a time when the gentry considered such things as vulgar.

Close by is Lithuania’s oldest Gothic church, St Nicholas’s which was built in the 14th Century. Although I thought I was on the correct street, the name in Lithuanian — Šv. Mikalojaus bažnyčia — is confusing because it looks more like St Michael’s. We got there and found lots of people outside, all dressed up with their wains in tow. It was obviously not a marriage and people seemed to be coming and going, so we entered.

We were never sure what was going on but up front was a family with their wee lassie all dressed in white and a photographer. Child and photographer were obviously playing the game of : you are not getting my photo, yes I am. We stayed until the priest arrived and attempted to bring some order to the proceedings. Outside I tried to get a photo of the church which is surrounded by a wall and in a cramped street setting. I failed miserably and had to settle for one of St Christopher’s statue which was placed in the grounds during the Soviet period, when the City’s coat of arms (which prominently includes St Christopher, its patron saint) was banned.

That’s a lot of typing, so it must be coffee time and we found our way back to a place we had seen earlier and next to the Slough dandelion fountain. Obviously the idea had been imported by some Polish worker, or possibly the people who run the Lithuanian Shop on Slough Trading Estate !

We had hardly started on the chocolate cake when the family we had seen in the church arrived for photos at the fountain. The little girl still refusing to be remotely reasonable about having her photie took. Mother walked her around the edge of the fountain numerous times but nope, not going to smile or even look at the photographer. Forcing her was obviously not working so they just let her do her own thing, which resulted in mother having a bout of apoplexy when the lassie began climbing onto the fountain’s edge. Aaagh ! Your white dress !, obviously translates into many a language.

As we were reasonably near to the station and it wasn’t raining we decided to walk on up the hill passing the Ukrainian poet, Mikhail Sholokhov’s statue on the way. I have read his books, but wonder how they have weathered in the face of the collapse of the regime that inspired them.

We arrived on the platform and opened the gate to the outdoor exhibition. A young lady asked us if we had tickets ? We said yes and that was the end of the matter. There are some fair old brutes of steam trains here and although there are raised platforms so that you can look inside you cannot get on board (which is the case at York Museum as well, my father tells me).

The machine that impressed me most was the snow-plough. The front end was obvious enough but it took me a moment to work out that the hydraulics alongside were to push the flaps out and clear the snow well away from the track. The cabin on top looked as though it was intended to act as a refuge as well !

With a setting within the main railway station, sitting on the platform benches alongside the trains lends the impression that they could pull out at any moment. No, there is not an enormous amount to see (inside and out) but for a Euro and a bit, I reckon we got value for money.

As we came out it began to pour with rain but there was a small supermarket just opposite and we needed some filter papers for the coffee machine. We found coffee no problem but no sign of filters. We hunted high and low but nope, no filter papers. We tried asking the staff and my father produced the inevitable pencil and paper and drew what we were after. Still, no. Oh well never mind. It stopped raining and we moved on.

In the end whilst my mother and I were out shopping to find her some amber earrings we dropped into the local Rimi supermarket on the corner and there were all the coffee filters you could want — just next to the alcohol section.

Back to the apartment for a rest, but only a short one because the sun came out and we climbed the hundred metres up the hill to the Barbican. Two years ago it was a rebuild in progress, now, for a couple of Euros you get a bit of history and some fine views over the town. It consists of a tower installed in the city defence wall, underground gun ports and a connecting corridor, which turns into a 48-metre long tunnel.

The Bastion was built in the first half of the 17th century by the German military engineer, Friedrich Getkant and was used for one thing or another right up until the Second World War when it was still being used as an arsenal. 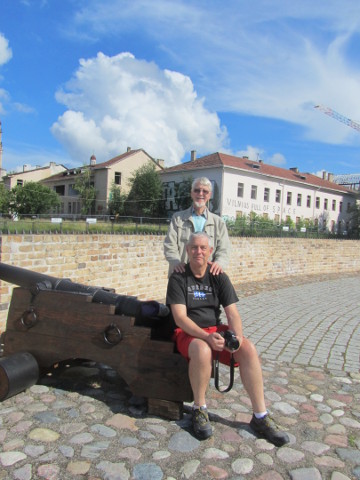 Yes, the cannon are all replicas (complete with the web page marked on them) but they still give an idea of the fort’s fire power. Down below in the corridor there are a number of displays explaining Lithuanian defences and some history of the town. I rather like the fact that part of the city wall further along the street has been rebuilt so that you still drive through it.

The biggest shock however was looking out through one of the lower gun-ports and seeing a flash car and a bridal couple in the staff car park ! As we were leaving they were arriving to have their photographs taken up on the terrace. Sadly I think that they had just missed the best of the sun up there.

Back to the apartment for a freshen up before heading out for dinner. Gabrielle had told us that tonight was going to be the finale of the Children’s Festival and that there would be a big concert up at the amphitheatre near the Three Crosses. With the weather still a bit iffy, I suggested that we went down town and eat touristy, so that we could then make a decision whether to continue up the hill for 2200 hours.

Downtown the restaurants were packed but we succeeded in getting a table at the place that two years ago managed to forget about us for half an hour (but in all fairness they did give us a decent discount for having to wait). No such problem this time and once again we had a decent meal with me attacking my two zeppellini. This is a great idea, potatoes stuffed with meat.

Thus, just after ten we set out along the front of the Cathedral towards the park entrance where there were police on duty and still quite a few people on their way up the hill. Next came the queue. Er ! What queue ? you may ask. It seemed that we were expected to pay an entrance fee, though there were no signs up telling you how much and certainly nothing about it on any of the posters or their website. No matter, if the price is reasonable we’ll pay.

We never did find out what they wanted because the line didn’t move. Both my father and I went up to have a look and it was clear that the ‘ticket office’, better known as a guy sitting in a tent, was hopelessly over powered with technology. He had his tablet, a mini printer, the modem and a cash box — with no cash in it. People were arriving to find that they needed to pay. Whatever the price was it was obvious that change had to be given against a note and he didn’t have any. When the correct amount was finally forthcoming, the buttons were pushed and beautiful tickets were printed. It was all about as fast as French Security at Dover.

In addition to the slow momentum of our ascent there was a remarked lack of either singing, applause or both. Time was moving on and we decided to call it a day and head back. Shame really. The bright side of it all being that we saw the town centre at night for the first time, lots of people out enjoying themselves with none of them falling over their own feet or lying in doorways.

The three tired bunnies reached home and went to bed. Tomorrow was flag changing day at the palace. Last time it poured with rain this time it was looking to stay dry.