The Bernadine Gardens and birthday girl

We have coffee, the day is already so much better. The formula for our morning activities soon settled into place. Breakfast. How was the pound doing against the Euro ? In theory, what was the weather going to do ?

Friday morning we decided to take Vytautas up on his suggestion and visit the Bernadine Gardens. They had not been finished the last time we were here and walking in parks also allows : sitting in parks.

Down the hill we tramped. Everywhere there seems to be construction work going on and just like back in Britain, you can’t understand a word any of the builders are saying. We did wonder where Lithuania got its builders from as most of Eastern Europe’s seem to be working in London.

It would be interesting to go back again in two years time and see how things have shaped up. For the moment though we had to content ourselves with our park. Once again, it was warm with the clouds whizzing by overhead. One moment it was sunny the next, not. But sunny was on the ascendant. Despite the proximity of the roads and centre of town we noticed very little traffic noise within the confines of the park. 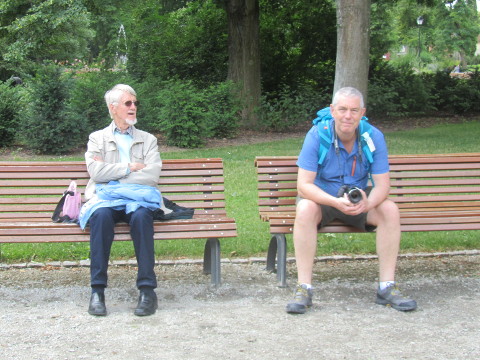 I know nothing about plants but my parents do, so off they went around the various sections of the park, looking at all the flowers and other green things (that to me looked like weeds or just bits of foliage — certainly no flowers there).

Some of them are really pretty and I noticed a lack of heavy scent which helped my, already dosed with anti-histamine, nose. We wandered along the bank of the Neris a wee bit whilst I pointed out the forest stairway up to the Three Crosses on the hillside. In the end we never did get up there, not even by road and footpath.

The central fountain was gently spraying whilst a couple of youngsters ran around the basin. Then the jets began to push the water higher, and higher yet. Every time I sat down, thinking that, that was it, it would increase the height a bit more. Another tourist was there, taking photos as well, and he had just about got the camera lined up for the perfect shot when : plouf ! The fountain went off. How I smiled. I believe the word is schadenfreude.

We continued on a wee bit more, to an extent killing a bit of time before St Anne’s church opened at eleven. 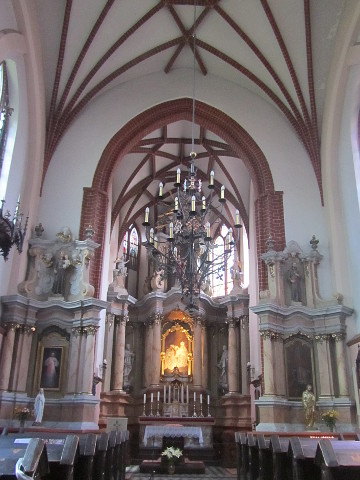 As we came around the corner we knew that the church was open, by the hordes of tourists flocking towards it. This Gothic masterpiece is thought to have been built about 1500 to a design by the Bohemian architect Benedikt Rejt. The building is composed of 33 different styles of brick creating a stunning effect. Napoleon famously said that he wanted to take the building back to Paris : on the palm of his hand.

In 2014 the interior of the adjacent St Bernard’s was rather sad looking. Covered in dust and relegated to something to visit if it was raining. I am presuming that the celebration of Lithuania’s Centenary last year provoked a major clean up because the place had been transformed with the aid of a brush and furniture polish.

All this walking around gives one a thirst — for cheesecake. Time for coffee and buns again. Then, back up the cobbled hill where we stopped at the shop where my mother had bought her amber pendant. This time she wanted some earrings to go with it and we reviewed the few that we had looked at yesterday. Ultimately she decided on a simple pair of drops on a long strand. Different to what she normally wears and for trying out later in the evening. We retired to the apartment for our moment’s pause as the weather began looking a bit bleak.

Duly refreshed we decided to go up to the railway station where there is a small railway museum. Reviews on the Internet were a bit mixed, but for a Euro twenty, what do some people expect ? Brollies at the ready we took our old back road up passed the Barbican and the music club. The dustbins had been cleared away and the wee bit of rough grass was now cordoned off for building. 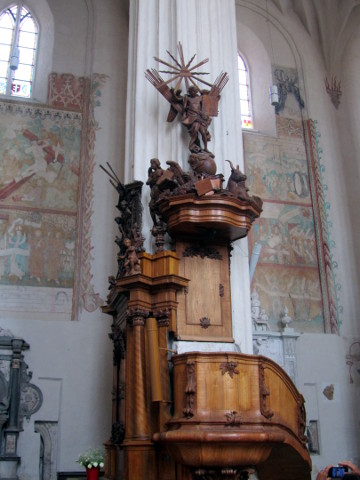 A little further along we came across a wedding couple with a very flash bright red sports car. This seems to be the thing for photos, heaven knows if one of them ever gets to drive it or where they were intending to put the luggage as I couldn’t see a trailer bar on the back.

They paused to allow us to walk through but declined my offer of relieving them of the vehicle. At the top of the street and opposite the outer wall of the Gates of Dawn our old landmark of a burned through roof had been rebuilt. How will we find our way home again ?

Arriving at the Railway Station we climbed the two flights of stairs to find that there was a stairlift for the final half dozen steps ! My parents managed to convince the lassie that they were well over the required old folks age and got in at a reduced price.

The indoor displays are nothing exceptional though some of the old Soviet styled uniforms are a touch OTT. There was a display of track laying equipment complete with a cutter which held the rail whilst you were working at it, assuring that the off-cut didn’t drop on your foot ! Seeing the samovars and tea glasses reminded me of train rides between Moscow and Leningrad.

Enough of track signalling, we want to look at the trains. How do we access the platform please ? It is closed. What do you mean it is closed ? The reason people come to train museums is to look at trains. Ah yes, but that section closes an hour before the interior. And of course you didn’t think to tell us that? If you come back tomorrow, just tell them you have a ticket and they will let you in. Oh well, sounds like a plan.

Let’s go shopping as we are running out of coffee filters. Put a pause on that, because it is chucking it down outside. We sat in the lobby until the cloud burst had passed over and then wandered over to the Iki Market opposite. We managed to find most of what we were after except filter papers for the coffee machine.

Lots of coffee no filters. My father went off to search for a member of staff. He didn’t speak English, and I don’t speak Polish. But, how difficult can it be, standing in the coffee section to indicate the desired product ? In fact, very difficult.

First he showed us a big bag of coffee beans, but at least that had a picture of a coffee machine on it. So I indicated the coffee machine, indicated coffee, and mimed putting coffee into the machine. Nope ! Glazed look spreading across eyes. He went off and came back with three other members of staff. My father pulled out a piece of paper and folded it into the shape of a filter paper. Ah ! You want coffee capsules ? Tea bags ? Ground coffee ? A notepad ? Pencils ? Cuddly Toy ?

Thank you very much for all your help. It is quite obvious you do not sell them. Giving up we dodged our way between the showers back to the apartment and prepared ourselves for the evening meal.

We had arranged for a friend, Gabrielle, to come and dine with us. She had recommended a nearby Lithuanian restaurant and was going to meet us at our abode. As you cannot just walk in I went outside and waited upon our guest who duly turned up — as ever on her bicycle.

Upstairs we made our introductions and then got down to the heavy questioning. How the feck do Lithuanians make coffee if they do not understand the concept of filter papers ? The reply : we just put the coffee in a cup, add boiling water and make sure we do not agitate the cup. Have you ever seen an eighty-six year old handling a cup without agitating it ? Oh well, we’ll ask Dmitrij where he gets them from.

Off we set for our meal. The place was packed and whilst Gabrielle chained her bike to a down-spout I asked for a table. The only one available was slap bang next to the door. Not ideal but it was going to have to do. Gabrielle had words. If a better table became free, we would be moved. Would we like a menu ? Yes please. Hello ! Can we have a menu please ? Um ! I don’t know where they are at the moment.

No menu for the moment, but we were re-seated, downstairs. The descent was via a spiral staircase with no banister, no doubt negotiated by octogenarian mountain goats every day of the week.

Finally, we got the menus and made our orders. As a starter we ordered a ‘beer platter’. Nibbles to go with the drinks. Bits of cheese, salad, sausage and pigs ears. The only person I know that eats pigs ears is Marlow, and he is really enthusiastic ; wagging his tail at the thought. I did try a couple of pieces. They didn’t make my tail, or any other part of me wag and I think I’ll leave them to Marlow.

When eventually the food arrived, it was very good but it was obvious that the restaurant had not planned sufficient staff for the weight of clients upstairs, which was bordering on the four weddings, two funerals and an amicable divorce kind of crowd.

Having finished the meal, we looked at the desert list. Ah ! Some of these deserts can take up to ninety minutes to prepare ! We can offer you an array of interesting nibbles whilst you wait. It might be better just to warn people that if they want the desert that requires fruit caramelised in beer that they need to order it before the aperitif.

The table opposite us had two plates of food on it, but the clients had long since departed having given up waiting. We decided to call it a day. There were drinks back at the apartment.

Our experience was pretty much summed up by the fact that when I tried to pay the bill, I was told that I would have to wait, because the machine was away somewhere. Good food. Total mayhem. Never mind. Meanwhile, back at the ranch, Gabrielle was telling us about a restaurant that did fabulous apple pie which was situated a few minutes walk away on the banks of the river. As we had missed out on desert, she invited us to join her on Sunday night.

The end of a good evening and off cycled Gabrielle with her birthday bottle of wine, rather precariously, I thought, packed into her hand bag. It says something though that she carries a bag that will take a bottle of wine.

What would Saturday bring ? It was looking to be a wet one.

Part 4. The ghetto and back to the railway station
Part 2. Singing in the rain