Singing in the rain

I think I can safely say that we all slept well. The apartment was always comfortably warm no matter the temperature outside and despite the fact that no heating ever seemed to come on. The weather forecast was for rain verging on storms so we got ready and prepared for a British summer. On our first morning all we wanted to do was dander down through the town and remind ourselves of the layout; the weather would decide how things progressed from there. 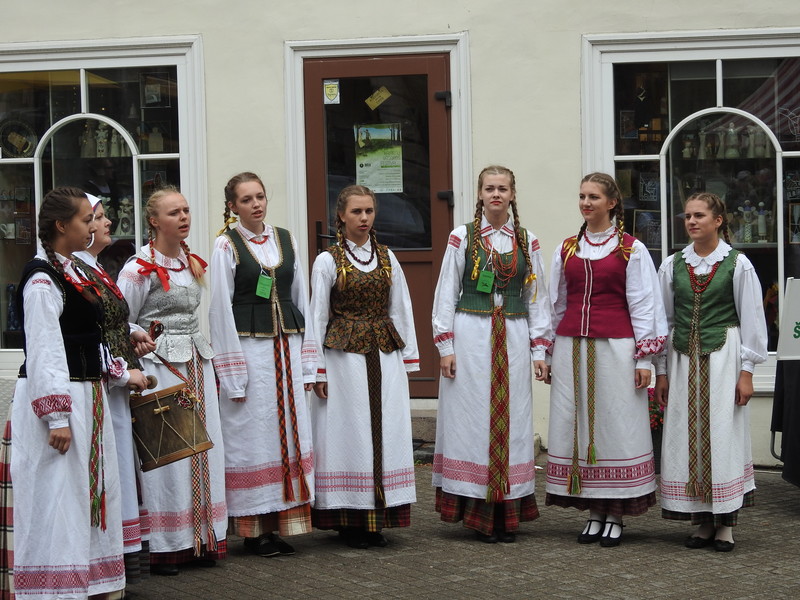 Every few years Vilnius hosts a youth song and dance festival and today was the first day. Approaching the university area we came across our first group, all in traditional costume. The sun was out and it was all very pretty even if we hadn’t a clue about what they were singing. Moving on we reached the bottom of Pilies gatvė (Castle Street) and turned left towards the Cathedral Square, behind which the sky was looking extremely black over Bill’s mother’s. Up above, it must have been windy because the clouds were scooting across the sky. One moment sunny, the next, somebody had turned the lights off. We had just reached the Cathedral when the first spits of rain began. I Know, let’s revisit the Cathedral.

Outside in front of the main entrance was another group of childer sheltering from the rain but singing their hearts out all the same. Leaving my parents to savour the interior I went out to watch the kiddies.

The rain eased off and soon their leader was getting them back out onto the square into dance formation. The onlookers were required to move back to provide space and off they went. They all seemed to be enjoying themselves and I rather wondered if fifteen and sixteen year-olds would be as enthusiastic as this back in France or Britain. I couldn’t envisage those scouts getting themselves involved.

The black clouds passed on and once I had been rejoined by my parents we spent spent fifteen minutes or so watching the dancers before setting off along Gediminas prospektas, the City’s main thoroughfare. For late lunch we decided to settle on coffee and cheesecake, leaving space for a full meal later in the evening and this became our regular habit for the holiday.

Next stop was inevitable : Marks and Spencers. We wanted a couple of bottles of red wine and that can be expensive in Lithuania. Tried and tested works best — but only if it is on special offer !

Two years ago we had never really been down to the river Neris so I suggested walking down as far as Lukiškės Square and cutting down from there. It was now more than warm and despite the flags all blowing out horizontally there was little in the way of a breeze at ground level. This was the last time I was going to be wearing my light jacket, from now on it was going to be shirt and brolly like everybody else.

We crossed the river via the pedestrian bridge alongside the Wine Box Café and walked down towards the Green Bridge. Not that I realised that this was the case because some eejit had decided to remove the old Soviet statues and replace them with an Audi car on one of the plinths. Politics !

I can understand both sides of the argument, reminders of an occupation on the one hand but part of your history on the other. The same arguments have been raised in France about the German bunkers of the Atlantic Wall. The main difference being, the statues were actually pretty good. Oh well, such is progress.

Along the banks there are supposed to be two floral displays. One says : “Aš tave myliu” I love you, and on the opposite bank it says : “Ir aš tave” I love you to. The first was a bit drab looking in the shade whilst the latter was being worked on by a team of hard working gentlemen, relaying the paths. This was when they were not sitting on their material playing cards. 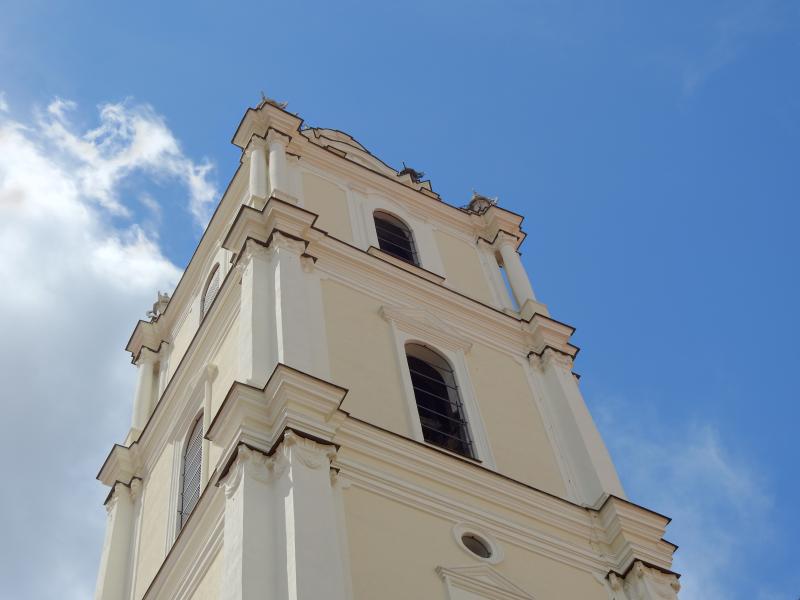 We got as far as the University with the sun still shining down upon us. Fair enough by this stage we have probably walked about eight kilometres, but it’s sunny. I enquired and yes, the lift was working in the tower. There is however a flight of stairs to get to the first floor and the lift.

There was no way that my parents were ever going to climb the timber staircase but as you go up in the lift it does sort of go through your mind that the lift is attached to beams that look pretty ancient.

It was blowy when we got up there but the view is worth the effort and panels explain what you are looking at.

Back down at floor level we continued on our walk back up the street where we found a squad of cheerleaders in blue and yellow doing their pom-pom thing in front of the town hall, with a band on the steps. Despite the Ukrainian colours it was all rather US of A (Perhaps part of a fiendish EU/USA plot against Putin). The hair was perfect, the smiles fixed in place and you could easily imagine the bitchiness that might go on behind closed doors.

I did notice that they didn’t actually chant anything. A thousand years of life to the glorious leader; May you bask in the president’s smile; Our college is better than yours, nyaaah ! The bus for England leaves at 2019 !

Enough of oom-pah because groceries needed to be obtained and we stopped at the Rimi Supermarket for the necessities over the coming few days. Milk, bread, alcohol, cheese, alcohol, coffee, some biscuits and did I mention alcohol ?

Back to the apartment for a well earned rest before wandering up the hill a bit further to visit the Gates of Dawn. I have walked under it a number of times but never made the time to visit the chapel over the arch.

More stairs ! Despite the fact that it is Catholic, the gold framed painting becomes an icon for me and it felt very Russian Orthodox. Definitely not Protestant. The chapel is tiny and I, personally, found the constant clicking of an Asian lady’s camera obtrusive whilst people were at the altar. Akin to television crews shoving a camera into your face after a tragic incident and asking you stupid questions — how do you feel after losing your entire family in the explosion ?

Coming out we were greeted not by rain but by sunshine so we walked next door to the Orthodox Church of the Holy Spirit. It is the most important of the Orthodox churches in Lithuania and one of my favourites. I love the colours of the interior. The service was taking place and the priest was chanting away at nineteen to the dozen. Does he ever draw breath ? Then the choir began singing. Only a few of them but they certainly filled the place and gave life to the building.

I personally am not comfortable with the idea of wandering about a church whilst a service is taking place, so I still haven’t managed to get close to the three saints whose relics are displayed. I find it quite amazing that some people on the likes of TripAdvisor actually complain that churches impose rules about visitors during Mass. The congregation may not be a large one these days but they are still entitled to the solemnity of the moment.

I was rather surprised to note that not all the young women coming into the church wore headscarves. My mother had come prepared and I had changed into trousers as opposed to shorts. I’ll say this though, regardless of creed there always seemed to be young people in the churches that we visited.

Enough visiting for one day and we had walked coming on ten kilometres — food.