Walking in the Ahr valley

The planning for today was for us all to go for a mini-hike in the wine growing region of the Ahr valley, forty minutes away from Bonn. As this was out towards my way home I decided that rather than take the train out and back in again, it would be easier to drive out to the end point and walk back to the start point.

I wasn’t really watching the time and simply got up, checked out and battled with the morning traffic (70 kph aye surely — a bit like saying 30 mph on the M25). Once again my GPS wanted me to drive through the Green Zone so futterin’ with the route was once more the order of the day.

I recognised the way that I had come in from the autobahn and then headed up into the hills before turning off onto a minor road. The phrase wee tiny was appropriate as I hair-pinned my way along. This is like driving in Wales.

I arrived in Dernau, so I was on the right road, and within a few minutes was at Rech, where everybody else would be arriving by train just after half-eleven. Another couple of minutes and I was at Mayschoß where our day would end with a wine tasting session.

Both villages were quite small and the railway stations were basically Halts on the single track line. I parked up at the station and had fun trying to pay for a parking ticket. I wasn’t even certain that I needed one, but it was only €3 for the day, so I kept pushing buttons until a ticket came out.

The weather had been bordering on Northern Irish during the drive out. Showers, sunshine, pouring rain, getting warm and sunny again. What to wear ? This time I’ll go for the waterproof but without the pullover.

Although the road wound its way through the valley the sides of the valley were pretty steep and high, if we were going up there it was likely to get pretty warm if the sun came out.

First things first. I needed some cash so that I could reimburse Vytautas from last night and also make sure that it wasn’t the card playing silly buggers. Apart from the wineries there is not a great deal to Mayschoß and it was bigger than Rech. Are there any banks ? The place sells booze, of course there are banks. Read screen. What is German for : “Hello I am out of order and will eat your card” ?

No worries. Whirr whirr, do have some money. Excellent. I can now buy breakfast as I have plenty of time to dander back down the road for their train. I got two good cups of coffee and a bun of some sort. No idea what it was but it was sitting next to croissants so I decided to try one. 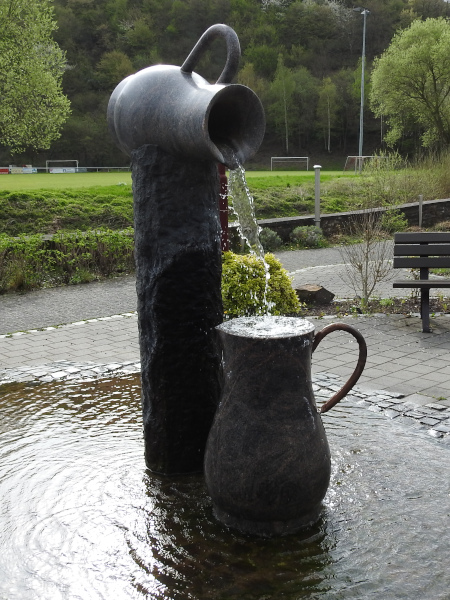 The village fountain at Mayschoß

Rather to my surprise in Germany it appeared that I needed to specify when ordering coffee that I wanted an espresso. In France that is taken for granted and the only question being : small or large.

Twenty minutes took me down to Rech which is a pretty wee place that has a statue to Saint Nepomuk. Never heard of him but there was something in the back of my mind that I knew the name. Why of course (Networked Environment for Personal, Ontology-based Management of Unified Knowledge), better known as the former indexing agent for KDE based Linux computers.

Then I think a bit more, there is a statue to him at Trakai in Lithuania. You can’t get coincidences like this in fiction because nobody will believe you.

The railway station consisted of a platform and a ‘bus shelter’ with a ticket machine. The bridge over the line had been dug up for re-surfacing and my initial thought of: we’ll manage, didn’t survive closer inspection. Granny in high heels was not going to be leaping like a gazelle over that hole.

However, there were people wandering about the far side, and the signs were there for Mayschoß via a Wandelroute. Ergo, there is an alternative way of getting up there. Off for another dander then. There is something unenticing about any establishment that announces itself as a Rotweingut. It sounds like something that you would get after a dodgy night out on the tiles as opposed to a winery.

Once out onto the main road there were little stickers here and there showing how to get up onto the footpath. Good, that is straightforward enough and only adds a few hundred metres. Back to the Halt and wait on the gang.

All gathered up and off we set. From the main road down below I had seen workers up on the hillside working at the vines. It didn’t look the safest of jobs from down there and now from up above it didn’t look any better. The terraces are made of slate and shards of the stone cover the ground. That might well help hold the heat in but it looks a nightmare to have to walk across. Later we would find out that in fact the workers are wearing special boots to secure their footing.

The Ahr Valley is famous for being Germany’s largest red wine producing area, employing the pinot noir grape (Spätburgunder). You are not going to get much in the way of machinery on these slopes so it quickly became evident that wine growing here was going to be labour intensive. It takes three weeks to harvest the same area as an hour in the Mosel.

Our promenade was not too difficult and the sun provided some splendid views across the valley towards the old Saffenburg fortress perched on the hillside opposite. Our walk eventually led us down into our lunch spot : the Michaelishof restaurant.

It was sunny so we wanted to sit outside, but the awning only came out so far so we had to make do with being a little closer in towards the building and the staff retracting the awning. Now is that tempting fate or what ?

The menu was in German so everything had to be translated into Lithuanian and English and Evaldas dropped the mini bombshell : Don’t forget, it is cash only. They don’t take cards. Good thing I had decided to get cash then. You can only borrow money off the groom so many times a marriage.

I went for something that sounded as though it would resemble potjevleesch — diced meat in a herb jelly. We get it cold with frites, they eat in warm. And it was very good. Sadly I had to stick with Fanta, though Vaidis did suggest that I could always try an alcohol free beer. But what’s the point ? It’s like drinking decaff or eating Weightwatchers lasagne. The entire objective has been removed.

Remember the awning ? Well, we had just finished our meal and were thinking of paying when — down came the rain, and it wasn’t hanging about as a wee mizzle, no this was an old fashioned gravity driven downpour. Then just as suddenly it was gone again and the sun returned.

Upwards and onwards again as far as the café where I had breakfasted. Them’ns what wanted to stop for coffee and a bun could do so whilst those’ns who were feeling more intrepid had just enough time to climb up to the Saffenberg. We would be meeting at the winery in forty minutes.

I can do climbing things and off our gallant mini-group set. The first part was easy enough along a footpath at the back of the station, then it got a wee bit steeper. Then steeper yet. And blowy, I was having to hang on to my Akubra; it’s a long way back to Aus to get a new one.

The view was worth the climb but we could not hang about for too long as we were needed down below. We couldn’t let Evaldas and the others suffer all that wine by themselves. Like nimble goats we came back down the hillside and made for the Winzergenossenschaft.

The cellars were being refurbished so unfortunately we were not able to visit the museum side of things — fast forward to the wine tasting.

I am not a great fan of German wines as I find them, in general, too sweet, but that is not going to stop me from letting someone try and convince me otherwise. The first wine was a Riesling and was actually pretty good. But white wine is not what the area is about and we progressed to the reds.

There was plenty of water and bread on the table and our host was giving us plenty of time to appreciate (as opposed to drink) the five wines that were being proposed.

I reckon that I was being pretty good because I was giving a fair amount of mine to my neighbours. We were there for almost three hours but you still can’t drink five glasses of wine and drive.

The first red that came along was okay but lacked body to my mind, the second was much more to my liking. Rather like beer I prefer my wines to be viscous. If it has the consistency of water it lacks something. The label was of a lithograph by Jean Nicolas Ponsart who toured the area and the label describes him as being Flemish which is not quite right because he was from Wallonia. On the other hand as he was born before Belgium came into existence he could have been considered Dutch.

The last wine was described as something that the locals would drink on a summer’s day after a hard day on the hillside. Brokat was so named for being like brocade, a soft wine. Perhaps it is but it was far too sweet for me. Certainly not battery acid but not my cup of tea at all.

And so, my trip came to an end. I bought a couple of bottles of the Ponsart and two others that Evaldas recommended and we all made our way to the railway station. They were heading back into town with talk of clubbing in Köln that night and I was heading back to the autobahn for my drive home to France.

It was slightly strange for me to be the one left standing on the platform as the train disappeared into the tunnel.

My journey home was straightforward and not too wet. As I crossed back into France we were funnelled into an inspection zone by the Belgian authorities. Here we were given the chance of driving very slowly passed a pair of Belgian Border control vehicles that had obviously had enough of stopping vehicles all day.

Shortly before midnight I reached home.

An imaginative and memorable wedding — for all the right reasons.

Page 1: Back to the beginning